I’ve had this kit for over a year and still haven’t made anything with it. sigh

Make sure you shake the bottle before printing, the pigment can settle after a while

Veeeery interesting. I assume by the fact that they’re only printing on white fabric that it’s more or less not a great product for darker fabric? Not really into the whole cheery-colors-only thing either but not going to rule it out. It looks fun if nothing else.

My wife and I have been playing with this stuff. Line art is reliable and turns out great. The color palette is nice.

However, for photos on transparency, I find you really need to pump up the contrast of your image in a photo editor (and adjust the brightness) for best results.

In the future, everybody will be Andy Warhol for 15 minutes.

I saw a similar product - Somay-Q in Japan this year (In Tokyo Hands store). The results looked really good. http://imgur.com/a/9Svrv

Like you, I bought it and have never gotten around to using it. But I did find a slightly cheaper product in more colors from a tie dying website. 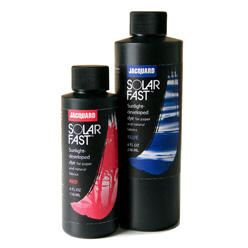 SolarFast is a dye designed to come to life when exposed to the sun. Paint it on, cover areas you don't want the color to show and let the light shine on down!

I can’t look at this without thinking of PCB etching.

I hope they expand the line of pigments to include Cyan, Magenta, Yellow and Black so people can experiment with full color process printing.

We’re coming out with black and other darker colors in a few weeks! You’re correct in assuming Inkodye works best on light fabrics. The color is subtractive and because it’s a dye it becomes part of the fabric itself, not a paint that sits on top.

Also note that the Lumi app has a fun augmented reality feature that allows you to see how the color of dye will blend with the color of shirt. This can yield some fun effects when printing one color on top of another.

Magenta and black will be coming out for the holidays. We’ve already had some luck doing 3-color process with red, blue and orange but it works best for certain types of imagery. Here’s an example: http://www.kickstarter.com/projects/lumi/print-on-fabric-using-sunlight-the-lumi-process/posts/266315

Clever! I assume that process involves washing the fabric between colors?

Correct! It’s best to work with a woven material (vs knit), because the registration can be challenging. There may be some easier ways to get a full color print with Inkodye, but we’re still in the early days of experimenting with that.

I remember this from the kickstarter, and was (and am) really interested in it. I saw it in an art store somewhere subsequently and was really tempted to buy some… but for me the price is still too high.

And, for example, unless you’re able to command $50+ for a t-shirt (as some artists and designers can, make no mistake) it’s clearly not meant for commercial use. Which is fine - I assume it was always meant for people to relatively easily do one-off stuff for themselves without the hassle of creating screens etc. for screenprinting (meant inherently for mass production).

But still… do you expect the price to come down at all? I see in comments above there are other companies coming out with similar things (though if in the US my only other option is Jacquard I’ll pass… not a fan of products of theirs I’ve used in the past). If Inkodye wants to continue targeting the certain market it is now I can’t really complain (and I will be picking some up to try eventually anyway), but when I first heard about this through the kickstarter I had hoped I could use it to make limited-run art shirts for sale (in the ~$20-25 range). So I’m wondering if that will ever be a possibility or if I should just break down and make a silkscreen setup.

By the way, as for full-color printing, I would think part of the charm of doing it this way would be slightly-off alignment colors like an old cheaply printed comic book (used for artistic effect in a lot of 60’s pop-art as well).

You bring up good points! All of which we’re very actively thinking about.

Firstly, we have a Partner program through which you can purchase gallons of dye at a much better price per ounce. At the moment you have to have a reseller’s license to be approved, however we are thinking about making gallons available to general public as well. Would love your feedback on that: http://partners.lumi.co/

There already are a number of pros using Inkodye and we’ve started featuring some of them in a YouTube series: http://www.youtube.com/watch?v=CkF4QyB3Is0

Finally, on November 1st the 16oz bottle will be available for the holidays at a special price of $19.95! (down from $32) It’s something we’ve been working towards for a long time, and now our volumes are finally big enough to start bringing the prices down.

If my response seemed a little unenthusiastic … well, I’ve been thinking of almost nothing else since then. If I get the energy together, I’ll definitely be trying Inkodye out by the holidays.