If you needed further evidence the World as a whole is going to shit? Well here it is…

This is in Mexico. You’ll find it in far too many other places, as well.

I just saw a documentary about Guatamalen gangs that discussed a similar neighbourhood patrol group. I had the same reaction: so sad that people have to do this just because a bunch of arseholes won’t let them live in peace and because the state isn’t interested in protecting 80% of the population.

I’ve read that some self-defence groups in Mexico have turned into mafias themselves.

In the documentary mentioned above the armed neighbourhood patrol was charging the local shopkeepers a protection fee that amounted to about 10% of what the local gangs were previously extorting from them. It’s easy to see how the patrol could morph into a different kind of shakedown crew. 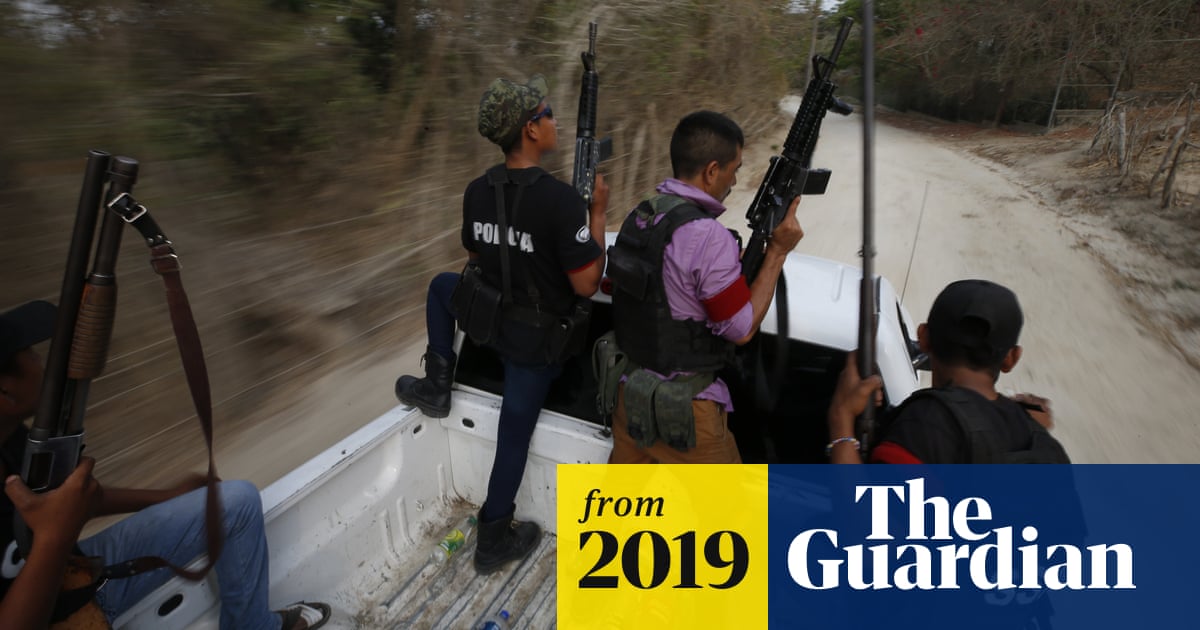 In southern Mexico, a toxic mix of gangs, vigilantes and cartels is fuelling rising violence. ‘Community police’ or ‘self-defence’ groups, often accused of having ties with drug cartels, have proliferated and extended their control over the...

Isn’t this the reality of the “good guy with a gun” second amendment nutters’ wet dreams? Seems, uh, sub-optimal.

An army of good guys with guns, who feel that they deserve to be generously rewarded for their service to the community.

If only the US would end the War on Drugs.

Or Mexico… just be like, fuck it, make your drugs. We want a cut, and you can legally export it wherever. (How they get in to the US or Europe is their problem.)

Also, this is why I don’t fault people trying to “sneak” into the US. I’d do the same thing, probably.

What do you suggest they do when the government cannot or will not defend them from armed and extremely violent criminals?

Especially in areas where the armed and violent criminals are the government?

“People sleep peaceably in their beds at night because rough men stand ready to do violence on their behalf.”

How many of these rough men are there? Are they single?

“People sleep peaceably in their beds at night because rough men stand ready to do violence on their behalf.”

Unless one is Kipling, that situation isn’t seen as an entirely optimal one (certainly not by Orwell, to whom the quote is misattributed).

Anarchists aside, most of us grudgingly accept the state’s monopoly on violence when the state has some degree of democratic legitimacy behind it. Such legitimacy which allows for the possibility that the “rough men” who act as agents of said monopoly may be disciplined if they over-step their bounds.

In any case, the patrols here are not made up of “rough men” but desperate ones who are alternately victimised and abandoned by Mexico’s rough men

What do you suggest they do when the government cannot or will not defend them from armed and extremely violent criminals?

Especially in areas where the armed and violent criminals are the government?

You’ve missed the part where the good guys with guns realise that they can use their guns to take what they want.

Since all law and all government in any form originates from the people, when a government fails to do what it was created to do, the people have little choice but to start over or to do it directly.

One must never lose sight that a government, any government, is just a bunch of people we hired to handle things we want done so we can get in with doing other things.

If they fail at their task, they should be fired just as any other hired hand would be.

If they fail at their task, they should be fired just as any other hired hand would be.

And that optimally should happen through a regular transfer of power, not by desperate groups of armed men. Especially when a failing state apparatus still remains in place and makes a pretense of democratic processes.

No-one here is blaming these people for forming patrols. They’re saying it’s a far from optimal situation and one not worthy of Kipling-style romanticization.

But I thought that this was what the US militias were doing.