I was genuinely sad when he died. He had his schtick, but it was sincere, and he never punched down on anyone. And his casting as Jed Clampett in the Beverly Hillbillies movie was inspired.

I saw all of them. They were in heavy rotation in the evangelical community because he was clean and way, way funnier than any Christian comedians or movies.

For a fuller picture see if you find his commercials with the never seen Earnest. “My daddy worked on them things.”

“The first true generation” my Aunt Fanny. As a child of the '60s I can state categorically that television ruined us first and you Millennials are just a bunch of poorly dressed also-rans.

Absolutely. Same here. I looked forward to seeing his big films in theaters well into my late teen years and I remember never turning off the tv when his myriad of commercials were on.

Caught a great vid a few years back on how he and his troupe of actors were able to make a name in commercials. In short, they masterminded a formula, and filmed them by the dozens in a short span of time. Pretty much one set location and a small band of funny people.

I recall watching the film Mississippi Burning and almost having a spit-take when character actor Gailard Sartain, who I always associated with funny, bumpkin roles, especially in the Earnest films and commercials was cast, and totally believable, as a racist sheriff.

A few years back I though my grade school daughter would get a kick out of Earnest Saves Christmas (one of my favorites) but nah. (Grumblegrumble kids grumblegrumble don’t know what they are missing grrrrr….) lol.

Anyone who has a problem with the younger generations needs to go take a long, hard look in the mirror; because whatever is “wrong” with them is the fault of the generations who raised them.

Is that why you have such bad manners?

And I remember taping (holding my tape recorder up to the speaker on the TV) the Gee I’m Glad It’s Raining song. It was amazing.

I’m getting the feeling that Devin is really really young or had a very isolated view of things based on his posts.

His career trajectory was like an SNL alumni despite not being on SNL. He had a lot of different characters that he’d regularly do, and one I recall is Dr. Otto, with the creepy hand on his head.

He even had his own kid’s TV show, though it only lasted one season. 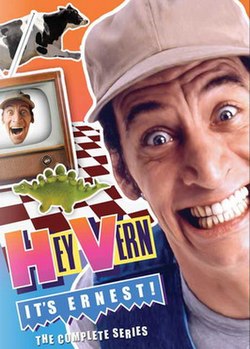 Hey Vern, It's Ernest! is an American children's television program. It aired on Saturday mornings on CBS for one season in 1988. Each episode involved short sketches on a certain theme or scenario, featuring Ernest P. Worrell (Jim Varney), his unseen friend Vern, and various others. The filming locations were in Nashville, Tennessee and Burbank, California. It was a production of Ernest creator John Cherry's production company, The Emshell Producers' Group, in association with CBS, and was co Va...

Glad he got that late-career revival as the voice of Slinky Dog from the Toy Story movies. It was also nice that his close friend Blake Clark was able to take over that voice role after Varney passed away.

Oh, I vaguely remembering that being on… Not sure if I ever watched it, though.

The material was so-so, but his delivery and expressions always got a laugh out of me.

As a Gen-Xer, I can both agree with you that prying kids away from the boob tube was always an issue, decried in the Seventies and Eighties as well, but also smirk and say… okay, Boomer.

Sure, we all like to think we were the first, as the Sixties had television as the main boogeyman, the Seventies with more color, and the Eighties introducing VCR’s and Ataris to the mix. But I also have to give Devin credit that the Nineties saw the first generation of kids whose parents were also raised by television, and thought nothing bad of it.

Oh, and as for Jim Varney, I always think of his “Hey Vern!” commercials first, as they hinted at a richer storyline. But to my shame I never saw it, because by then I was already in Germany and cut off from North American media.

That was for Braum’s where I lived, but the first place I saw the commercials (when I was about 12) was for Purity Dairies in Nashville. I thought that was the funniest thing I’d seen, at least up until that point. I kept telling my good-humored teacher about the ads and before long we were seeing them where we lived.

Even though I was at an age when I thought I was getting too old for Saturday morning cartoons* I tuned into that every Saturday morning. I also had the distinct pleasure of meeting cast member Bill Byrge at a local movie theater one afternoon. I was there to see a movie; he was asking if they had any posters from the most recent Ernest movie that hadn’t been thrown out yet. 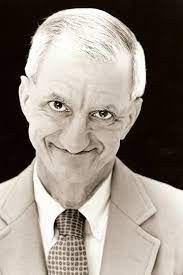 Anyone with any interest in Varney should read what I think was his last interview in the Nashville Scene. An interesting, but not surprising, thing is he really wanted to play Hamlet. It’s unfortunate that by the time he reached a point in his career when he could have made that happen it would have been treated too much as a joke, but he was quite a serious actor.

*Of course no one’s ever too old for Saturday morning cartoons.

Not sure if you were making an ice cream joke there.