So DO SOMETHING ABOUT IT.

All evidence says that they were caring, intelligent beings who cared for the less fortunate and treated them with dignity. The complete opposite of the current TGQP.

And smoking hot too, judging by the number cross-matings our ancestors had with them…

Does 1980’s Mel Gibson know this guy stole his hair?

So DO SOMETHING ABOUT IT .

publicly shaming abbott is doing something. words matter. ( ex. otherwise nobody would care a fig about qanon )

i think it might be time for texas democrats to start a recall campaign.

Our cousins are misunderstood…

Perhaps surprisingly, Neanderthals must also have been caring: to survive disabling injury or illness requires the help of fellow clan members, paleoanthropologists say. A telling example came from an Iraqi cave known as Shanidar, 250 miles north of Baghdad, near the border with Turkey and Iran. There, archaeologist Ralph Solecki discovered nine nearly complete Neanderthal skeletons in the late 1950s. One belonged to a 40- to 45-year-old male with several major fractures. A blow to the left side of his head had crushed an eye socket and almost certainly blinded him. The bones of his right shoulder and upper arm appeared shriveled, most likely the result of a trauma that led to the amputation of his right forearm. His right foot and lower right leg had also been broken while he was alive. Abnormal wear in his right knee, ankle and foot shows that he suffered from injury-induced arthritis that would have made walking painful, if not impossible. Researchers don’t know how he was injured but believe that he could not have survived long without a hand from his fellow man.

This is going to play as well as “deplorables.” Not that it matters, of course, the no-mask-nutters will make a stink regardless of how he phrases it.

Waiting for governors in other states to double-down and lift mandates too as a show of solidarity with idiocy. 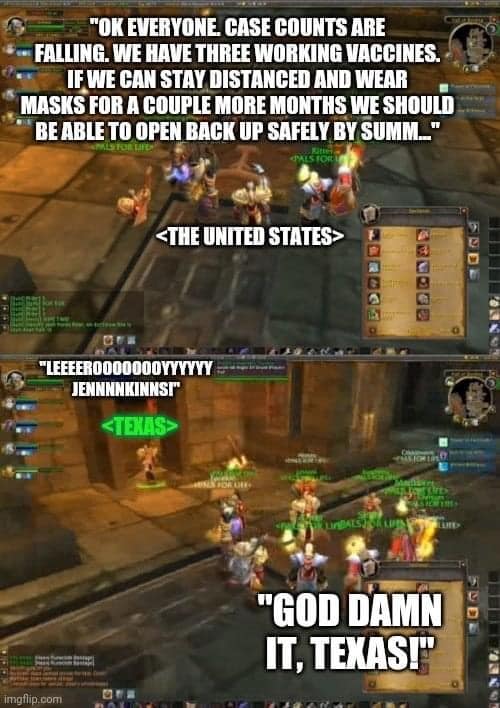 “I don’t understand” doesn’t mean “I require more information.” It means, “you must be wrong.”

Anthropological evidence tells us that Neanderthals cared for and looked after each other.

Yes, but I’m pretty sure they didn’t understand germ theory and I’ve seen no evidence they would have worn face masks in the event of an outbreak. So at least the behavior is neanderthal-like, even if the motivation is cruel and deliberate ignoring of how to help people rather than innocent ignorance of it.

i think it might be time for texas democrats to start a recall campaign.

There is no provision of the Texas Constitution for the public to recall any state official, much less the governor. The governor also has very little power in Texas, when you get right down to it.
Both points are a good reminder that not every state operates like your state, whatever is. We are not all experiencing the same lockdown.

It’s also worth noting that Gov. Abbott lifting the “mask mandate” changes very little compared to the current mode of operation. County and municipal orders still apply – though Abbott’s executive order still denies them the ability to impose fines – and stores continue to do whatever they think is safe. Stores were already open. Schools were already open. Frankly, I didn’t even notice there was a state mandate until Abbott lifted it.

Lifting the mask mandate (on Texas Independence Day, no less) was basically political theater to keep pace with DeSantis.

On the ground, the only thing that has changes is that bars can open come March 10, right before Spring Break. So that runs a huge risk of attracting a bunch of super-spreading college partiers to Austin and Galveston.

Which forms of funding specifically do you suggest Biden attempt to withhold from Texas?

Just be open and say it.

Yes, but I’m pretty sure they didn’t understand germ theory and I’ve seen no evidence they would have worn face masks in the event of an outbreak.

Yeah, and on top of that, so what if what he said was somehow precisely inaccurate about Neanderthals. He could have said troglodytes or cavemen/people, and the point of his analogy would have been the same.

Hmm, should be something that would disproportionately annoy his supporters.

Are there any federal subsidies for, like, NCIS box sets?

All evidence says that they were caring, intelligent beings who cared for the less fortunate

Even the outdated Neanderthals from The Clan of the Cave Bear were reverent and deferential toward healers and their specialized knowledge. If a shaman told his group they had to wear masks to ward off evil spirits they would not argue or hesitate.

Which is a little ironic since you could make an argument for the 19th and 20th centuries being a long era of repeated arts and crafts ‘revival’ movements.

For the Heads that may be true, but it’s always a niche for those who can afford it. The Hands have been deindustrialised and cast aside into low wage jobs (if they were lucky) and the Hearts paid minimum wage and put on zero-hours contracts.

The mantra ‘go to university’ has for too long been the advice for everyone to follow even those who are not intellectually inclined. This further elevates the status of the Heads and makes clear that society does not ascribe equal value those who work with Hands or Hearts.

Both points are a good reminder that not every state operates like your state,

my state has been texas in the past

, and you’re right – i don’t know the ins and outs of texas government. i just assumed you could do that in every state, when it’s only 20 of them. the texas legislature could always impeach him – but the bar is rather high to say the least. ( and obviously, that’s not happening anyway. )

The governor also has very little power in Texas,

it’s power enough. texans don’t need him to jump tall buildings, or run faster than a train. just enforce the cdc guidelines. that he can do.

County and municipal orders still apply – though Abbott’s executive order still denies them the ability to impose fines – and stores continue to do whatever they think is safe.

stores like heb will do whatever makes them money.

the whole point of a mandate is not relying on individual actors to make the right decisions, because the casual decision of a single individuals harms the whole community – exactly like allowing factories “self regulation” of pollution.

and, as i’ve said it’s very hard without a law to enforce masking in a grocery store. i’ve been there and done that. it puts employees like me in danger.

Both points are a good reminder that not every state operates like your state,

my state has been texas in the past

, and you’re right – i don’t know the ins and outs of texas government.

To be clear, I wasn’t singling out any particular person: I juat notice that in the past commentors tended to assume a certain baseline common experience that just doesn’t hold. For example, in most states the governor can grant a pardon, but not in Texas…In some state liquor stores are state-run, but not in Texas. And so on.

As for the pandemic itself, I noticed the Texas experience started to really diverge from my other points of reference (where I have family) in California, Rhode Island, and Pennsylvania after about 3 months of “lockdown”. (Or maybe 2 weeks of lockdown; who knows. Time became a foreign concept for a while.) The more strict the lockdown was in <you, the reader>'s state, the more lifting the mandate seems like a a surprise leap.