He also appeared in three of director Bert I. Gordon’s films: “Tormented,” “The Boy and the Pirates” and “Village of the Giants.” 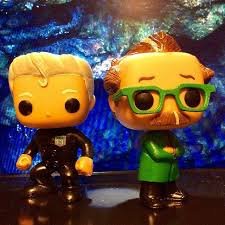 @FrankConniff
Such a good actor. He was in a couple of MST3K-riffed films and lots of TV shows and movies including Blade Runner and THREE Kubrick films (might be the closest thing to a repertory company member Stanley ever had). He got around. Rest In Peace, Joe Turkel. twitter.com/Variety/status…

“Village of the Giants” - a Surfite sighting…

A comment on Deadline site: “Met him at Izzy’s Deli in Santa Monica and begged him to tell Kubrick stories. Sweet, hilarious man. God Bless, Joe.”

To Lloyd, the best goddamn bartender from Timbuktu to Portland, Maine.
Or Portland, Oregon for that Matter.

I was thinking of him just the other day when I seconded the recommendation here for “Paths of Glory”. Another amazing performance from this fine actor.

Obligs…
The light that burns twice as bright burns half as long.

" The light that burns twice as bright burns half as long - and you have burned so very, very brightly…", Eldon Tyrell, as played by Joe Turkel in Film, Blade Runner (1982)

Perhaps obligatory, but a good snap shot of an actor acting, in a world that nobody had ever seen the likes before.

It was what I was going to post, along with some commentary, that I will add shortly.

That scene always moved me, and I remember it to be the first time I think I used head canon to get around the unfathomable parts, like how did

Blade Runner keeps popping up in my life. I have an object that was on that set, a well as Alien and other movies, and as we just moved, that object has been misplaced (I hope). I watch the film more often that I should, but when my father took me to see it, it was amazing and immersive, and unfathomable in many ways. It was the first film that father and I differed on an opinion of a film. He hated it, and this scene was one of the ones he recoiled from. I look at the list of movies and TV shows he worked on, I realize that I have met people that he would have met and worked with on those shows, people much older than me and that are now likely lost to times progression.

Over time my opinions of the film have changed. I am still irritated that it shares some of the same sound elements that Alien did, because for me, they were different worlds. I still find the Deckard and Rachael love story repulsive, I have friends that find it ridiculously sexy. And the Tyrel death scene still moves me. Tyrel was a great character that appeared for next to no time in the film and was brilliantly played by Turkel- even as a kid I saw the arrogance of someone that allowed themselves to let their method of death into their own home because they thought they knew better and could control the situation.

Turkel’s life was long and reads as though his death was less violent than getting shot in a western or having his skull crushed by a replicant combat master while having his eyes spout comically large amounts of blood as they are gouged in.

He appearently has a memoir coming out later on this year called The Misery of Success and I think I might give that a read, though I would rather hear the book delivered in his voice.

Great as the doomed French WWI infantryman chosen at random for execution by a chateaux general in Paths of Glory. Kirk Douglas was good too.

I think he was fooled into letting Rutger in by Sebastian.