The problem is not that Trump has so much crime to hide (although surely he does).

The problem is all the other criminals whose crimes will be exposed when Trump’s crimes are exposed, and the lengths they will go to prevent this from happening.

Some of these other criminals will be wealthy powerful men; some of them will be public figures such as Senators, Congressmen, governors, mayors and attorneys general; others will be captains of finance and industry; yet others will be Mafiosi.

We have lost every one of those wagers so far. All of them. And there have been many!

Nixon got forcibly sneezed out of the Presidency like a hardened booger, and with good reason. Yet he ended his days a revered statesman.

What would Trump have to do to sell you on impeachment ?

Shoot someone on the street in NY ?

Here’s a good reason to begin impeach proceedings, regardless of the Senate or the outcome: 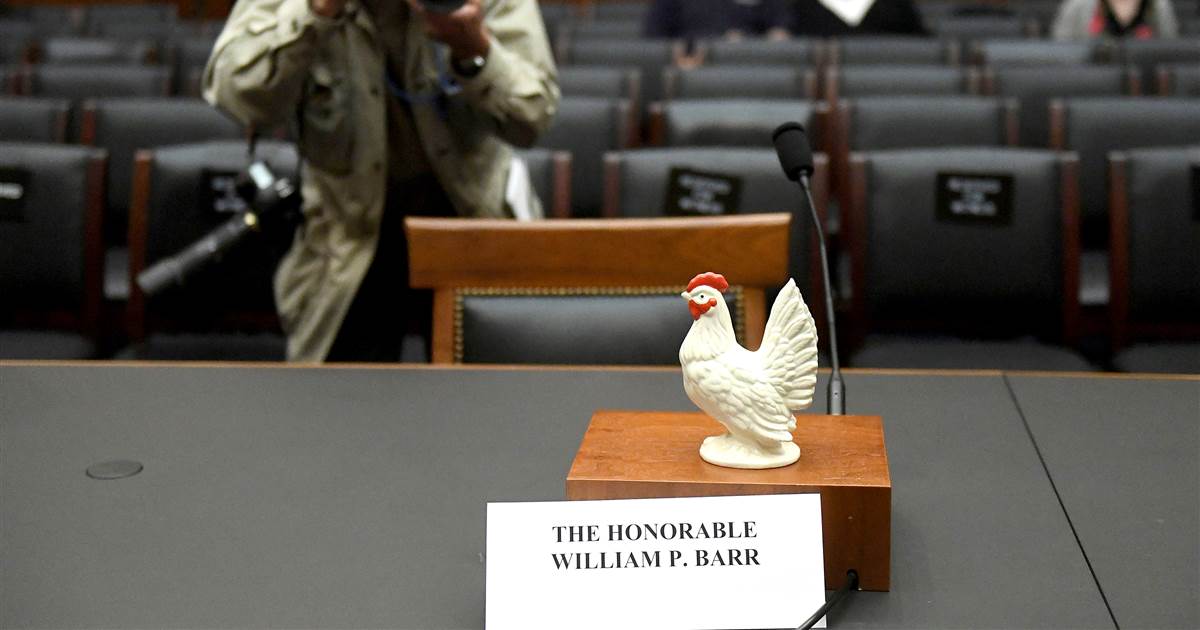 In this fight, not acting to preserve its powers as a co-equal branch of government could relegate Congress to subservience in perpetuity.

Because the current Congress has not authorized an impeachment inquiry, the ability of the House to enforce its subpoenas or to punish Barr is sharply circumscribed. History affords Congress maximum power only when it is investigating a possible impeachment.

I didn’t say I’m against impeachment either. We got rid of Nixon without impeachment. But we were on the road there, with articles drawn up in committee and getting ready for a vote–in other words, things were rapidly moving forward as the public was becoming educated about the need for impeachment and their support for it was growing. That’s the approach to take here, not jumping the gun because we feel like we need to take a specific actions.

And btw it’s “shoot someone on 5th avenue” specifically.

Again, I don’t know why Dem leadership is so weak/useless on this: Force an Impeachment vote. List all the charges. And then MAKE every Republican in the Senate stand up and put their name to the idea that fraud, self-dealing, crony capitalism, obstruction of justice and violating the constitution spirit and letter both are fine with them. Then run the footage of McConnell and every other Repub saying how they won’t impeach a man who is so clearly, demonstrably guilty because they get tax cuts and judges and war funding from him, 24/7, leading up to the 2020 election.

But Nancy Pelosi would rather help Biden get elected than protect the nation. It’s disgusting.

And therein lies the dilemma: shall we expose are we capable of exposing the entire Oligarchy as criminals?

I always wonder why Hackers go after political campaigns and Bitcoin; have one capable person wipe out the banks of the Virgin Islands, Cayman Islands, Switzerland, etc, etc, and see what happens to the 1%. …*

I would speculate that the security of your average bank is far better than your average political campaign. That most banks (particularly well funded ones) are not particularly low hanging fruit.

I mean, Wells Fargo hasn’t been hacked yet, if that is any indicator…

I don’t understand how the DOJ so blatantly acts like the White House Counsel.

We got rid of Nixon without impeachment.

Nixon was a terrible person that did many terrible things, but I firmly believe he believed in the institutions he represented, believed in governance, and when backed into a corner was basically shamed into resigning.

Trump doesn’t believe in the institutions he represents and wants to see them fall. He’s a nihilist through and through. He has no shame. He wants to see the world burn. He will fight until he either becomes a full-blown despot or the R’s he enables finally wake up and actually fucking do something.

“The attorney general could have redacted parts of the Mueller report to protect presidential confidentiality. He didn’t, and now’s too late.”

The White House asserts executive privilege over the Mueller report, and House Democrats move to hold Attorney General Bill Barr in contempt. Republicans revive allegations of spying on the Trump campaign. And Israel says it attacked a building...

thinks the democrats are wasting their time.

What Is a ‘Protective’ Assertion of Executive Privilege?

I don’t know my American history for shit, but I find these Nixon comparisons to be cold comfort. Correct me if I’m wrong but aside from running some crooked election interference, Nixon at least wanted to be president right? And wanted to be a good president, and cared whether America as a nation prospered, correct? Trump is a walking charicature of a 3rd world dictator, obsessed with himself and his appearance as a leader-type above all matters of state, and using his position to loot the country for his personal gain.

I mean, Nixon resigned. I just. can’t. imagine. Trump doing that. And every subsequent tweet reinforces that. If norhing else, this presidency had squashed whatever semblances of Americam Exceptionalism were buried in the recesses of my mind. Not only Could It Happen Here, it feels like him taking his best shot at fake-medal-bedazzled psycho on a balcony seems like the only future I can imagine with any clarity…

To be fair we don’t have to chip away at his base much for him to lose the next election. His approval rating has been consistently hovering between 35 and 45 percent. If those few rational centrist republicans can’t stomach voting for him it might be enough. Of course we’ll also need a democrat strong enough that people aren’t staying home for similar reasons.