…and next time, we’ll be more careful (so that nobody notices).

What they hell were they doing with these things?

You joke, but I thought about going by real quick to make sure there wasn’t cuneiform tablet I could use to protect my wood coffee table.

They do sell clay,and wooden sticks, so you can make your own tablets. Religions are easier to follow if you make your own rules.

Thou shalt not eat of the cauliflower plant. Kept that one for decades!

That reminds me of Dmitiri Martin and how he made up a list of goals and giving him self points for meeting them. Only he wasn’t meeting them, so he just lowered all the goals so that he was succeeding.

Surely the religious exemption applies to this law.

What they hell were they doing with these things?

I can’t remember his name - but isn’t there some conservative billionaire out their buying up US historic original documents so he can put his spin on history- and maybe someone wants to hide some of them that tell inconvenient stories.

…and next time, we’ll be more careful (so that nobody notices).

I once moved from coast to coast “book rate”. A lot of cheaply shipped boxes of stuff later…

Yeah, if you’d told me that the crappy dirty Michaels wannabe where I bought dusty jars of Mod Podge would be leading the battle for religious-based laws and smuggling religious artifacts to open a massive Bible museum I’d say you were kookoo.

And if you’d told me that they were possibly funding ISIS by buying millions of dollars of illegal artifacts from Iraq…?

I’m glad they’re coughing them up, but this is outrageous: Hopefully Iraq gets them back, and scholars can examine these and the historical/cultural value of them be known and preserved.
But now these tablets lack their archeological context, and in the process of looting, other tablets were likely destroyed. These things are fragile, and precious: Cuneiform is the first recorded writing system, starting at about 3000? bce, and clay tablets such as these are the sole source of important works such as Gilgamesh. A small number of tablets/fragments survived across the millennia, and there were likely many to start with.
So more extant tablets means further light shed on this remote time, from the very old cities of what’s now mostly Iraq. I can really recommend reading some of this primary source material, even as a non-scholar (such as I am): There are records of legal cases, strange religious stuff (like Descent of Ishtar into the Underworld), correspondence between family members, diplomacy, even tablets of students scribes learning their trade. Laments for fallen cities (such as Ur, Nippur), where people describe their gods abandoning them. It’s amazing, illuminating material. Some sites have translations posted online. Victorians got into this material in a big way because it related in ways to biblical material, so there are a lot of old translations.
These tablets are the product of human minds thinking and writing a very long time ago. For various reasons, people either remain ignorant of this or look the other way for this stuff to happen, and however it happens the result can include the eclipse of a mind or even its permanent erasure. Yeah, let’s not.

Better be careful. CNN may reserve the right to out you later.

They’re sending things that have lots of problems and they’re bringing those problems with us.

So Hobby Lobby has been funding ISIS? … it’s a strange world

I don’t even understand this. I guess a privately-owned company can do whatever it wants with its capital, but why buy Middle Eastern artifacts, stolen at that?

Why doesn’t the article personalize it in some way, because its not “Hobby Lobby” buying these items, it’s “David Green of Hobby Lobby” doing it.

Did Green do it for the very reason that, should there be a lawsuit, the company has liability and not himself? (How is that legal?)

If only someone from the Lawfare podcast read this blog…

Sounds like they should have known better from the “too good to be true” prices.

Fundies wary of something that’s too good to be true? Good one.

Well at least it was going to a museum -

Well at least it was going to a museum -

AKA not a real museum, but a shrine to theocratic pseudohistory. 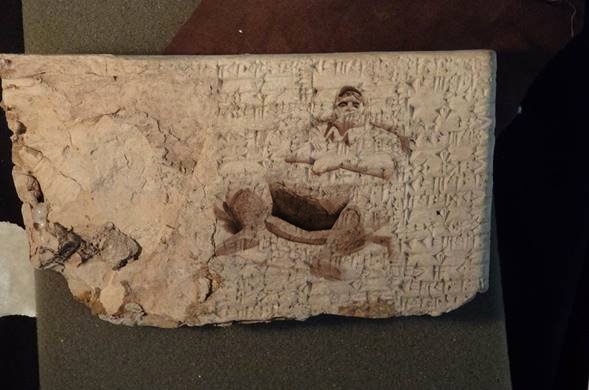 Is that Chris Christie sitting on a beach chair in cuneiform? Brilliant!

Surely the religious exemption applies to this law.

Gorsuch and Co. will get right on that, I’m sure. Maybe if Hobby Lobby claims a religiously motivated reason for smuggling…

Matthew 24:43 — But understand this: If the owner of the house had known at what time of night the thief was coming, he would have kept watch and would not have let his house be broken into.