"Ten minutes of stupid and terrible behavior" at any age can not only define a life, it can destroy one.

Unfuck that guy; I hope his bad karma is painful a/f when it comes back to him.

Yeah… un-fuck this guy with that great and lonely void that will swallow any remnants of his festering and tattered soul.

A right wing man who does not think women should have control over their own bodies is revealed to think women are sexual objects rather than people.

What a completely expected and forseeable turn of events!

eta: fixed a horrible typo that reversed what I was trying to say.

But he has such a nice hairdo! 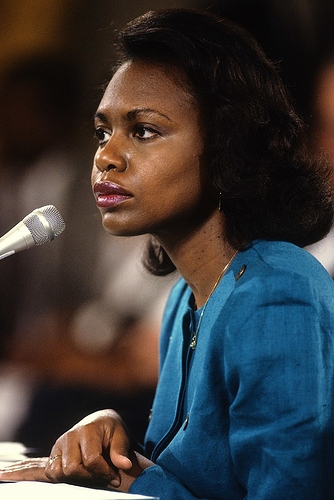 Indeed. I wouldn’t be surprised if this poor woman gets called to testify. In fact, I seem to remember from Thomas hearings, that it was a letter, released to the FBI, that got Anita Hill called to testify at his hearings, and that they had been re-opened because of it… I’m not a fan of the old trope that history repeats itself, but in this case, it might be accurate. As it stands, the GOP is just doubling down and calling it nonsense.

Well, you see, it’s a matter of semantics and labels…/s

Come on folks. Wake up. The Lord and Savior Donald Trump has said that you can grab them by the pussy and they will just let you do it. It is not like it was a full blown human being, this was a female! He will probably get some high fives in the locker room for it, but there will be no adverse consequences. Just more proof that women should have no control over their own sexuality. She obviously tempted him, the slut!! (/s for any who need it.)

So, all, this is why the nomination and evaluation process for a SC justice should move deliberately, not be rammed through before the composition of the Senate changes due to the midterms.

Imagine if the story had broken 2-3 weeks later. We’d be stuck with the man, there’d be no recourse. Maybe we are still stuck with him if Republicans don’t break ranks, but at least this becomes something which’d extract a credible political price later on.

Like Mark Twain observed, it sure seems to rhyme a lot though, albeit through deliberate machinations of the moral vacuum that is the Republican party.

His double negative confuses me, though. I assume he meant to say that he doesn’t think it does defines a life. Which I’d agree with for many stupid and terrible things, but not an attempted forcible rape, ffs. That’s not “stupid.” It’s not, “I was ignorant and wasn’t thinking and - ooops, I accidentally got together with my buddies and planned out and tried to enact a rape attempt on someone!”

@Mindysan33
What’s interesting is I see people on both the right and left bringing up Anita Hill, but with very, very different notions about what happened and what that means, with the right seeing it as a defense of him (while apparently having no idea what actually happened at the time, either). Your recollection about Hill is correct - she spoke truthfully to the FBI when they did the background check, that information was made public, then she was called to testify. The right are acting like she publicly came forward on her own initiative to attack him. They’ve got their own alternate reality.

And, it certainly provides plenty of cover for any moderate Democratic sens who might have been on the fence about voting no. (Manchin, Doug Jones, etc.)

Every day Trump occupies the oval office is an argument that it doesn’t matter.

sending the message that ‘sexual assault and harassment doesn’t matter.’

As it stands, the GOP is just doubling down and calling it nonsense.

i’m a great believer in the adage “never attribute to malice what can as easily be explained by stupidity.” but in this case, stupidity seems to be ruled out by the fact that there are literally a dozen or more judges from the federalist society who are just as white, just as male, and just as far right as this excreta that walks like a man.

I believe Ms. Ford. If the Republicans cared at all about doing their job they would pull the nomination without further ado.

Those like Tom Nichols who say they believe Ms. Ford but somehow think the assault she details shouldn’t be disqualifying, need to think hard about Kavanaugh’s present day response to the allegation. His categorical denial indicates that in all the years since high school, he hasn’t evolved; he still doesn’t understand today why what he did then was wrong. No one with a moral compass that badly damaged should be given a judgeship, let alone a seat on the Supreme Court.

oh sure go ahead and teach high school boys that whatever they do doesn’t matter later, that should end REALLY well - some “family values” right there

this lying piece of garbage has concluded long ago that it’s okay to do or say WHATEVER he needs to, as long as he can get control over women’s bodies

this event still pales in comparison to him purposely trying to force a CHILD to reach the point where she could not legally have an abortion despite her clear right to do so immediately and limit the physical distress - it’s RIGHT ON TAPE clear as day, how is that not disgusting to every single person voting for him, what is wrong with these people

I’m sure that as a judge Kavanaugh has had a lot of opportunities to weigh in on the degree to which “Ten minutes of stupid and terrible behavior when you’re 17” should be permitted to affect one’s future – or lack thereof.

I certainly hope the Committee has a chance to ask him this. I would also like them to ask Tamir Rice, Michael Brown, and far too many others. Unfortunately, I don’t think they’re available to testify. Maybe the “Central Park Five” could be brought in?