Kevin McCarthy failed to get House speaker votes. In fact, Hakeem Jeffries received more than he did

Originally published at: Kevin McCarthy failed to get House speaker votes. In fact, Hakeem Jeffries received more than he did | Boing Boing

Whoo, if this convinces a few fed-up folks on the right to vote for Hakeem Jeffries, that would be epic!

I read something that they don’t even need to do that. The wording on the calculation of the winner is something like “the person who receives the majority of the votes cast” so it’d only take a few (5?) republicans voting ‘present’ to drop the total number of votes cast and automatically making Jeffries the winner if all democrats are voting for him.(Pelosi has won in the past with less than 50% due to this)

Dunno. Jim Jordan just voted for McCarthy. I suspect the next round will be the last.

ETA: I was wrong.

If this dimwit finally ends up winning he’s just not capable of keeping this bunch of opportunists, cowards, and lunatics disciplined.

so it’d only take a few (5?) republicans voting ‘present’ to

And isn’t he taking the lead with the caveat that any 5 randos can unseat him? So this is likely, at best, the beginning of his short reign?

he’s just not capable of keeping this bunch of opportunists, cowards, and lunatics disciplined 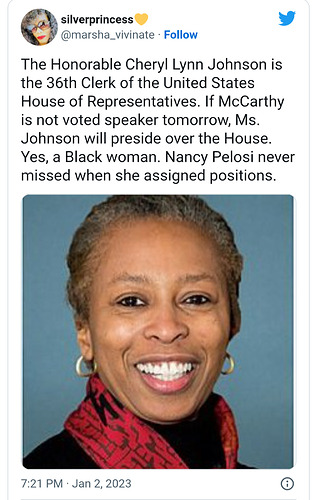 Pace yourselves. Apparently the 1855 Congressional deadlock that ended with the election of Nathaniel Banks as Speaker took 133 ballots.

I’m sure he felt he earned the speaker ship by the hard work of being a lickspittle to Trump. Maybe he’d be the undisputed Leader if he’d actually, I don’t know, shown leadership.

McCarthy May eventually have to cut a deal with the Dems to win. I wonder what concessions they’ll demand?

Why am I picturing Sam Kinison right now?