They are familiar with the Eagle here in the ATL, I see!

This is so OMG I CANT EVEN that I can’t even put up a gif.

I can’t really judge from this one quote alone, but this kind of confirms what I suspected about her-- that she is power mad, and not just in a county-clerk-bureaucrat little-dictator kind of way, she thinks she is wielding God’s power on Earth as some kind of Crusader.

That part about “if the Lord doesn’t return first” is kinda funny, as if The Rapture will come and she will be spared jail time.

she thinks she is wielding God’s power on Earth as some kind of Crusader.

This. This is pretty much what any fundamentalist thinks. They are living their own fantasy story in which they are the hero, struggling against all the forces of evil arrayed against them.

Our greatest writers would kill to be able to paint such a vivid picture using subtext alone. I feel like there’s no detail of her life that I couldn’t guess from reading that. The hot-glue gun, the cats, the rapt attention paid equally to church sermons and overblown network TV shows; it’s all in there.

I am confident that God is in control of all of this!! . . . I need a backbone like a saw log!!…They are going to try and make a whipping post out of me!!

Uh oh, is this some kind of 50 Shades of Davis sexy talk?

if the Lord doesn’t return before then

do Christians/Evangelicals really believe in armageddon or is it mostly a figure of speech?

Evangelicals and fundies certainly do. To them, it’s like when mom and dad promise the kids that they’ll go to disneyland next summer to get them to shut up and behave. They just are willing to accept the trip after they’re dead. Just as long as they get to see their enemies tortured by locusts with human faces, horse legs, and scorpion tails. Seeing the torture from heaven is their reward for being good christians, in their estimation.

I think run-of-the mill Christians, like the laissez-faire Lutherans I grew up around realize that the crazy stuff is all metaphor/symbolism. I don’t know what’s up with these Evangelicals, but they are legion, and they take it all quite literally. Well, the parts they choose to read, anyway.

Kim Davis is overloading my creep-o-meter.

Uh oh, is this some kind of 50 Shades of Davis sexy talk?

You have no idea.

Now no chastening for the present seemeth to be joyous, but grievous: nevertheless afterward it yieldeth the peaceable fruit of righteousness unto them which are exercised thereby.

-quoted from a website which shall remain blessedly nameless.

I’ve been meaning to read “A History of the End of the World”, which is apparently all about some of the nastiness that has been perpetrated by those certain that Jesus is gonna come back real soon now.

Reagan’s Secretary of the Interior, James G. Watt, supposedly thought ecological conservation was unnecessary because the rapture was imminent, though in searching for a source just now, it seems that might have been an exaggeration. 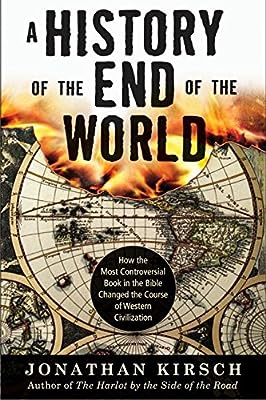 A History of the End of the World: How the Most Controversial Book in the Bible Changed the Course of Western Civilization

"[The Book of] Revelation has served as a "language arsenal" in a great many of the social, cultural, and political conflicts in Western history. Again and again, Revelation has stirred some dangerous ...

I don’t know what’s up with these Evangelicals, but they are legion, and they take it all quite literally. Well, the parts they choose to read, anyway.

As for the letter, I’ve met a few people who write like that. Some foreigners in China make transparent word replacements in their emails to fool the government, such as using “Daddy” for God. Yeah, I know. One of the most conservative people I know writes like this. She’s an ‘ex lesbian’ and strongly supports Kim Davis.

Bad thing is there are people who think this that are running for public office. Just imagine someone like her in the Oval Office with that kind of power.