Laser "distresses" a pair of jeans

I don’t mind that they try to sell pre-worn trousers if there’s market for it.

. I was prepared to accept some discoloration, as normal new-looking jeans have been nearly impossible to get for some years, but actual holes? Come on, if I want trousers with holes in them I would just not buy new ones. And those idiotic fake crease marks which don’t even line up with the actual creases which will form after a while, as shown in this movie of a moronic machine. aaaarghgrgrgrbl. Just stop it and sell me normal new jeans PLEASE.

Sorry 'bout that. Had to get it off my chest after yesterdays failed trouser hunt.

I ordered some online.

(1) They are new off course. At least, you pay the price for new trousers.

What’s the word in English for “clever, but totally ridiculous?” 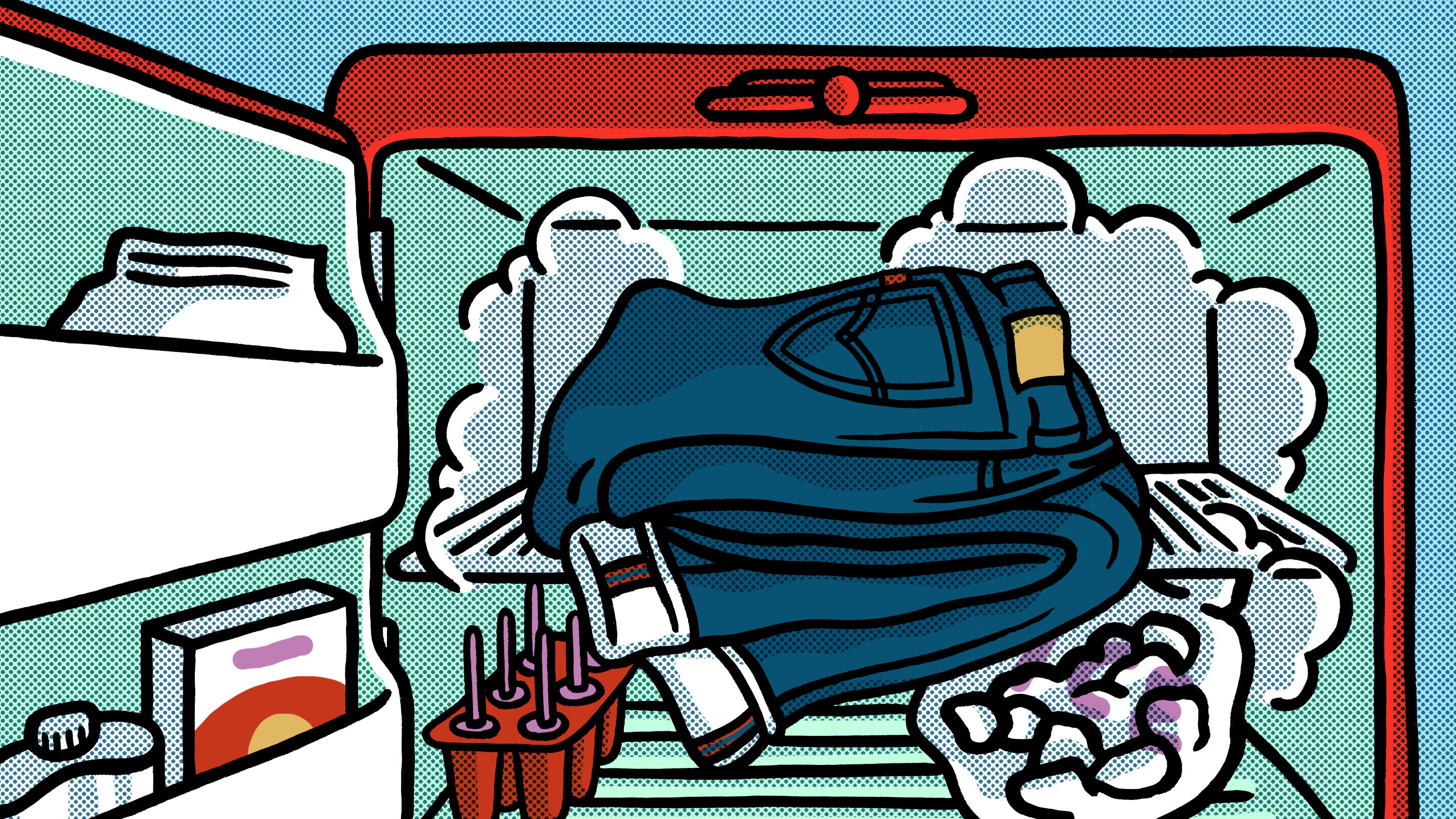 Arguing that denim should not go in the washing machine. Why one editor doesn't wash her jeans - and thinks you shouldn't either.

how to make jeans look cool and authentically patina-ed without having to wear them every day for six months without washing them.

Wow, I can’t even imagine being that fashion-conscious. Is the whole magazine like that?

No, Mr Bond I expect you to have the authentic worn-in appearance.

Lasers used to be so cool.

I hope the machine is voice activated when someone yells out “DISTRESSOR BEAM!”

Says the person who never spills coffee, gets their knees in the dirt, etc.

So, I really I don’t think you need 2500W to abrade denim (unless the 2500W refers to the overall power consumption of the entire machine… that I might believe even though it’s a pretty worthless thing to tout other than “ooh big number”).

I don’t know about you but I’d prefer to machine wash away the crotch swill of my jeans rather than freeze them.

For the majority of people the whole “do i wash my jeans” thing is pointless, most people aren’t buying high quality raw denim. Someone that spends over $100 for really good jeans will likely want to make sure to do everything possible to maintain them and that they wear appropriately. I don’t like to spend more than $50 on pants, and frankly i don’t give a damn as long as they don’t rip on me within the first year or two, i don’t care about the fading and whatnot.

This is generally only going to be important to people who are extremely fastidious about fashion and/or quality jeans.

That has to be the most vapid and pointless article I’ve ever read. I feel stupider now.

(No reflection on you for posting it of course.)

Now you can have the casual look of $10 thrift store jeans, without having to put that bothersome $90 change back in your wallet!

I will say that, with some jeans, washing will make the dye uneven, like a bad acid wash pattern. Maybe it’s just cheap dye.

I only spend about $30 a pair, direct from Lee. Their denim is still somewhat heavy, unlike the thinner material that Old Navy et al have been using the past 8 or 10 years.

As for pre-distressed clothing, perhaps there’s a market for pre-masticated chewing gum?

I remember reading once (maybe it was in David Marx’s book Ametora: How Japan Saved American Style?) about a denim company employee who stopped a regular guy in the street to ask if he could buy the pants off him, right there, right then, because the “whiskering” (the wear pattern where the leg meets the top of the jeans) on his jeans was just so.fucking.cool, and the jeans company guy wanted to take them back to the lab and figure out how to reproduce that whiskering on a mass scale.

Anyway. I got my last pair of jeans (plain, dark, no pre-wear, no premade holes) at Alcalas, on Chicago Ave. in Chicago, which is one of our old-school Mexican western gear stores. And who else was shopping there at the same time? A Japanese guy who had come on pilgrimage, basically, to buy the Real Deal in American western jeans & gear.

Japan produces a lot of high quality raw denim, likely better in quality than what you’d typically find here in the US though i’m sure buying such a thing in Japan would cost an arm and a leg. I had a phase a few years ago where i did a lot of reading online for where to buy quality denim and Japan regularly pops up, and some small manufacturers in the US.

This reminds me of a Japanese friend of mine. He lived in Vegas and to fund his trip to Japan to see family he bought some Levi’s pants and a couple expensive Red Wing leather work boots which are apparently fashionable and extremely expensive there. Red Wing in fact sells some special models that are only found in Japan. Anyway with reselling the boots alone he’d be able to have his trip paid for.