Lavabit founder Levison: decision to close was like 'putting a beloved pet to sleep'

“I mean, there’s information that I can’t even share with my lawyer, let alone with the American public. So if we’re talking about secrecy, you know, it’s really been taken to the extreme.”

I’m pretty sure that this isn’t how ‘due process of law’ is supposed to work.

I still think we’re better off than we would have been with the republicans in charge … but … damn it! Obama, you’re making it really hard to like you lately. Even with the gay support as a major plus, you (or your administration) is just doing too many things that I despise

Looking ahead to next election, Hillary is starting to look like a blinking genius for getting out of the Obama administration before all the shit hit the fan. Wonder if she’ll manage to avoid it all sticking to her.

EDIT: Sorry. Was not meant as a reply to fuzzyfungus. Hit the wrong button.

As a Texan, i’m so happy this guy is out there showing that not all of us are crazy.

Looking ahead to next election, Hillary is starting to look like a blinking genius for getting out of the Obama administration before all the shit hit the fan. Wonder if she’ll manage to avoid it all sticking to her.

Hillary’s going to be linked tightly to Bhengazi and the lies that went through her department on it. They appear “coverupish” , and that’s a bit too much like the Obama administration to let her be free of the taint of the Obama government.

Add into that it appears like she left in disgrace, well… yeah.

I’m hoping now is the time for a third party to really make a showing. But I doubt it.

NSL’s are a direct attack against the constitution and free speech. American’s are not used having their speech suppressed. I encourage and hope Americans basic libertarian instincts kick in big.

American’s are not used having their speech suppressed.

Yes, we are most definitely used to having it suppressed. We’re so used to it that this thing is not nearly as big an uproar as it should be. Remember, many thought J. Edgar Hoover was RIGHT. And that was 40+ years ago.

That “I can’t even discuss it with my lawyer” part is classic government overreach. It would never ever survive a court challenge.

I hope these guys bring this all the way to the supreme court. They can show actual harm, which is very difficult in these cases because so much of the information about the case is classified. This is definitely an area where some checks and balances are in order, and they’re certainly not coming from the Congess.

Until it’s you and then you scream from the rooftops. I stand by my statement, Americans want to speak their minds. What do you think we are doing here?

I think you are channeling Fox News, dude.

I think you are channeling Fox News, dude.

Actually , no. I’m a democrat, parents are work with the democratic party, and we’re good friends with people “in the know.”

It’s no secret that Hillary was asked to leave the administration after the Bhengazi incident because she was deemed a liability. She was allowed to dictate her exit because she’s been a pretty awesome person for the cause. It’s pretty common knowledge.

That “I can’t even discuss it with my lawyer” part is classic government overreach. It would never ever survive a court challenge.

Which is presumably why they try to discourage you from obtaining the services of a lawyer… It’s total bullshit; but law is complicated enough that representing yourself is a good way to snatch defeat from the jaws of victory under most circumstances. Ideally, you call their bluff, bring in the lawyers, and win; but it’s a deliberate strategy to force you to risk whatever the penalties are in order to mount a meaningful challenge.

If you listen to the DN section where Goodman interviews Nicholas Merrill, he spent six years fighting the gag order he received, so that he can speak about only some parts of it now: 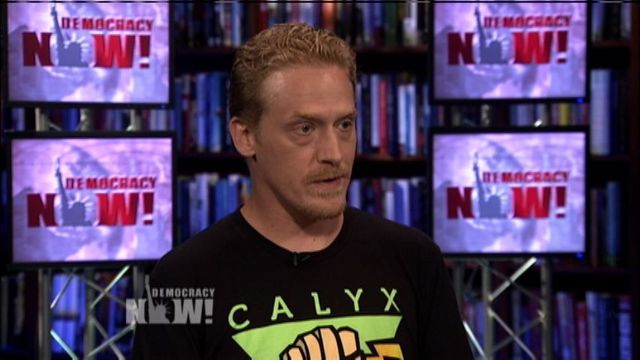 We continue our discussion of government surveillance and Internet privacy with someone who was under an FBI gag order for six years. In early 2004, Nicholas Merrill, who was running an Internet service provider in New York called Calyx, was issued a...

I’m hoping now is the time for a third party to really make a showing. But I doubt it.

I’m still waiting for people to name a viable third party candidate who isn’t a wacked-out libertarian, much less make an actual showing.

I just don’t think we go from two GW Bush terms to a third party win anytime soon. We were sent backwards by decades. We’re still living in an American reality where the media was rather easily able to sway the public against OWS. We’ll be lucky if we can get someone who’s isn’t a right-wing zealot in the next election because there might very well be a stupid backlash where people throw their votes away and/or vote the greater evil in as a knee-jerk reaction to this shitty Obama administration.

Libertarian? Sorry, I think quasi-governmental corporations and other corporatists have ridiculously too much power as is and it’s been an unmitigated disaster for everyone except those at the top.

The actual definition of libertarian is whatever the most people who are using the term dictate it to be. The “ideal definition” doesn’t really matter if it’s not feasible in reality.

For the rest of world we use a dictionary.

I get the sense that Lavabit will be like the Twinkie.

Cute experiment: Start a new service called… wait for it… “Lavabit”. It does not matter what this service does.

When the cease and desist letters show up you will find out how dead Lavabit really is.

Weep not for this lil sickly poodle that no one knew, for it will be back.

Or, we could go by the most common, modern use of the word…

Ok, nevermind. I enjoy trite, semantic arguments about as much as I enjoy watching this.