I like that this is a NY State move too. It puts Cohen under pressure from an angle that most sources agree Trump can’t pardon him out of.

I also love how this is most likely directly tied to Stormy Daniels, and the continued pressure being applied in public via her very sharp and savvy lawyer.

Edit: Ah, it appears I misunderstood - this is still Federal. It’s just the Federal part that represents the Southern District of NY.

I do expect any charges here that aren’t pursued federally can and will be shared locally - but that’s just my guess, I’m definitely not a lawyer.

So much Fake News about what is going on in the White House. Very calm and calculated with a big focus on open and fair trade with China, the coming North Korea meeting and, of course, the vicious gas attack in Syria. Feels great to have Bolton & Larry K on board. I (we) are

Russia vows to shoot down any and all missiles fired at Syria. Get ready Russia, because they will be coming, nice and new and “smart!” You shouldn’t be partners with a Gas Killing Animal who kills his people and enjoys it!
8 Likes
SARdog 11 April 2018 20:40 #6

From a form FBI agent: “I’ve been an FBI special agent for 20 years and have only seen a handful of searches executed on attorneys. All of those attorneys went to prison.”

“You shouldn’t be partners with a Gas Killing Animal who kills his people and enjoys it!”

Says Trump, a man who gleefully removes medical coverage from millions of Americans, many of whom need it to live. I guess if he’s not lobbing nerve gas directly at them after taking away their ability to get healthcare his conscious is clean. “If they all up and die, I don’t see how that’s my fault.”

Jesus fucking Christ. I can’t believe this guy is our president. You would think that sensation would have worn off by now, but that scab gets torn off everyday.

Its simple.
This, all of this, is not normal.
It will never be normal and it must never be normal.
So it is completely legit that you do not get used to it.

This RollingStone article exposes all the corrupt shit Cohen is involved in. It reads like something out of a Hollywood script.

I always suspected the real story lies in money laundering for Russian mafia but…Holy Shit! If even half of this is true, Cohen may just be the final link to bring it all crashing down. 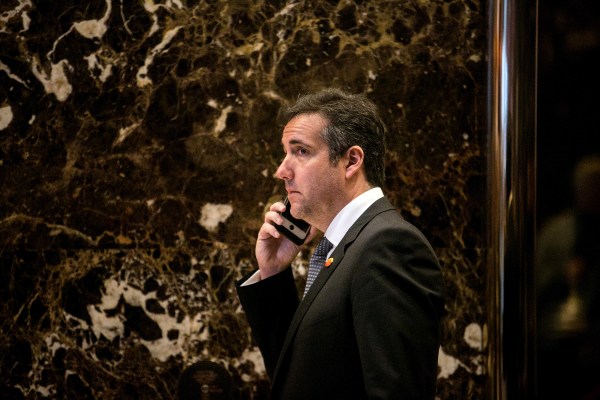 From the Russian mob to money launderers, Trump’s personal attorney has long been a subject of interest to federal investigators

This is indeed yuuuuuge. The mechanics involved in pulling this off were huge. For a “normal” attorney, in order for this scenario to have to happen to them, you’ve got the referring prosecutor, the prosecutor, usually five or six steps of oversight (bosses of bosses and their bosses and so on up to the region/circuit level), and the judge. Each of them will review the prosecutors request, and each level up has progressively greater consequences if they “get it wrong”. The judge could be disbarred or prosecuted for “getting it wrong”. So everyone has a vested interest in getting it right. Then there’s the “dirty” team that serves the warrant and collects the data that matches the warrant while ignoring the rest (they’re unrelated/unentangled with the prosecutor’s office in order to preserve other attorney/client privilege that still exists outside of the scope of the warrant), then there’s the “clean” team back at the prosecutor’s office that looks through the information to determine the scope of wrongdoing and develop the charges that will be brought. That’s a boatload of people who end up touching this sort of thing.

But now step it up to a federal level because the attorney in question is that of POTUS. That’s a BFD, of the ginormous variety. The fact that none of this leaked out to POTUS himself ahead of time, given the number of people that had to have touched this to get it this far… that’s nothing short of a miracle. The highest vetting levels of it were his own appointees. So not only is it not a witch-hunt, it’s apparently significant enough to both make it this far and not leak out in the process. Did I mention, that by any reasonable math this is a ginormous BFD??? Holy shiite.

Popcorn futures have got to be through the roof, even with tariffs.

I like that this is a NY State move too. It puts Cohen under pressure from an angle that most sources agree Trump can’t pardon him out of.

This is not a State action, this is a Federal action in the Southern District of NY. The can not pardon thing does not apply. The title of the article is “FEDS Raid…”

It is just not a Mueller probe action, but it is still a federal action, federal courts, federal prosecutors, federal agents. And totally pardonable if charged and convicted.

There are all kinds of good reasons for Mueller to have handed this back to main Justice who then determined that yes, we must pursue this and we just happen to have an office in the SDNY that can handle it.

My Attorney’s Getting Arrested

The highest vetting levels of it were his own appointees.

They know that things are so obviously unlawful and corrupt that they have to approve the charging of the obvious criminals in this case or be potentially charged themselves somewhere down the line. For the judicial officers involved there’s party and personal loyalty, then there’s simply egregious right and wrong.

Sure I’ve got the phrasing wrong somewhere. But whenever you hear something like that. Southern District of NY, Eastern District of Illinois (I actually don’t know how Illinois is divided). It indicates what chunk of the Federal Court and DOJ systems is involved. So that’s your rule of thumb. They’re talking about cardinal direction + district + state. Federal.

“I’ve been an FBI special agent for 20 years and have only seen a handful of searches executed on attorneys. All of those attorneys went to prison.”

I know some one who executed a search warrant like that. Once. In 40 years. A lot of people went to jail. This does not happen. And you can’t make this happen unless you have, as I was told today, “a fucking head shot”.

Precisely this. ACP is sacred, and the bar to pierce it is incredibly high. Nobody’s going to get a warrant - especially not for the personal attorney of the sitting POTUS without some seriously compelling evidence.

Popcorn futures have got to be through the roof, even with tariffs.

Good thing we have all those corn subsidies.

Might I recommend some mighty fine popcorn out of Murray, Kentucky where my grandparents used to live? It’s really great!