A Skeletool was my main construction tool in the lab. We built all of our animal enclosures and video monitoring rigs on the fly, and minor adjustments done under time pressure were a regular feature. An always available screwdriver/pliers/knife is a very handy thing in those circumstances.

These days I work in the bush instead of the lab, and keep it in my bag rather than my pocket. It still gets used for the occasional motorcycle thing or powertool field repair; I used the pliers to sort out a broken chainsaw last week.

Presumably Leatherman noticed all the other high-end multi-tool brands selling for between $100 and $150 and decided that adding blacked steel and gun maintenance tools justified a 100% markup from the Skeletool. It must be better, it’s more expensive! /s

I heard about the visible carry thing — even the protruding half inch of a folder clipped to the inside of your pocket can get you stopped — but I didn’t know about the locking blade prohibition. Is it on blades that lock open or closed? Was that one of Bloomberg’s misguided “public safety” initiatives?

when I hear the phrase “nanny state,” but that guy was like a cartoon version of what people mean when they use it.

There’s a puzzle about the skeletool: the large component (pliers) works really well, but the smaller one (scissors) is a piece of garbage: the scissors are too loosely to cut anything, and the nail-file blade is very poor at filing nails, and useless for filing anything else (so much for the multi-use aspect…). Myself, I carry a swiss army knife with a scissors blade in addition to the skeletool pliers: the poet’s choice on multi-tool use.

Probably the main thing I do with these tools, though, is open packaging: everything these days comes sealed in paranoid levels of plastic, getting things open is a lot easier if you just cut the stuff, rather than challenge your teeth and nails…

It looks sweet, but won’t take the place of my Wave. The biner type without a holster that also holds the insert bit set loses half the utility of the Wave. I also use the file and diamond stone pretty frequently, as well as the teeny screwdriver. Used the latter just the other day on my mom’s jammed bracelet safety chain. If they made the Wave with those replaceable cutting jaws it would be perfect.

Heard a story from a manager at a setbuilding firm of getting arrested in the Port Authority Bus Terminal because a cop saw the top of a clip knife in his pocket. Crazy out there, after that I realized I’ve been lucky riding the trains with a Leatherman on my belt.

My customized Juice XE6, stripped of one whole layer of tools. I took the non-serrated blade, the combo can/bottle opener, and the corkscrew, and made a separate picnic knife out of them. Then I ground the serrated blade down into a marlinspike, making this a bladeless tool (if you don’t count the saw; surely the TSA will differ). The marlinspike unties loaded climbing knots. The pliers tighten bolts at climbing anchors, unscrew stuck locking carabiners, and finesse crampon straps with gloves on. The saw and wood awl give me the peace of mind that I can fashion an emergency shelter or rescue litter if needed. The diamond file works wonders on fingernails. 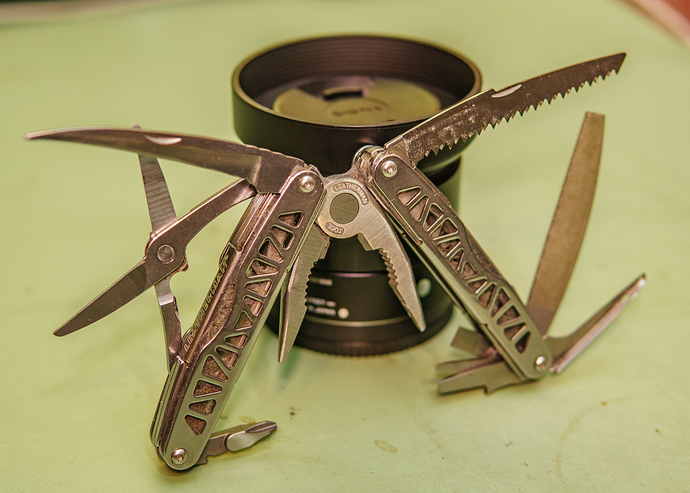 My customized Juice XE6, stripped of one whole layer of tools. I took the non-serrated blade, the combo can/bottle opener, and the corkscrew, and made a separate picnic knife out of them. Then I ground the serrated blade down into a marlinspike, making this a bladeless tool (if you don’t count the saw; surely the TSA will differ). The marlinspike unties loaded climbing knots. The pliers tighten bolts at climbing anchors, unscrew stuck locking carabiners, and finesse crampon straps with gloves on. The saw and wood awl give me the peace of mind that I can fashion an emergency shelter or rescue litter if needed. The diamond file works wonders on fingernails.

Cool, except for the lack of an actual knife blade. What if you need to cut something in that emergency, like rope, or shape a piece of wood? A knife is the most basic of survival tools.

I have realized that for myself there is no one-tool solution. Oh we got Benchmades and Spydercos and Opinels and Cold Steels and Beckers and Moras and Bokers… Knives that color coordinate with certain shirts, knives that are shaped like whales. All tokens of my begrudging devotion to the one true god whose name is technology.

it’s never the right tool, but it is the right now tool.

There’s a toilet plunger on that thing?

Nearly cut the side of my thumb off with one of those very parachute cord hooks when I was a young. Quite a scar.

Did… did you confuse your thumb with parachute cord?

So, the legislature banned switchblades, and things that were close enough, and the cops and the DA interpret this as if they can possibly get the blade to flip out, it’s an illegal switchblade. Here is a case where the courts eventually threw it out https://www.washingtonpost.com/news/volokh-conspiracy/wp/2014/07/25/new-york-court-sets-aside-gravity-knife-prosecution/

I discovered that NYC has a local law making illegal lock blades and visible carry.

Gulp. Does NYC have extradition rights against a UK citizen for multiple violations six months ago? Asking for a friend.

It’s a long story Had the hook open and tried to pick it up, it had got wedged between two things and my thumb slid as the knife did not so the side of my thumb (around the in-side of the knuckle) that touched my index finger while grasping was, briefly, a flappy part.

That’s completely orthogonal to the point. But yes, there were no other tools available when I fixed the elevator control panel, and some of the cars.

I took some pictures to illustrate the point of a pocket multitool over the weekend.

Saturday I was replacing portions of floor that I cut to get a honeybee colony out a couple months ago. I had to shim it between the 1901 floor and the 1990s floor, and I wanted to reset the ryoba to 45° to cut the shims in place - I could have gotten to my feet and walked across the room to get pliers, but instead I pulled the leatherman out, did the job, put the leatherman back in my pocket. Without thinking. 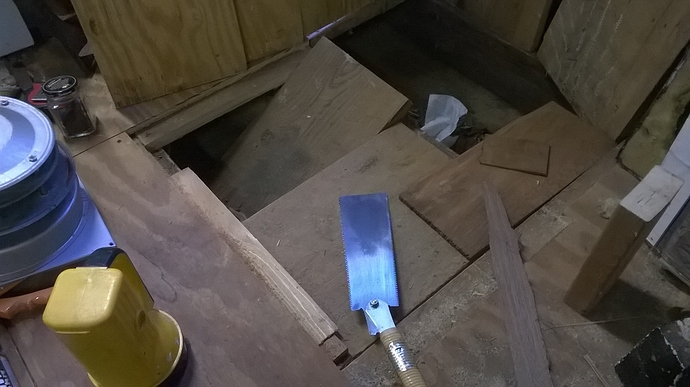 Sunday I was rebuilding a set of three permanent magnet motors, and I had to design a jig to pop the commutator end caps off, because the shaft bearing’s in a blind hole. The jig body is a 9" piece of toilet drain pipe, with a 1.25" hole drilled in the side. I needed to pop the PVC plug out of the hole saw on the drill press - I could have walked across the room to get a screwdriver, but instead I pulled the leatherman out, did the job, put the leatherman back in my pocket. Without thinking. 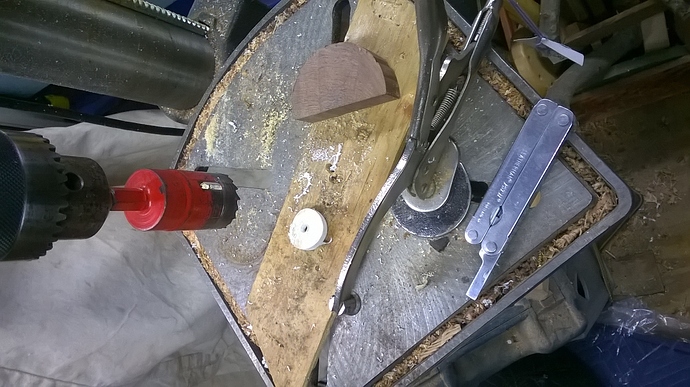 Yeah, the picture’s sideways, I know.

In both these cases, this was on the other side of the room: 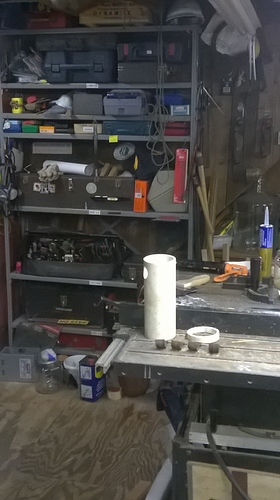 That’s about a quarter ton of “proper tools” just in that one rack! But instead of breaking my work flow to cross the room and get another tool, I just pulled out my leatherman and the job was done. Without even thinking, honestly… it goes in and out of the pocket as a reflex action.

I don’t think it was orthogonal (not to my point anyway). I was not questioning whether there were jobs that could be successfully performed with Leathermans (there are), but just saying that so much of the tool-requiring work I see occurs in places where there are tools (Leathermen or not). My point really was around the need to CARRY multi-tools when out and about, “just-in-case”. I virtually never wish I had one with me. I have a few of them at home and will pick them up out of handy drawers for certain unplanned minor jobs if I couldn’t be bothered going to my workshop. I sometimes/usually regret my laziness and wish I’d bothered to get the right tool in the first place.

A big change for me when working around the house, was when I bought a proper tool belt. I can now assemble and carry everything everything I need. It has dramatically improved my productivity.

But I never wear a Leatherman, low-slung on my hip, ready for instant action when out and about. Those that do need them so frequently so as to always carry them, lead very different lives to me.

That’s about a quarter ton of “proper tools” just in that one rack!

Yeah, but you’re not replacing all of them with a Leatherman.

As an aside I have that exact same Leatherman. It was the first one I ever owned. I find the lack of locking tools/blades to be really frustrating and sometime dangerous. Trying to use a screwdriver bit, or the spikey thing, under pressure is particularly fraught. I rarely choose it over a larger, later model I have that has all tools lock into place when in use.