Lindsay Graham must testify after Supreme Court declines to help him

Personally, I find the combination of “State’s rights primacy,” and “Jerrymandering is merely part of the political process” themes from the court very scary.

Funny, I can’t find the part of Article III where it says SCOTUS is supposed to run political interference for sitting Senators…

what is the over/under on how many times lindz takes the 5th?

This was exactly the correct outcome, and the outcome that most folks with experience were expecting, so I’m not sure I follow.

If your point is that it makes some kind of meaningful difference whether this happened a week ago or today, I’ll have to disagree with that. They’ll schedule Graham’s testimony, he’ll raise a ton of meritless objections that the DC will have to rule on, he’ll likely have to go back and face additional questions after those objections are ruled on, so this will be a process over months, not days.

I’d also argue that every ounce of the Big Lie is already baked into the midterms one way or the other, and you have a fundamentally mistaken understanding of the voting public if you think his testimony is going to change a single vote in Georgia or anywhere else. It would be great if he could be held accountable for his actions and was capable of being shamed, but time will tell on that.

So, after all that context, perhaps you could explain what it is you believe we disagree about this decision, if anything?

Really? What rock have you been living under? There’s a general election next week. The delay makes a big difference in what information about the Jan 6 insurrection comes out before people vote. That week was critical in understanding how wide the conspiracy runs through the Republican party.

It’s strange, though…if Graham’s testimony is going to have no impact, why has he fought it so hard? Why has the Party worked so hard to keep him out of court where he can be compelled to testify, and out of the headlines?

The objective evidence in front of us goes directly against your agenda here.

I’ve been entirely consistent that, just like almost all meritless appeals, it should have been denied hearing. The unanimous decision accentuates that point. And despite your handwaving, the week delay has a significant impact on what information is available to voters prior to the election.

The delay makes a big difference in what information about the Jan 6 insurrection comes out before people vote.

As has been pointed out before, the routine mechanism of the stay was used for very abnormal political purposes in this particular case. The SCOTUS probably rejects countless cases that are as obviously meritless as this one was off its docket before a stay is even issued.

None-the-less, the most politicised Justice on that bench – one whose wife is implicated in the insurrection, one who should have recused himself – chose to allow a delay just long enough to save Graham some embarrassment and also allowed Sen. Freeloader to keep campaigning as if the summons to Georgia over J6 wasn’t even an issue. In that larger context that is not business as usual, even if the mechanism used was.

When someone gets stabbed with a steak knife, my first impulse isn’t to shrug and say “the knife cut flesh as it was designed to do. Everything’s working as normal, what’s the big deal?”

I’d also argue that every ounce of the Big Lie is already baked into the midterms one way or the other, and you have a fundamentally mistaken understanding of the voting public if you think his testimony is going to change a single vote in Georgia or anywhere else

I guess the Dems shouldn’t bother trying to GOTV in South Carolina either, then (that’s where Graham is running for re-election). To paraphrase another defeatist here, his win is inevitable, we’re doomed.

The delay makes a big difference in what information about the Jan 6 insurrection comes out before people vote. That week was critical in understanding how wide the conspiracy runs through the Republican party.

First of all, if you think that his inevitable objections would be ruled on and his testimony taken in full by the midterms if not for the temporary stay, then you have an uninformed understanding of how this process works.

Second, if you think that his testimony, whatever it ends up being in the coming weeks and months, will sway a single solitary vote, then I think you have a fundamentally mistaken understanding of our current electorate.

Apparently, you don’t know what a grand jury subpeona means, so there’s really no point discussing it further.

I heard sometimes tautologies are tautological

It’s all very reminiscent of the time sitting Senators and Congressman became paid propagandists for the Nazi Party, and then tried to hide behind Congressional immunity when called to account. 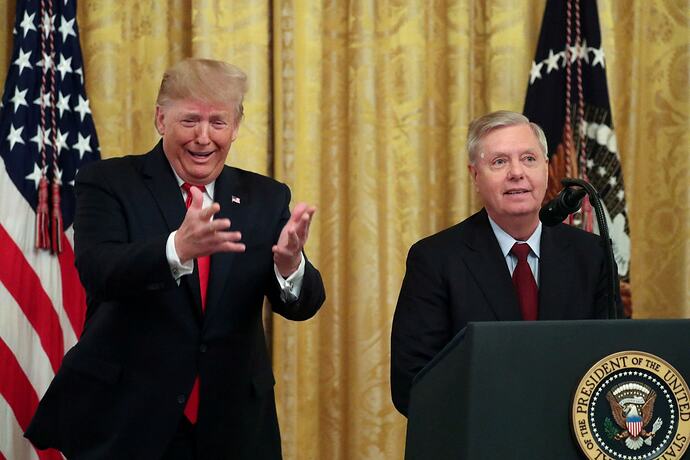 Justice Clarence Thomas put a temporary hold on an order that Sen. Lindsey O. Graham appear before a Georgia grand jury investigating possible attempts by President Donald Trump and his allies to disrupt the 2020 election.

The October 24, 2022 article from the post says the grand jury wasn’t going to be active until after the election anyway.

Willis said in a previous interview with The Washington Post that the grand jury will not be active until after the midterm elections on Nov. 8. A subpoena for Graham’s testimony orders him to appear on Nov. 17.

The stay from 10/24 to 11/2 doesn’t appear to impact the schedule at all. Had it been for longer, that could have changed.

Presumably, that none of the justices felt compelled to write a dissent with some crazy theory about why he shouldn’t testify is a good thing.

Weird, because I had read that he was scheduled to testify before the end of October until the stay put it off indefinitely. Maybe that was the appeals process overall that delayed it?

Looks like the GOP go-between neglected to deliver explicit instructions to SCOTUS conservatives.