Looks like we're not getting a Star Trek 4 after all

Originally published at: Looks like we're not getting a Star Trek 4 after all | Boing Boing

To be fair, @dnealy - we do already have a star trek 4, and it’s one of the best Star Trek movies of all time… it’s got time travel, a whale, Spock swimming with said whale, a punk on a bus, an engineer from the future not understanding how computers of the 1980s work (damn it - he’s an engineer, not a historian!)…

Plus, it’s got a strong environmental message! One of the better Trek films, for sure!

the franchise was steadily running out of impulse power

I’ve seen that movie more than any other Star Trek film and it’s probably my personal favorite. It was the only one I had on vhs as a kid (thanks free HBO weekends). 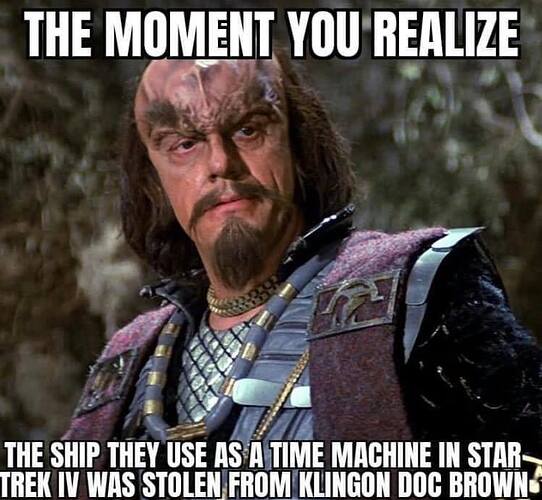 I’ve pretty much had it with Abrams’ “Kelvin” timeline anyway. For one thing, none of the villains’ motivations make any goddamn sense.

Nero had a chance to save his entire civilization from disaster and instead chose to engage in genocide just to get petty revenge against the one guy who put his ass on the line in an attempt to protect Romulus.

Into Darkness was basically “hey, what if we did a remake of Wrath of Khan but took out the part where Khan has a reason to hate Kirk?”

Beyond was predicated on the existence of a Starfleet crew who wanted to destroy the Federation for no discernible reason at all.

For me, it’s either that, or the undiscovered country, just cause I love Klingons shouting Shakespeare…

I’ve pretty much had it with Abrams’ “Kelvin” timeline anyway.

I’ve pretty much had it with Abrams.

For sure, but that doesn’t mean you can’t give the villains believable motivations. I mean in Star Trek III: the Search for Spock Captain Kirk killed the Klingon Captain’s dog. That’s some John Wick shit right there.

but that doesn’t mean you can’t give the villains believable motivations.

Sure, but I think he cared more about lens flares and space lasers…

I was wracking my brain trying to remember if it was a canine type creature or a targ, but it was indeed a dog type thing, and not a targ!

I dunno, he does “action” well, but Star Trek has action, it isn’t just action though, which is why his reboot movies don’t work so great, and continue to get “not greater” (I mean Star Trek had a bunch of “doesn’t make you think” episodes, so a movie reboot can get away with it, but if it stick to the “just don’t think about it and it is fun!” formula for multiple movies in a row, well it just isn’t working out…)

Yes, unfortunately it was pretty much at the cost of the actual Trekkies. Which sort of make business sense as there are many more non-Trekkies then Trekkies, but at the same time it doesn’t really make business sense as the non-Trekkies will go see whatever is out there, they don’t care about your particular 50+ year franchise. Alienate your core audience and eventually all you have is a hollowed out brand that once meant something and now just doesn’t get butts into seats.

I can’t say I’m surprised though, lots of businesses seem to be making the “lets trade in our brand’s good will for some short term profit!” choice.

Nope, he seems to want to make a Star Warsy Star Trek which isn’t a terriable flavor, it also is very very very far from Star Trek at it’s best, or even at it’s mediocre. I think it beats Turnabout Intruder though. I would say JJ should stick to Star Wars, but, um, that isn’t the best Star Wars movie either.

…so maybe I’m going to revisit that top quite again…

You know, I think you are right.

Nope, he seems to want to make a Star Warsy Star Trek which isn’t a terriable flavor, it also is very very very far from Star Trek at it’s best, or even at it’s mediocre.

I dunno, he does “action” well

I don’t think he does. As I’ve said before: he can lay the pieces out on the board, but he hasn’t got a clue how to play a game. That’s it. All setup, no idea what to do when everything’s in motion. His work is relentlessly boring.

You know, I think you are right.

I’m delighted you agree! Now if only I can persuade everybody else a blight on culture will be cured!

ETA
I enjoy quite a lot of Star Trek btw. Not all by a long shot, but a fair bit.

Leaving character development out, while wasting time on the water slide park in Enterprise engineering for no reason other than a cheap transporter gag predicament.

I realized it right now.

I liked the cast, but didn’t find the films compelling or memorable. I think I saw all three, but I couldn’t tell you anything about their plots.

And the character development the movies did have was… out of character.

Take Spock. He’s a character who is more or less defined by his ability to keep a cool head and a logical mind. But in J.J. Abrams’ movies all it takes is one comment about his momma to turn him into Bruce Freaking Banner: he completely loses his shit to deliver someone a savage beat-down on at least three separate occasions.

Vulcan rage is hinted at all through the Star Trek universe long before the Kelvinverse movies, and lets be fair… it wasn’t JUST his mother. It was his home planet and most everyone he knew. Even the most staid and composed person would have a problem emotionally coping with that.

I mostly hated the rebooted Kelvin timeline, so no great loss as far as I’m concerned. About the only parts I loved were Karl Urban’s Doctor McCoy, which was spot on without attempting to be exact; Simon Peg not even really attempting to be Scotty but being Simon Peg in space; and Zoe Saldana as Uhura and just being awesome the whole time (can’t remember if she sang, though, which I always loved about Uhura).

And we have plenty series now. What, like… 3 live action, 2 animated? Not including the Orville which is a tribute show? There’s plenty of Trek to go around these days without tent pole movies which are unrelated to the timeline of all the series.

And the whole, very 1990s idealistic idea that the Klingons and the Federation could get along, which was an obvious metaphor for the ending of the Cold War at the time.

Life will go on.