I had enough grapes this year to make an attempt at using my wine press. My grapes are a hodgepodge of all types so I dont know what you’d call this blend. Probably wouldnt call it “good” anyway! 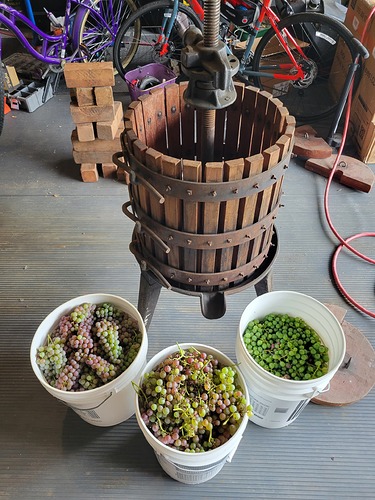 About 18 loose gallons of grapes yielding about four gallons of juice. I have no idea if that’s a good conversion. If it isn’t I “must” have made a mistake 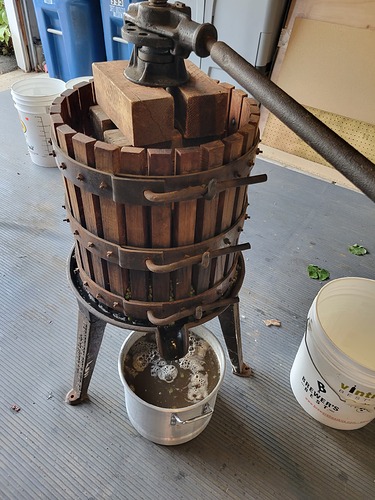 If it isn’t I “must” have made a mistake

heehee! i see what you did there!
long time ago, my stepfather and i drove over to eastern washington (from seattle) to purchase a couple hundred pounds of wine grapes (pinot noir? i think). he borrowed a press like that from the wine club he was in. we crushed 'em up and left it to do the first stage ferment on the skins, for a deeper red.
anyway, we botched it and had many bottles of really bad wine that years of aging did not mellow at all!
may your blend be a fortunate vintage!

I eventuly got six gallons of juice with an OG of 1.062, which would be a really weak wine but in the range for a decent beer, so I’ve decided I’m going to make a grape beer.

I have some belgian yeast and czech saaz hops. The juice is pretty tart so hopefully the final result will come out tasting like a lambic.

I’m boiling it now to kill off anything that might be in there. With the tartness I wont have to add any bittering hops, so the saaz for flavor and aroma should be nice.

TIL that Pine-Sol makes a great carb cleaner. 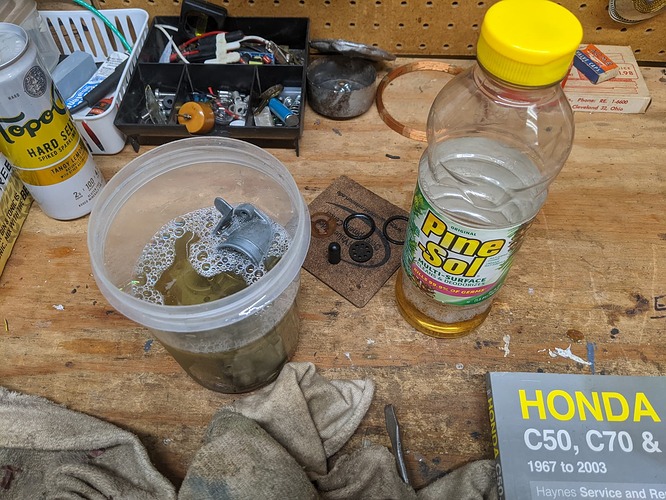 Any chance the crushed remains of those grapes end up as grappa?

we botched it and had many bottles of really bad wine

We had a year like that with our dandelion wine. We called it our punishment wine. Every time we opened a bottle we would joke, “you deserve this! You know what you did!”
Ah, good times.

yikes! dandelion wine!
the mum tried to make that once.
i think we used it as paint remover.

We’ve had some really nice batches. That year we thought we knew better and got lazy and said, “do we really need to do all this wracking?”
(Narrator: you do.)

One of the tasting notes I recall was, “shrinks the tongue.”

My “grape beer” is bubbling away merrily. It isn’t terribly frothy in the fermenter but there isn’t any protein in the juice that would allow for head retention so not that surprising. Come to think of it this is gluten free!

Smells good so far. I think this may end up being a refreshing, end of summer drink. We’ll see.

Favorite oddball wines we’ve made are: beet, carob, elderberry california coffee berry port and a not completely awful apricot w/ candy cap mushroom dessert wine. I probably wouldn’t make that last one again, but it was ‘interesting’.
All of the above use frozen grape juice concentrate and or raisins to round out the body.
Never have tried dandelion though. Maybe someday…

Do you sterilize your coffee grounds before adding to the mushroom buckets?

No. Figure making coffee pasteurized them pretty well. I can’t overemphasize, the way i do this would probably be a disaster with anything less aggressive than oysters. The need for prep work is much less demanding because of that.

A railing from the kitchen to the patio. It’s only two steps, but mom frequently has a teapot or coffee grounds in one hand, and there’s not really anything else to hang on to.

The big box stores only have fancy interior railings at $omg/ft, so a sanded bit of patio ceder and linseed oil did the job. Drilling into brick without a hammer drill is slow and tedious work. 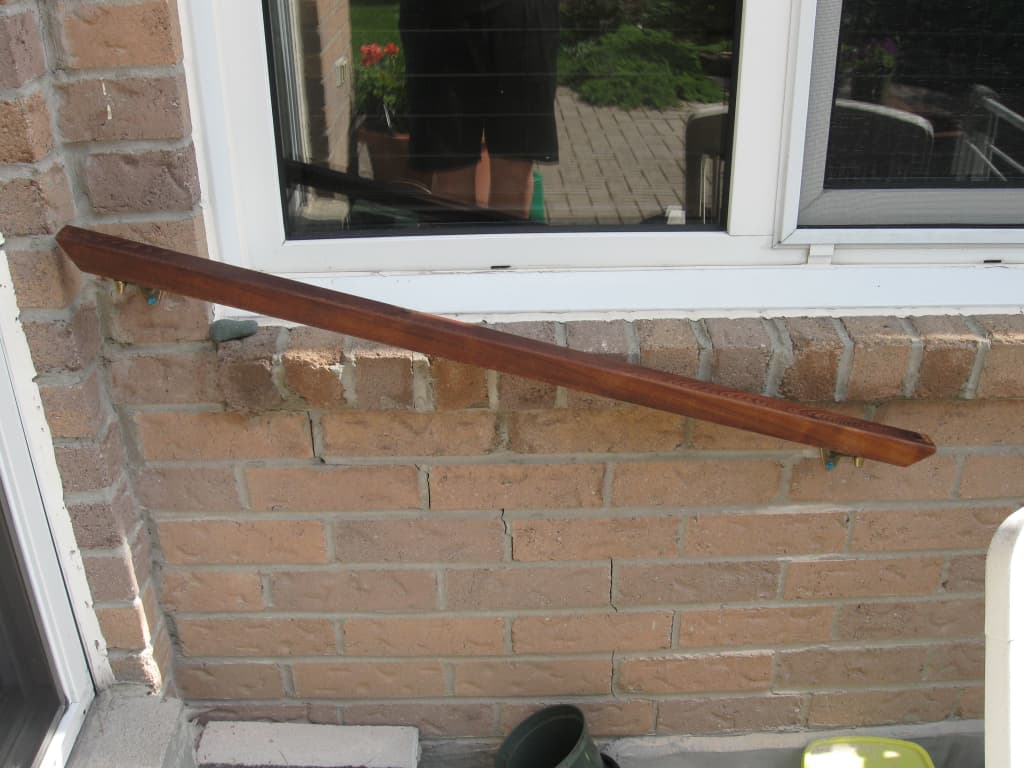 Hm. Maybe I should caulk that crack?

Maybe I should caulk that crack?

The Ms. and I spent our anniversary getting super baked, listening to dancehall, and making mandalas on the Cricut machine. 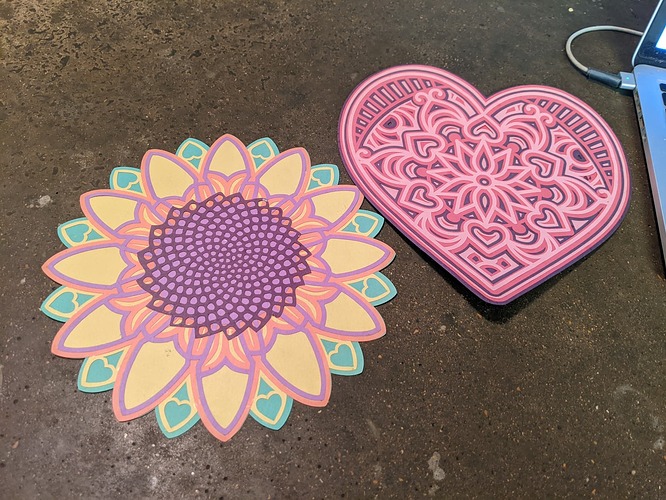 The last one is getting watercolors: 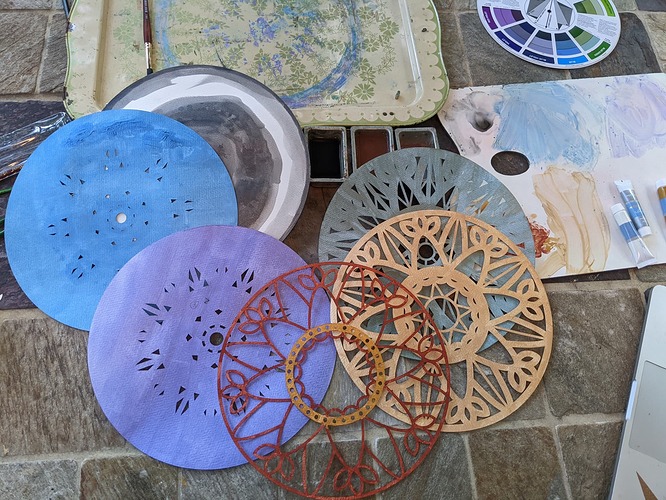 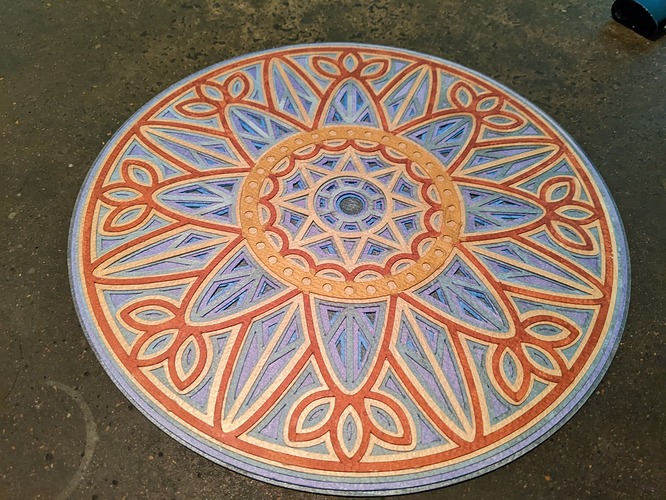 It’s that time of year again: dock repairs. Dismantling the old one and saving the tanks, deck planks, and large hardware for a new dock in the spring. It’ll be like the ship of Theseus. 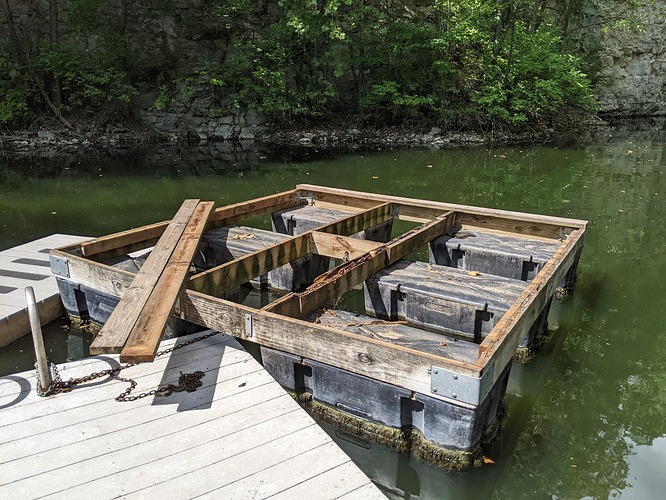 Oooh, a Honda C50/70/90! Here in Australia postal delivery folks ride those. They’re generically referred to as “postie bikes”. They are legit indestructible. I rented one in Thailand to get around Sukhothai, the original capital city, and it was a joy to ride.

Landscaping for the family astronomy patch. Those are the kids’ scopes, under weatherproof insulated bags. They’ll stay outdoors 24/7 so the kids don’t need a grown-up to carry and set up their scopes. My scope will join them soon. Mine has a ground-level base that would make an excellent rodent home, so there are a few rodent-proofing steps needed first (a cage like a rabbit hutch to surround the scope, to be wheeled off when scope is in use).

Gravel for drainage, so that rising dew doesn’t settle all over the optics. The fence looks terrible for views near the horizon, and it kinda is. But from the eyepiece height, the fence top is in line with the neighbour’s treetops, so that’s as good as it gets.

My 8-year-old daughter just did her first observing of Jupiter and Saturn with her scope. “Why does Jupiter look all rainbow-y?” When I explained, she had to step back in wonder. “I’m looking at clouds on Jupiter through my telescope?!?!” Followed by a happy dance. Awesome fun. 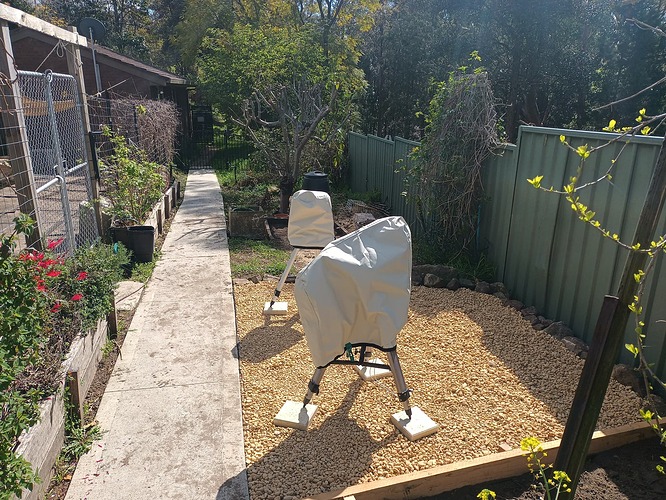