There have been conversations on university campuses in open carry states about how to deal with people carrying guns. Many faculty would love to ban them from classrooms, but some laws explicitly forbid that. This Walmart response suggests an interesting alternative: just report everyone you see with a gun as a possible active shooter.

As a former resident of Springfield, MO, all I have to say is “Thank goodness I left.”

Open carrying is a implicit threat to the public.

You have to question whether someone who chooses to do so is mature enough to own a firearm. Obviously doesn’t apply when hunting etc.

It seems to me that this is the only rational course of action. (Of course I’m a UK observer, and my view is not the same as a US citizen.) I can’t help feeling that this should have been the immediate reaction when the “open-carry” acheived its notoreity. My guess is that people could not guarantee the reaction of police force. Which is fair enough. Now that the police are taking their duties seriously (at least, some of them) I hope to hear more of this sort of thing.

Startung in 1966 the Black Panthers started carrying rifles, though not automatic weapons. Huey tead the law books, and it was a challenge, something legal but likely to get stomped when black people carried guns. And since it bought into a violent part of the world, it was a major cause of the Panthers eventual collapse, and probably did attract people interested in power coming from firing guns.

Fifty years later, white right wing types have followed the Panthers lead, though I doubt they give the Panthers credit. I really don’t see a difference, exceot the Panthers didn’t carry automatic weapons or flak jackets, and were pursued almost from day one when they first appeared in publuc with weapons.

Yes, it’s weird to see people with guns strapped acrosd their backs, though maybe not in Israel. And it’s scary. But if one is legit, why is the other not? And yet I don’t think it’s a good thing.

He’s very white to be alive.

If there are no laws to slap this asshole, then Walmart (and other places) have a big problem.

just report everyone you see with a gun as a possible active shooter.

It’s funny and apt, but calling the cops in the anticipation of triggering armed confrontation is très problématique. “Now maybe they’ll kill whites too!” is the thinnest gruel.

The hope would be that the fallout would effectively convince people not to carry (or convince the public to change the law or at least allow a university exception) before anyone gets killed.

You can bet that any law that relies upon an officer’s discretion will be eventually used primarily against minorities. Reagan’s gun control is an excellent example. Here’s the problem though. We have a weapons proliferation problem in the US. There are 1.2 firearms for every individual in this country. That is not a recipe for a civil society. I don’t know how to remove 2/3 of all firearms without causing an armed uprising from the gun nuts. I also am not aware of anyone pushing for regulations that would reduce the arms proliferation problem we have in the US. Add on top of it all the “originalists” that fabricate in an individual right to the 2nd amendment when the entire idea didn’t exist two decades ago much less two centuries ago.

I have no problem with this.

If you live in an open-carry state, you made your bed now lie in it. Freaks you out? Call your politicians and get them to change the laws (which is what I’d be doing if I didn’t live in lib-lib MA). Or better yet, vote the mouth-breathing knuckle-draggers out of office.

It must be hard to be that scared all the time. I feel sorry for people who feel the need to carry an assault rifle to Starbucks or Walmart.

Why don’t we call this activity by its real name? This is white male privilege in a nutshell.

We all know the answer. This is the flailing response of white males to their perceived loss of power. It’s pathetic. 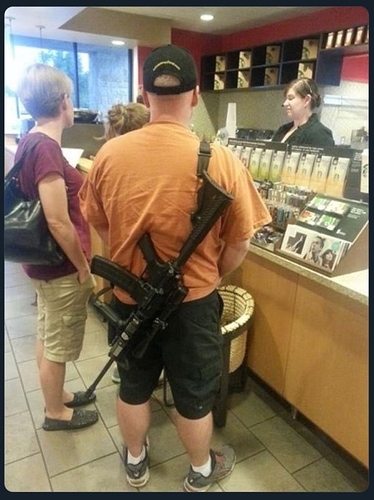 this is just madness. pure, utterly madness. plain and simple. I see this and my head spins in disbelieve. I kinda can handle this in my mind only because it feels not real but like an online-game, as if were the largest “democracy” on the planet just some extra-insane level in duke nukem or whatever.

The answer if you’re not “white” is damn sure “leave,” 'cause if The Man shows up they’s gonna shoot you first 'stead of the “good man with a gun.”

If there is a real shooter with some brain he will start by shooting anyone armed. So that guy would be dead before he got his gun off his back, bying the rest of the people in the store a few seconds to duck or run. Unfortunately, the shooter would also have another gun and more ammo once he looted the corpse.

hell of a drug

mission accomplished. there you are, land of the free.

Are black and brown people flaunting guns in public?

Only if they have a death wish.

Startung in 1966 the Black Panthers started carrying rifles, though not automatic weapons. Huey tead the law books, and it was a challenge, something legal but likely to get stomped when black people carried guns. And since it bought into a violent part of the world, it was a major cause of the Panthers eventual collapse, and probably did attract people interested in power coming from firing guns.

Fifty years later, white right wing types have followed the Panthers lead, though I doubt they give the Panthers credit. I really don’t see a difference

seriously? you do know why the black panthers started carrying weapons openly, right? the above clip from “columbine” may give you a hint.