Yes I wondered if the insurance company can say that it was an ‘act of god’, maybe like that crane in Mecca

Mythbusters did that one. Their verdict: if you dropped a sheet of plate glass from that height you could really shear someone in half, but if you dropped the kind of tempered glass they actually use in high-rise buildings it would crush them (and shatter of course).

The Cell, a 2000 psychological thriller that largely takes place inside the mind of a serial killer. It got pretty tepid reviews overall but was still a visually stunning film IMHO. I have a hunch it was one of the influences for the TV adaptation of Hannibal.

How do people walk that slowly?

I thought I’d seen that film and liked it. But I don’t remember that…

I couldn’t find the link but I see your Google-fu is greater than my own.

Mythbusters recently tested this exact thing. And the tempered glass did exactly this. Hit their dummy , bounced off and shattered into gravel without cutting anyone. Which is exactly what tempered glass is meant to do. To get anything like a “guillotine” effect they had to use plate glass and deliberately break it to create a sharp edge. They also had to do their dropping on guide wires because there was some aerodynamic effect causing the free falling panes to pancake or wander off target.

A better headline would be “man gets hit by safety glass in freak occurance, safety glass performs as advertised.”

I used to work for a software company in the San Francisco bay area that had at least three incidents of windows popping out on windy days due to failure of the sealants that hold them in place. I can imagine this must happen all the time in say Dubai.

At the end of the video as he enters the shop, it looks to me like he has a palm-sized blood stain on his kaffiyeh from a scalp wound. I think the glass glanced off his head, and the guy is possibly concussed.

Check out the curved reflection on the pane, is it warped? Maybe by air resistance as it falls, maybe it’s oscillating due to whatever caused it to fall, potentially having been nudged or knocked. 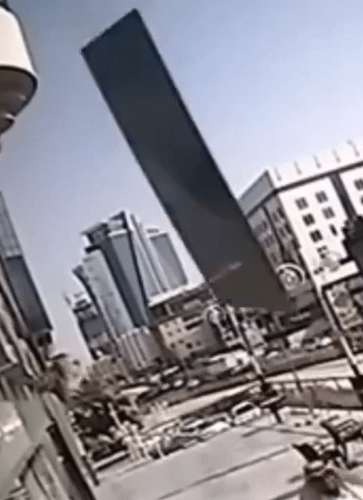 Regardé the position of his left arm, his shoulder is still slightly rolled forward (even though it’s rolling back as he starts to roll his right shoulder forward).

Also, in this frame you kinda get the impression the band keeping his headwear on got clipped (see later frame) and (perhaps taking advantage of the slight warping of the pane as it falls) is deflected. I believe the material under the the headband draped between his head and over his shoulder would have been pulled taught and also contributed to the displacement of the pane, protecting his shoulder (to a very small extent but just enough!). 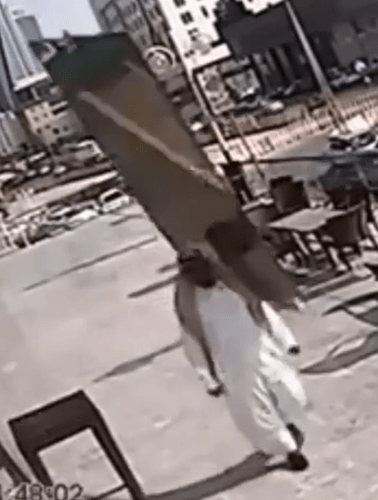 Now it’s really warped, and potentially also fracturing, which would be obscured by his shoulder and head. 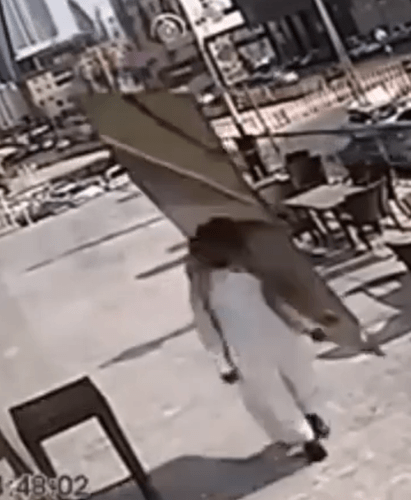 Shattering and falling around his body. Probably mostly caused by the impact pressure of the flat area of the pane on his shoulder and head. 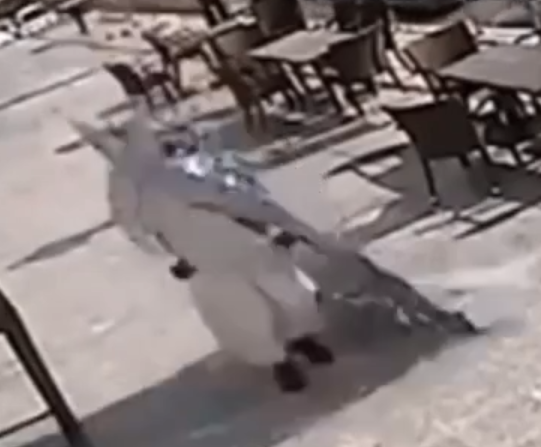 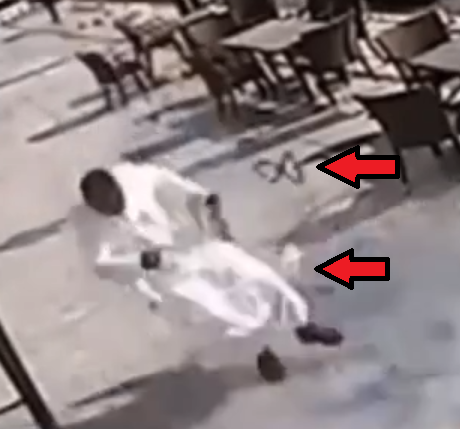 Dragged off his head like the very edge of it was clipped by the leading edge of the pane. He is pushed to his right, the band and headwear are dragged to his left.

I think the infinity symbol it makes is an artefact of the video capture, although it could be two loops of the same material joined at one point.

Or he could just be infinitely lucky.

Always check your shoe if you need to folks. 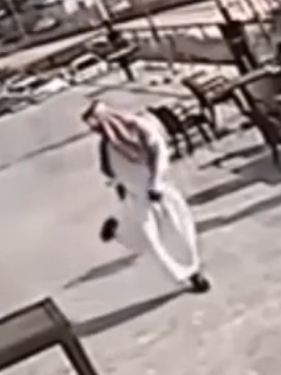 How do people walk that slowly?

Nowhere in particular to be, just taking it easy and enjoying the air and light.

And the tempered glass did exactly this. Hit their dummy , bounced off and shattered into gravel without cutting anyone.

Well, their dummy was given lethal injuries, just not sliced in twain!

Man, Lucifer’s off his game…bet that guy was on his way to kill the Antichrist…

How very scientific. I like it. You must be related to Richard Dawkins.

Weren’t the lethal injuries on the plate glass? I haven’t seen it since it aired, and frankly I could be mis-remembering.

How very scientific. I like it. You must be related to Richard Dawkins.

That seems a little uncalled for. I’m not arguing for the eradication of all Muslims. Just pointing out this is exactly what you’d expect to happen should a sheet of tempered glass actually manage to hit a human being in this fashion. Its vanishingly rare that it would actually strike the guy, and its almost impossible for that kind of glass to slice anyone in two.

I think the infinity symbol it makes is an artefact of the video capture, although it could be two loops of the same material joined at one point.

I think it’s just how it fell. My aunt worked for the state department, and was stationed in Abu Dhabi for a couple years back in the mid 1980s. While there, she sent me a gift of one of those same kinds of headwear thingies (though I can’t remember what they’re called), and the cord that fastens it 'round your head was that same kind of double loop that would essentially be twice the circumference of your noggin if it weren’t wrapped twice. I still have it somewhere.

would actually strike the guy, and its almost impossible for that kind of glass to slice anyone in two

Yeah, so says Dawkins. I bet this IS Richard Dawkins on a fake account. I see right through your charade, mister.

Weren’t the lethal injuries on the plate glass? I haven’t seen it since it aired, and frankly I could be mis-remembering.

Yeah but the myth wasn’t about lethality. It was about being sliced in two by a falling pane of glass…

Oh I get what you’re on about. No they didn’t get anything like bifurcation. And I don’t think they even would have gotten the deep cut they did if there were any bones involved.

It’s interesting, too (I think), how the guys getting in and out of the building open a very tall glass door, but then have to duck to get inside. This whole construction project raises a few flags…