I’m a bit surprised that MTG has managed to pull together some semblance of discipline. She’s still an unhinged wingnut, but being able to make friends of the party establishment is definitely a surprise.

Reminder, though, that Pence auditioned for the role via his position as Governor of Indiana, pulling all sorts of base-chumming. He was never the ‘staid and boring’ member that people pegged him as. He was always willing to say ridiculous things in the right venues, he just knew that sometimes you read the crowd and keep to the niceties. The distance between him and MTG with some media training is really not as great as I’d like it to be.

A job famously said to have all the appeal of a warm pitcher of urine is “her goal.” That tracks.

“Dumb and dumber” can be their campaign slogan.

She’s both idiotic and unhinged.

… and McCarthy caved in to her.

–really relishing the “head for backstage pass” angle of this all, ngl

Her price was pretty low, to be fair. A committee or two. The rest of the ragged rebellion held out for shit loads more, and he caved on all of it. So, she’s not only now a sell-out, but she’s a cheap sell-out.

These aren’t puny committees: She got Homeland Security (so expect bodies piling up at the border) and Oversight and Accountability (which she’ll use to tie up gov with useless vengeful probes and investigations).

Bottom Line: They gave her weapons.

UPDATE: MTG has also been placed on the Corona Virus Committee.

…and AOC has more federal governent experiences than either of those two.

NBC is a bit late to the party: 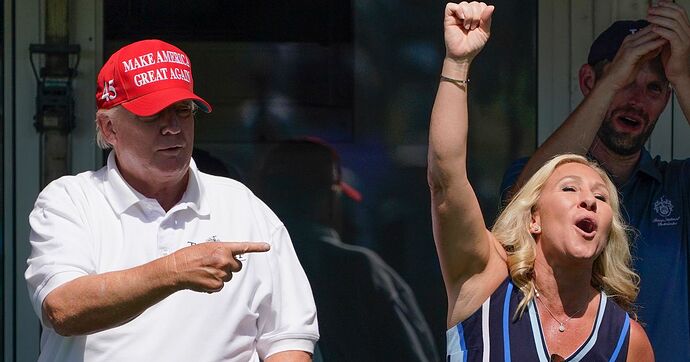 Marjorie Taylor Greene Tells Reporter She Is In Talks With Trump To Be...

This is no big surprise, since it is owned by Comcast…
It is also no big surprise that Empty G would want to be Lord Dampnut’s VP.
They have so much in common & she would be a far better attack dog than Pence ever was.

I don’t think he would survive a term with Empty G at his side, though; I think a jealous Melania would do him in.
Hell, if she catches them in flagrante delicto, we might get a twofer.

“What Greene possesses that Trump so craves is loyalty,”

For certain values of “loyalty.” 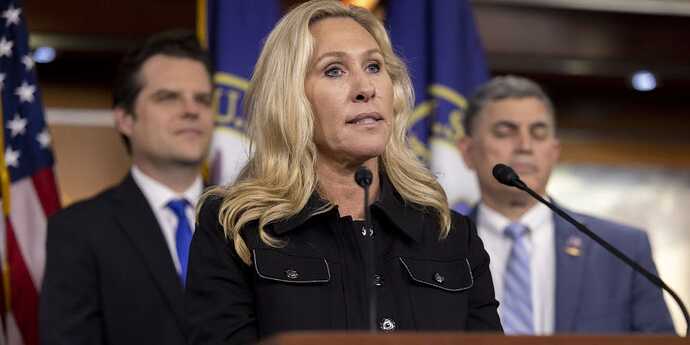 Perry Greene and the congresswoman "mutually" requested that the court grant a divorce as their marriage is "irretrievably broken," per court filings.

Also, if this is true…

Also, there is always hope for a short term.

List of presidents of the United States who died in office

Since the office was established in 1789, 45 persons have served as president of the United States.[a] Of these, eight have died in office: four were assassinated, and four died of natural causes. In each of these instances, the vice president has succeeded to the presidency. This practice is presently governed by Section One of the Twenty-fifth Amendment to the United States Constitution, ratified in 1967, which declares that, "the Vice President shall become President" if the president is ...

think a jealous Melania would do him in.
Hell, if she catches them in flagrante delicto

Trump’s delicto ran out of flagrante a while ago

and while I’m sure Melania would jump at any excuse to divorce him without breaking their prenup, I wouldn’t call her motivation “jealousy”

OMG YES
Please please do this it will be a disaster

it will be a disaster

Please please do this it will be a disaster

That’s what people said when Trump ran in 2016. It was certainly a disaster, but for the entire country rather than just for the GOP.

Hoping the Republicans will pick terrible candidates because that will theoretically make it easier for Democrats to win is not a good idea. Even when the MAGA freaks lose the act of putting them behind a podium in the first place shifts the Overton window toward batshit fascism.

I think they’re preparing to back Pete which is going to be… lackluster.

The two most batshit insane members of the GQP and the Trump Cult seem like the perfect match, but I thought for sure that Donald was going to pick George Santos. George Santos said that he would. But the GQP know that Trump is a millstone, and they’re going to go with the Hyper-Trump DeSantis instead. The great thing is that there are a LOT of people who will only ever vote for Trump, even if he’s not on the ballot. I hope this burns the Republican Party to the ground.

MTG has also been placed on the Corona Virus Committee.

UPDATE: MTG has also been placed on the Corona Virus Committee.