Electric cars, bicycles, the ladies’ room, they’re all considered effeminate, and therefore coded ways of implying that somebody is…a homosexual. And all that loses much of its power when somebody is openly gay. Implied homosexuality is their go to insult, and they really don’t know what to do when people aren’t insulted by it.

It feels like a naked claim of virility and sexual potency is behind much of the conservative messaging. It is weird to me to see these “Christians,” worship a the altar of the “big swinging dick Jesus,” despite Christianity’s traditional prudishness.

But do I feel safe sharing a restroom with her? Does anyone?

Trump predicted 20,000 to 30,000 at this rally. Best estimate says 5,000 would be being very generous. Of course, he claimed there were people “as far as the eye can see”, but, we of course know that he has terrible eyesight. One distinct reason for the plummeting numbers at his rallies is that his cult members are dropping like flies. Hydroxychloroquine and Ivermectin DO NOT WORK, and not getting vaccinated because of Trump’s paranoid fantasies works even worse.

It’s frightening that it only takes a handful of idiots (Trump, MTG, Gaetz, Boebert, etc) to whip millions of gullible people into a bloodthirsty frenzy.

Or you could say it takes millions of bloodthirsty idiots to elevate people like Trump, MTG, Boebert and Gaetz into power. Which is really an even more terrifying prospect as it means the source of the problem will remain after those figures are all gone.

Does she think gay men are. . . preying on women?

She doesn’t “think” anything. She’s just merging modern transphobic nonsense back into the old-school homophobic nonsense about gay people being child predators. (Although less “merging” and more “making the origins clear,” I suppose.) That it doesn’t make a lick of sense doesn’t matter.

It is weird to me to see these “Christians,” worship a the altar of the “big swinging dick Jesus,”

I think it’s even worse than that, as it’s a violent, “toxic masculinity” Jesus, too. It’s not just a (grotesque, fascist) need to be “manly,” what’s considered “manly” is perverse too. E.g. even with vehicles, the “manly” cars are the ones that are the most destructive, the ones that cause injury (“rolling coal”). “Who would Jesus hurt?” is their motivating question, and the problem is, in their eyes, the answer is “the people we don’t like.”

She doesn’t “think” anything.

Yes, I answered my own question.

Does she think gay men are. . . preying on women?

I think you already know that and your question was a rhetorical way to highlight just how stupid she is, but it bears repeating that the LGBTQ community and allies need to stick together or hang together. And with people like MTG in Congress that’s not hyperbole.

All in all I think most women would feel safer sharing a bathroom with Pete Buttigeig than Mad Marge. 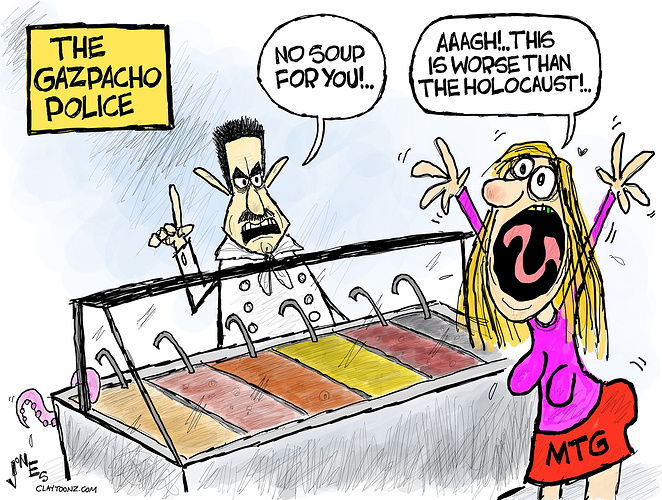 I think it’s even worse than that, as it’s a violent, “toxic masculinity” Jesus, too. It’s not just a (grotesque, fascist) need to be “manly,” what’s considered “manly” is perverse too. E.g. even with vehicles, the “manly” cars are the ones that are the most destructive, the ones that cause injury (“rolling coal”). “Who would Jesus hurt?” is their motivating question, and the problem is, in their eyes, the answer is “the people we don’t like.”

There is definitely an exaltation of violence. Don’t get me wrong sometimes violence is the least bad answer. One needs to stand up to bullies, or they just get worse. But not every situation justifies or is improved by violence. Most aren’t. But they seem to glory in violence, the threat of violence, as if it in and of itself ennobles the cause it is used in. “I don’t want to wear a mask, and my willingness to punch somebody in the face about it, means that is a holy fight for freedom.”

“a good father kills his wife, castrates his sons, and rapes his daughters and when nothing but death exists around him he finally can kill that weak bleeding christ and usurp God to be the master of the world.”

To me, that seems to be the gist of the new “christian nationalist” faith. And I see precious few Christians standing up against it to protect the values they love to talk about, which makes me more than a little disgusted with the lot of them. To me if your religion doesn’t give you the morality to turn away from evil that readily apparent, both your religion and your morality are lacking.

I suppose in an ironic way that means I had more faith in other people’s sincerity than I thought I did, which is sad.

Probably something along the lines of “it’s because they stopped Joseph McCarthy that we 're dealing with so many communist libruls and had (not going to say it) president Obummer!”

Those who don’t learn from history something something…

Why go through the complications of being trans just do something cis-het guys do everyday? Girls are attacked in the bathrooms at school fairly often and none of those guys was claiming to be trans (that I’ve heard of)

She serves a purpose. Fascists need an available army of disaffected, frustrated, confused, aggravated people who can been convinced that they as a group have been victimized.
January 6th was a preview of their objective, and perhaps a preliminary test to gauge how effective they have been. Greene, Boebert, Palin and many others are among the lawmakers and “conservative” “news” celebrities tasked with and paid to maintain the continuous level of agitation required. The scriptwriters and their financial backers are the ones who truly need to be silenced.

This line of thinking is so common amongst transphobes. According to them, predatory men transition to be able to attack women in bathrooms or jails, or to win at sport or whatever imaginary scenario the 'phobes can come up with… Like hell they do.

Transition is hard, exposes you to discrimination and abuse, causes physical and mental changes that if you’re cis will mess you right the heck up. I should know, I lived with dysphoria for decades. Why do that when you can just walk into the bathroom or cheat or whatever? It makes no sense if you stop to think for a minute, but they’re so blinded by hate they never actually do stop to think.

I’d go with ball peen hammers. Claw hammers are sharp if you look at them from the right angle and she’s dull the whole way ‘round.

they’re all considered effeminate, and therefore coded ways of implying that somebody is… a homosexual. 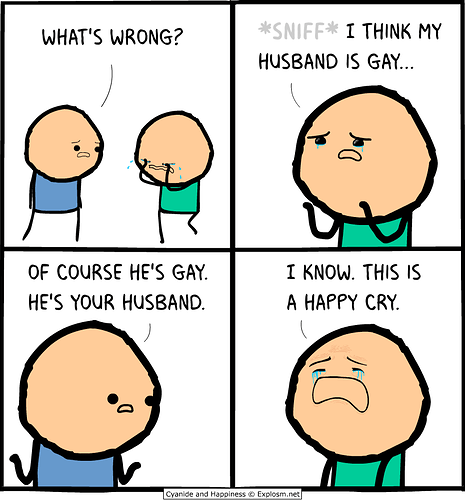 I think transferring a real fear women face (getting raped in or around a bathroom or at least perved on there) from the real aggressor (straight men who assault and harass women) onto a scapegoat who they want to see harmed (trans women) is the how and why.

Using one group’s oppressive fear to do harm to a less powerful group is what fascism is all about, right?

In this way men who rape women are the friends and allies of women like MTG, helping keep women under control and in fear, all while getting to pretend they are protecting women by scapegoating a targeted minority.