MEAT (redux), or, HOW I LEARNED TO STOP WORRYING AND EMBRACE MEAT, MEATLESS DISHES, AND VINTAGE COOKBOOKS

Yeah, it was a present, the things people buy you when you have a hobby…

Its ok… but I like the actual books/booklets themselves.

i have a copy of this, a breezy blend of historical information nd useful recipes– 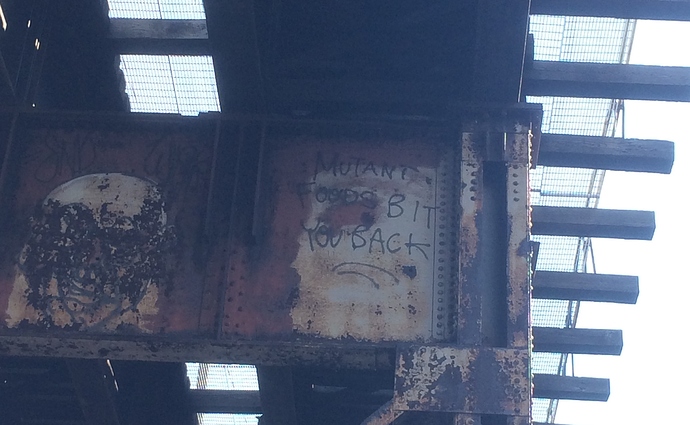 ######This is a bit of old graffiti around me neighborhood, I’ve been looking for an excuse to share.

The topic was closed after 24 hours? When does that ever happen?

I have an entire bookcase in the eating area of the kitchen for my cookbooks, so it’s hard to pick one favorite.

One that I used all the time when I was young, and probably should look for again, was called With a Jug of Wine. I’d have to adapt the recipes now, but I grew up making things like boeuf bourguignon and veal scallopine. If you find that cookbook, and you cook meat, BUY IT!! 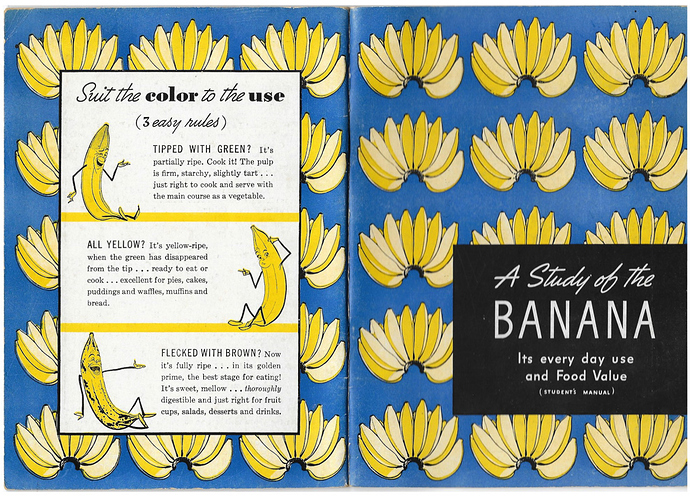 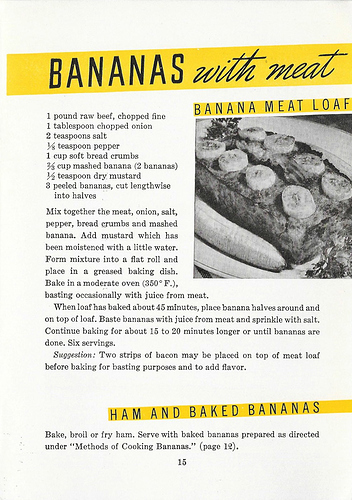 I love cookbooks so much! Such a fascinating look into history, into a people, a place, a period of time. So much going on! New ingredients! New technology! So much going on in cookbooks! Bananas were new to most Americans, they needed to know what to do with these strange new fruit! Frozen concentrated orange juice changing the face of breakfast forever! Its all so amazing!

I was reading a cookbook from the late 17th century (England) and it contained recipes for “Macaroni” and it is immediately apparent that the writer of the recipe think that “macaroni” was a bean. To prepare “macaroni” you soak it over night, boil until its soft, mash with butter and salt and serve as a side. And cookbooks from the new world with weird recipes trying to incorporate new world crops like “Indian Corn Meal”, amazing history. A history of humans is a history of food.

You beautiful nerds should write some articles. I’d read them.

I think your collection beats the pants off of mine, then gracefully apologizes but with panache and flair.

I recently found one that had went missing, but while it isn’t that old it is hard to find in the states. (Beer brewing)

One day I’m going to get off my rear and do a youtube cooking show. But not the kind that is mocking, tho those are hilarious, but actually sincere. Cuz dammit I want to know what jelly made with antlers or isinglass tastes like!

I don’t even know where you would get enough isinglass. But the stuff I’ve used is… Fragrant.

Heh, don’t we have a thread for this already…?

On a serious note, Alibaba is more set up as a business-to-business site. Their direct-to-consumers site is AliExpress. Which has isinglass available in more reasonable lots: http://www.aliexpress.com/wholesale?catId=0&initiative_id=SB_20150820075618&SearchText=isinglass

Oh I know, Aliexpress has eaten many of my productive day hours… I’m just amused that you can buy a metric ton of isinglass on Alibaba. (Tho some suppliers on Alibaba do small quantities too, and often have shops on Aliexpress too, its crazy in there!)

I only heard about AliExpress in the past month

One of the isinglass suppliers also has concentrated powdered beet juice in huge quantities–i want some!!! Think of the colors!

I’m sorry? I didn’t know you didn’t know? What else don’t you know? Maybe I can help?

@japhroaig - Alibaba/express is a black hole that I have fallen into too many times! You shall not tempt me sir!

That was one of the most enraging movies I have ever seen in my life. AND we got an hour Q&A with the director afterwards and even he was still agog with the film he’d made.

This topic was automatically closed after 555 days. New replies are no longer allowed.