Mein Führer, I can walk!

I finally hit on the idea of going as Dr. Strangelove for Halloween. I already had the 50s slim-cut suit, the glasses, the cigarette, the black leather glove. All I really needed was a blonde wig. By Gareth Branwyn

I went to work as Dr. Strangelove several years ago–when we still had office Halloween parties. The hard part was getting a wheelchair. I left my hair its natural brown and just combed it into a Sellers-coif. This year, thanks to chemotherapy, I’m completely bald, and have contemplated going out as Alexei Sayle, or more likely Richard O’Brien. That is, if I had someplace to go. Over the years the number of my coworkers who dressed up for Halloween dwindled. And everyone looked forward to whatever I’d do–I’d been a gargoyle, Rorschach, and Andorian, Harpo Marx, Seymour Krelboin (with Audrey II). One year a group decided to do The Addams Family, and a friend called me at eleven o’clock at night two days before Halloween to ask if I’d be Uncle Fester. This year I wouldn’t need the bald wig.

When no one else dressed up it felt like there was no point anymore. It was no fun playing by myself. When people asked why I wasn’t dressed up I retorted, “Why aren’t you?”

I’ve been told my hair may grow back gray and curly. If it had I definitely would have dressed up this year regardless of whether anybody else did. The chance to be Peter Capaldi as The Doctor would be too good to pass up.

I went as Harpo Marx back in college and to my surprise the women were all over me. I stayed in character the whole time.

no pics, but my Rorschach costume from a few years back came out really well. the mask–though a fixed pattern–looked great, and I had reasonably suitable choices for his clothes in my wardrobe already (kinda similar hat but grey not brown, same-ish white scarf, jacket was brown leather though not a full length trench) so it looked less costume-y and more badass.

As I arrived at the party, there was another Rorschach milling outside with some folks, wearing a half-assed mask and a new-looking, costume trench. She saw me and I wordlessly marched right up to her group. They were all super sketched-out, as if I were actually him, and about to take her to task for imitating me. I took that as a huge compliment, but of course all I was going to do was say “hey, good choice!”

some other good ones I’ve done:

Please tell me you said “I needed that like I needed a hole in the head” at least once.

All those sound fantastic. And, since I happen to have one, here’s my own Rorschach picture:

I was almost blind in the homemade mask, but it was worth it.

You can make the mask pattern changing with your breathing, using a bit of microencapsulated thermochromic pigment with threshold temperature around 30 'C. It is easy to find on eBay. (The ones with higher or lower threshold temperatures can be a royal bitch to source.)

wow, holy shit! this is kinda the same idea as those Hypercolor clothes from the 90s? that’s pretty badass.

Yes! Even the same kind of pigments. Also the same as those images that show/unshow on some kinds of coffee mugs when filled with hot liquid.

You can also have other kind of color-changing paint, but that’s more suitable for e.g. vehicles or bathroom tiles - liquid crystal pigment that changes color between red and blue within a larger range of temperatures (and is black outside of that range, assuming black background), instead of a single color-to-colorless change. Video from one of the vendors:


The stuff is expensive as a brand-name snob-end hell, so I didn’t play with it, but it looks nice.

All these things are rather sensitive to UV light, and tend to degrade over time unless coddled suitably (no UV or a good filter coating, no keeping too hot for too long time, no incompatible solvents around that would infiltrate the liquid crystal layers or damage the microcapsules).

That is some amazing stuff. It reminds me of a set of glasses my father got for his 40th birthday. Each one had a girl in a dress. Add a cold beverage and the dress would disappear. Probably not the same stuff, but a very similar principle. 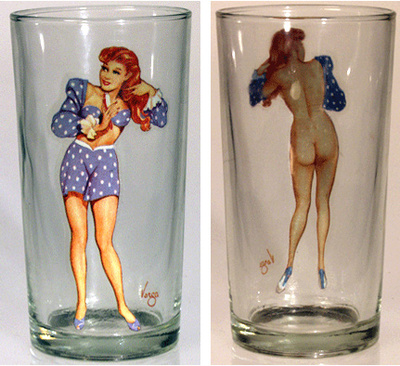 Girlie Glasses: A Peep Show With Your Beer

A beer is served in a glass with a pretty woman on the front. As you drink, something catches your eye—inside your glass you can see the bare butt cheek...

I had to look up that one, knowing that these things were too old for microencapsulated thermochroms, and these also are colored in the low-temperature form and colorless/white above the transition threshold so no vanishing-when-cold could happen.

I’ve been trying to dress Mr. Bells up as The Dude for years now. I think I’ve convinced him to do it this year, but now I realize he doesn’t have any shorts (for the grocery store scene).

I went as Tippi Hedren being attacked by birds. Sadly, the costume contest judges (at a museum with a horror movie exhibit!) didn’t seem to know who I was.

he doesn’t have any shorts (for the grocery store scene).

pretty sure he’s in shorts for every scene. I had to borrow some :^)

costume contest judges (at a museum with a horror movie exhibit!) didn’t seem to know who I was.

lame. sounds like a great costume. the birds were on wires? or they were anchored to your clothes mid-attack?

speaking of good costumes going unrecognized: that same year as Rorschach, I was at another very large party (but kind of a square scene) and I passed a couple in the throng, the male’s costume tripped my spider-sense. I stopped dead “wait… are you… Bowie from Labyrinth?” By their reactions, I could tell both that I was the only one who had guessed it, and that it was the girlfriend’s idea as she thanked me profusely. They, however, guessed I was the Invisible Man. This was the first Halloween after the Watchmen film had come out, but still a little niche, it would seem. so, I feel ya.

I’ve got my mask on a wig display here, with the hat I wore. I hand-painted the badge, too; both the face and the blood. it was just some random badge with lettering on it I had laying around.

I was almost blind in the homemade mask

ya, in the daytime I could see right through the stocking material, but I was completely blind once I got to the party. had to burn the little eye-holes in with matches.

ya, in the daytime I could see right through the stocking material, but I was completely blind once I got to the party.

Wrong fabric then. When I was playing Death (the original idea was a dark wizard but the others thought otherwise once I shown up, and they were right) at some summer camp, I used a thin black silk scarf all over my head (an improvisation over the original plan). I had a completely black cloak with a cape, and the only thing directly visible from me was a pair of bony white hands, natural style, no makeup needed. (And yes, I had a real scythe, they got one for me from whoknowswhere. I was sharpening it all the time, it was making just the right sound background to the various swordfight. Together with occasional “hurry up, I don’t have only you” and “throw a coin” style comments at the fighters.) Not exactly a Halloween timing but would work in late October too.

I still have the scythe curve in my muscle memory.

A thin black(!) fabric can work even with sunny day level of sunlight and in almost darkness; the fibers have to be dark to not scatter light, and the fabric light enough to not absorb too much light to work in darkness too. Too light-sensitive eyes help too.

Oh no, I meant my husband doesn’t own shorts. Which is a pity because he has nice legs.

Anyway, here’s my Tippi. My daughter did the wig. I’m not good at hairstyles real or fake.

If I’d been in a wheelchair for a third year, my wife and I were going to go as Vena and Captain Pike from “The Menagerie” episode of Star Trek: TOS.

Some cardboard, some wiring of Green, Red, and Yellow Yes/No/Maybe jewel lights, and some troweled-on face-spackle later, oh yeah, and a turtleneck, and I would’ve been good to go.