No one deserves abuse for reporting but honestly who cares if Ben Shapiro quits Breitbart?

It’s like they’ve just realized they work at Breitbart.

Virgin Ben will find some other horrible venue, though it is funny to see him hand-wringing over Breitbart’s moral failures, given that the Breitbart brand was built on moral failure alone.

Garnering sympathy for Breitbart [so called] News is going to be tough.

“After Breitbart reporter Michelle Fields was beaten up …”

See a classic propaganda technique in action, as the opening sentence of a piece … as if one could just wish away clear videos that show negligible contact between Ms. Fields and the Evil Henchman.

The world of conservative news, whether it’s Fox or Limbaugh or WND or Breitbart, has always been to promote an agenda, which means ignoring facts when it suits the intended goal (and a lot of their time is spent trying to find evidence that other media sources have a liberal bias, to justify their own conservative bias.) Currently the intended goal is winning the Presidency for the GOP, which means anyone not on board gets thrown overboard.

If Trump weren’t so far ahead in the polls, and winning the White House wasn’t so important to the GOP, then Breitbart would be calling Trump a RINO (other Republican’s have been called RINO over far less.)

I get a kick out of how he called Breitbart “Trump’s personal Pravda”-- when it was the GOP’s Pravda it was OK, when it’s Trump’s Pravda, that’s going too far.

Just what will it take for our media to demonstrate solidarity with workers and support for protecting their rights?

Oh yeah, that will be it.

Wait, Breitbart’s mission is to support women and fight against their oppression?

One learns something new every day.
/s

One of those two is more easily forgiven.

To smear, discredit and misrepresent to forward a radical right-wing agenda?

Sounds right on target to me.

Eager to be first in line for scraps from Trump’s imperial table, eh?

Breitbart, for one, welcomes our new classy overlord.

Currently the intended goal is winning the Presidency for the GOP, which means anyone not on board gets thrown overboard.

Yea, “beaten up” is ridiculous, but so is “minimal contact.” Grabbing her like that was highly inappropriate, but maybe it would be good to save words like “beaten up” for people who are actually beaten up, of whom there is no shortage.

Also, your video editing skills could use some work. Just saying.

I like trainwrecks that don’t hurt a single good person.

Apparently they ‘unpublished’ this?

People have noted that they put a picture of the Jewish Shapiro in a gold star, too. And these Slack screenshots telling Breitbart employees to stop defending Fields a few days ago are kinda amusing. 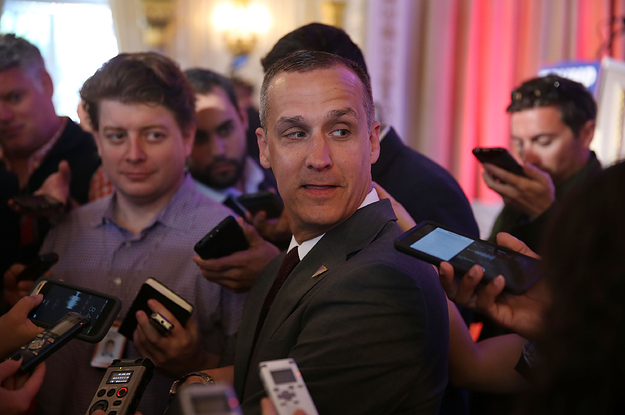 The story was replaced with an extremely terse retraction and apology from Joel Pollack.

It’s sort of “funny”, because the comment section on that one flip-flops between accusing Democrats of falsely accusing conservatives of being racists, to flat out open anti-semitism.

Breitbart as a whole is sad. I get the impression it’s a collection of /b/tards, other similar trolls, and angry retirees. Lately, they’re taking turns throwing each other under the bus for either supporting Trump, or not supporting Trump.