Most BMW drivers are jerks, according to science

I know I’m going against the flow here, but perhaps the headline could more fairly be:

Some BMW drivers among 461 cars (of which the actual number of BMWs is not disclosed so is probably small) were jerks, if by jerk we mean they yielded a tiny bit less to pedestrians than other cars. P=0.03

Why yes, I’m a scientist not a copy writer, how’d you know?

Oh, and there’s also this from the research article itself (but strangely lacking from any of the global reporting): “95% of the variability of yielding was caused by unobserved crossing-specific attributes.”

Which I translate as meaning: we don’t know why some people yield and others don’t.

But then again, my ex-MIL bought a used 600SL for around $12k, and apart from gas mileage and tires, got a surprisingly good long term ROI. I still maintain that that was a stupid decision on which she got lucky, but holy christ, I didn’t complain that few times I got to drive that thing. What a decadent cylinder-to-seat ratio.

Any time you feel down over wasting your life at a stupid, pointless, useless job, just remember there’s some poor bastard in Munich who designs turn signals for BMWs

I remember making a comment on BB about Mercedes drivers a while back. Someone said it was just confirmation bias.

Can confirm. I used to have a BMW and was more of an asshole at that point. Now I do not, and I am less of an asshole. They must be related!

As stated, it sounds stackable at first to me…

But if you want to be all Zenos’ paradox about it, it still only takes about $100k above that undefined n0 before chance of stopping drops to <5% and t doubt that M6/M8 drivers are plowing through 19 of 20 pedestrians in front of them. Hard to be mathy about something that’s a bit loosily goosily defined to begin with.

/drove a Renault LeCar once
//why yes, it was dangerous and awesome all at once

True, after we dented it a little, they refused to take it back for full deposit at the bottle depot.

BMWs are lovely, but I’m not sure ‘reliable’ is a term I’d affix to them.

Older ones were extremely reliable. My brother has an 1989 E34 and it’s impressive that it still mostly works with very little servicing. Sadly I’ve heard that some newer ones are engineered to fail. For example I’ve heard that the timing chain sprocket can be only replaced with whole crankshaft, as they are a single part, making replacement way too expensive.

Talk like that gets you Ladas, do you want ladas? Because that is what you will get!

That’s not necessarily a bad thing. Lada Niva is a nice 4x4, parts are cheap and with that look nobody will steal it. 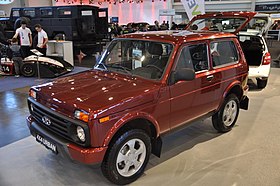 The Lada 4×4, formerly called the Lada Niva or VAZ-2121 (Russian: Лада Нива; Niva (нива) is the Russian word for "field" but meaning crop field), is an off-road vehicle designed and produced by the Russian (former Soviet) manufacturer AvtoVAZ specifically for the rural market, although models made for urban use are sold. It was the first mass-production off-road vehicle to combine a unibody architecture with a coil-sprung independent front suspension, and is a predecessor to current crossover SU...

Asshole cyclists are assholes, but simple physics means that they are considerably less dangerous assholes than assholes driving BMWs.

I would be interested in the companion study where volunteers drive onto freeway entrance ramps and attempt to merge. I have a hunch that whether the freeway driver speeds up to block the volunteer drivers from entering or slows down to let them onto the freeway, will correlate.

if you want to be all Zenos’ paradox about it

yes, I was being <gesture variety=“jerk-off”>pedantic</gesture> about the difference between percent and percentage points

Well, this confirms my biases–I’m sold.

I don’t use the original phrase any more, but every time I get cut off by a BMW, I do mutter, “OK, Beemer.”

I’ve considered making up some magnetic silhouettes to afix to road signs. Specifically, to add “BMWs ONLY” to the right-lane-ends signs.

In all seriousness, I don’t think I’ve really observed this supposed behavior in BMW drivers. I see people doing crazy driving in every single type of car/bus/truck imaginable. I guess Baltimore has some of the worst auto accident rates in the country, as reported by insurance carriers. It’s nuts, and you see it as much in the multi-year-old Toyotas and Hondas as with BMWs, Audis, etc.

Yeah, if we could have afforded more than the bumper of a new car, that would have been an option. My husband drives a 1997 VW Passat and my car is a 2001 Subaru. Both are more rust than metal but they work well.