What was that saying?

Being a jerk to a jerk does not even out the world. It just means we have two jerks now.

I want to see Sesame Street re-enact this with Elmo doing the right thing.

Actions have consequences. And also, being a bastard works.

Boy, I’m sure that the dude who can’t handle being flipped off without losing his mind and then enacting a 20-minute revenge involving premeditatedly grabbing a rock to smash someone’s window in (before scampering away as fast as possible) didn’t do anything to warrant the minivan driver flipping him off in the first place…What an absolute fucking child.

If he’d managed to throw it back in the open passenger side window with a note that said “No littering!” that would have been something.

Not to condone violence but fuck that van and everyone in it. Dude threw a full water bottle at homeboy’s face, if he wasn’t a badass he would have wiped out.
Guy had it coming.

I keep forgetting Trump got elected.

I don’t know if you’re implying I voted for Hitler lite but I can assure you I didn’t, being a yellow dog Democrat.
Both parties in the video are dicks but the van’s dicks are ickier.
Ps I can have an opinion without being pigeonholed by someone telling me how I should think.
Have a nice day.

Both of the people in this video are idiots. Boing Boing and why are you celebrating this stupid and dangerous behavior?

Being a bicyclist and a motorcyclist I’ve learned to be much more level headed on the road than I use to be. Learned by experience.

Being a bastard just creates another bastard, and make the world a little shittier.

Both of the people in this video are idiots.

I’m not going to comment on the ethics of either party – looks like BB has that covered – but in a practical sense, motorcycle tangling with mini-van doesn’t seem too bright…

While I’m not keen on Homeboy escalating matters, the water bottle was attempted murder.

The rock, if it had hit the windshield, would have rendered the minivan non-street-legal, thereby immobilizing a driver who had just acted as an accessory to attempted murder, and needed to be taken off the road post-haste.

Yes, but he had evidence of an attempted murder (call it a likely plea to “assault with a deadly weapon”), but now this rider can’t bring this to the police without putting himself in some serious legal jeopardy of his own. Bad call, much as universal justice supports it.

There’s something wrong with the title of this thread. /s/Motorcyclist/Gentleman/

Could have easily been worse: 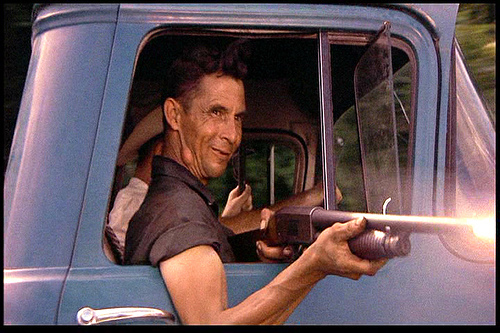 I hated the ending of EZ Rider: 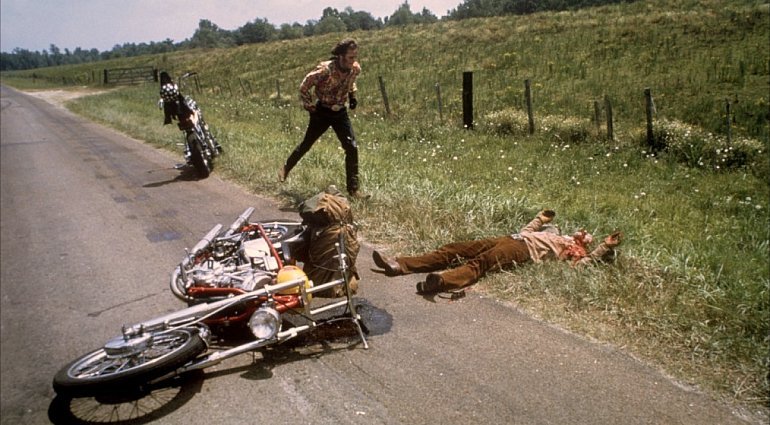 Umm… Yeah, he went overboard on his initial reaction, but a water bottle to the face of a motorcyclist moving at high speed is a seriously dangerous escalation (and assault). He didn’t throw that rock over a flipped bird.