Originally published at: Mountain Dew and Fresca banned in EU and Japan because they contain an ingredient that can lead to memory loss | Boing Boing

Don’t Fresca drinkers sometimes suffer from other side effects as well?

I hate Mountain Dew, so this doesn’t affect me. I hope they don’t put this stuff in Fresca, though.

I hate Fresca so this doesn’t affect me. If they start putting it in Mountain Dew, though, I’m in trouble

I’ve seen. Mountain Dew here in Germany, so it must be a recent ban. Or it’s a version without that additive, which doesn’t seem to do anything other than lengthen the shelf life.

I’m wondering what’s up with Squirt. I see some labels on an image search with BVO in them, but also some that don’t. Perhaps it depends on which country it’s manufactured?

The chemical suspected of causing memory loss is a whole lot less likely to do that then, say, alcohol. Last time I checked booze is still legal in the EU and Japan.

after drinking excessive amounts (more than 2 liters a day)

Honestly, seeing how many energy drinks some people are drinking, that doesn’t seem unrealistic at all

Diet Mountain Dew guzzler here. PepsiCo removed brominated vegetable oil from Mountain Dew within the last few years, so that’s probably not the cause of my fuzzy memory. I’m blaming it on creeping old age, and the fact that I want to remember as little about the present as possible.

Shit - I thought those years were fuzzy because of depression, meds, and trauma of divorce, but maybe it was my ~6can a day Dew habit.

I am down to 1 a day now. It is my morning coffee.

Mark Frauenfelder must have drunk a few too many old Mountain Dews it seems. BVO has been blanket banned in the EU since at least 2008 and individual countries might have had it banned earlier. CocaCola and PepsiCO (who makes MD) stopped using BVO in 2014 for most of their beverages (they used in essentially all their sodas) and in 2020 stopped using it for PepsiCO manufactured MD. Most of the drinks in question have had EU-made versions without BVO in years past. It’s just the american consumers who continued to be doused with the chemicals.

I looked it up and Mountain Dew changes the formula in 2020 and no longer contains BVO… sometimes. When they do the “throwback” recipe they’ll temporarily add it back in. There are other sodas that may or may not still use it 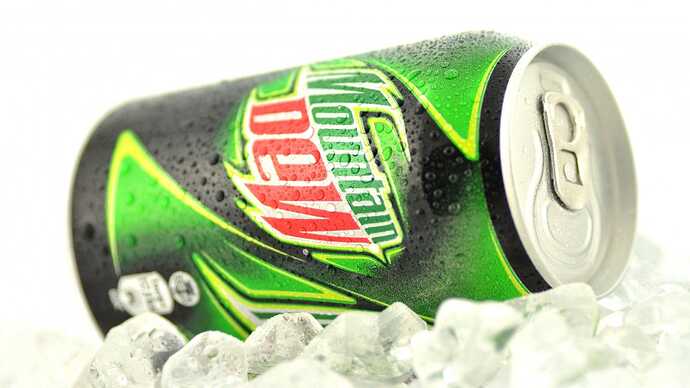 Fact check: PepsiCo pulls contentious BVO from Mountain Dew but it isn't a...

Hilariously enough they make a “Mountain Dew Throwback” which still uses BVO, the selling-point is that it is made with real sugar instead of HFCs but I guess they felt the need to balance the loss of unhealthiness with no HFCs by re-adding BVO.

That “fact check” article is something else.

“Some countries” is a funny way of spelling the whole of the EU amongst other countries who have it banned.

The fact that it has bromine in it & bromine is used in fire retardant doesn’t mean much. Table salt has chlorine in it.

On the other hand, the fact that there are reputable studies linking bromine to memory loss should be much more concerning.

“experiencing memory loss and skin and nerve problems” sort undersells what happened, it was “Bromism” a condition that was extremely common back in the day, often confused with schizophrenia. The soda guzzler in question also lost the ability walk amongst other symptoms. Skin loss is “bromoderma” and looks more like black plague symptoms rather then skin rashes, not recommended to google.

Oh bromine itself has been known for ages as incredibly dangerous and hazardous to humans. So much so that it has it’s own condition “Bromism”