Musicians tend to hate it when Republicans use their music

It always surprises me that even in slick campaigns, and despite the number of times this has happened, how often the campaigns neglect to ask the artist’s permission. Maybe they think it’s easier to ask for forgiveness, but they don’t even seem to bother with that.

Sometimes I wonder if it’s someone working for the campaign with a “sense of humor”, or the candidate hears the chorus of a song and cluelessly demands it. Then no one working for them has the balls to explain the problem/irony.

Depending on if the music is cover or not, the artist may not have a right to restrict it’s use. If the campaign had a cover done, or got the permission of the cover artist, the original artist can’t refuse to allow it. All they can do is publicly complain. 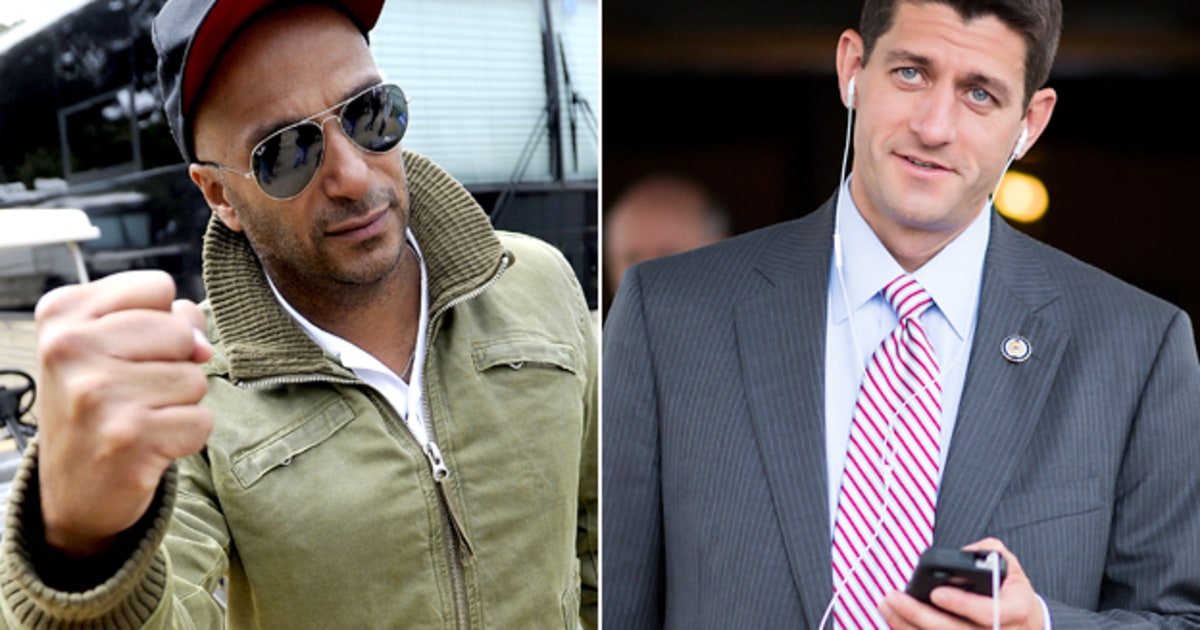 Tom Morello: 'Paul Ryan Is the Embodiment of the Machine Our Music Rages...

That was the first one that popped into my mind on the subject of clueless F#cks.

Possibly the most rediculous of them all!

Tom Morello Blasts UKIP Leader For 'Racist' Use of RATM

Tom Morello Blasts UKIP Leader For 'Racist' Use of RATM

Clues to the Manic Street Preachers’ political leanings are not hard to decipher among their allusive lyrics and public pronouncements.

Their hymn to the International Brigades - If You Tolerate This Your Children Will Be Next - contains the lines “So if I can shoot rabbits/Then I can shoot fascists”, making quite plain their attitude to Franco and his falangists.

The Welsh band might have been surprised, then, to find the song on the British National party’s website, playing over clips of an article which, according to the far-right group, reveals the “violence, hatred, fragmentation and despair” wrought on London by the “great multicultural experiment”.

According to Rolling Stone, EMI took action after Limbaugh told a pair of reporters in 1997 that "it was icing on the cake that it was [written by] an environmentalist, animal rights wacko and was an anti-conservative song. It is anti-development, anti-capitalist and here I am going to take a liberal song and make fun of [liberals] at the same time.

According to Rolling Stone, EMI took action after Limbaugh told a pair of reporters in 1997 that "it was icing on the cake that it was [written by] an environmentalist, animal rights wacko and was an anti-conservative song. It is anti-development, anti-capitalist and here I am going to take a liberal song and make fun of [liberals] at the same time.

Forgot about that one.
God, he is such a bloated, drunken, pill-popping asshole.

My first association with the title “Brand new day” is Dr. Horrible, not Sting, which would have made for a very different message

God, he is such a bloated, drunken, pill-popping asshole.

I don’t trust people that can’t control their vices.
They can do whatever they want - but I don’t trust them. I drink booze, I have friends that smoke pot. Actually, I think I know more people that DO smoke pot at least a little bit than don’t… But none of us abuse the vices.
I remember when Bush 1 was running for office and I would ask supporters if they were seriously considering voting for a fucking coke-head dry drunk. That was not me just being a smartass. Paul Weller: “Eton Rifles? What Did David Cameron Not Get?”

Weller complains of the PM's appropriation of his Jam hit in in-depth exploration of his rich back catalogue in the new edition of MOJO magazine.

But as far as I understand it, you can use whatever music you like, as long as you stick to the licencing laws. Although not clearing it with the artist will tend to cause embarrassing headlines like this…

I don’t trust people that can’t control their vices.

If the music is played somewhere with an ASCAP license, then effectively the music was approved.

Rush Limbaugh was taking illegally obtained pain pills because he was abusing them
recreationally. Not because he was in any real pain.
He’s a loser and a hypocrite of the highest order as the guy has gone on record saying that anyone that “takes drugs” is a criminal, etc…
Fuck him.

The cynical side of me thinks they choose music like this to reinforce the “us versus them” victimization mentality. They could choose pretty much any country artist (Dixie Chicks excepted), or something by Lynyrd Skynyrd or Ted Nugent with no problems.

They never bother because they don’t care. The artist has very little to stand on legally, and it’s not a moral failing not to fawningly seek their approval. People generally don’t even listen to the lyrics as much as tone.

From a copyright law perspective, if it’s just at a campaign event (as opposed to a commercial), then it’s all about whether the venue paid their public performance license, the venue’s blanket tribute to the copyright warlords. The artist can in theory sue over things like right of publicity (“Donald Trump is tricking people into thinking Neil Young endorses him”), but winning that fight requires convincing legally-minded people that reasonable people believe that playing a CD equals an endorsement. In this day and age, everyone knows that’s not so. Artists can politely request, put the campaign on notice, and just accept that by then the “damage” is done, but that’s the practical extent of their rights on the matter.

From a non-legal perspective, I don’t think we should consider this a moral failing. Ultimately, everything is public, and everything is supposed to be recognized as public. Copyrights are an ugly hack meant to make sure an artist gets something for contributing to human culture, but it’s still part of culture and supposed to be ours to use, appropriate, comment upon, and re-mix. Most songs worth hearing take on a life well beyond their original writer performer. I don’t think an artist feeling bad that someone played his CD at a rally – even one as goofy as this – is worth eroding that fundamental notion even more than we already have.

Finally, one small point about American Woman, Born in the USA, and similar songs: you can’t insult America through song. It just doesn’t work. Everyone just focuses on, “hey, they wrote a song about us!” We still sing Yankee Doodle Dandy without a hint of irony. You can argue that they songs don’t send the right message (which is true), but for the most part no one notices or cares.