I bought this same wallet when you posted about it last month and feel the same way. It’s been great.

If you have to fold your money, might as well just go truly minimalist with a money clip.

Get a haircut, hippy!

FWIW, I have what looks like the same wallet, albeit in a different color, and it’s gotten heavy use for years with no trouble whatsoever.

Just checked to see if there was a brand name: Fromb Design. So, different brand name, but could well have been made in the same factory.

One evening and a few tools. Holds about 5 cards snugly and has a small slit on back for the rare occasion I carry cash. 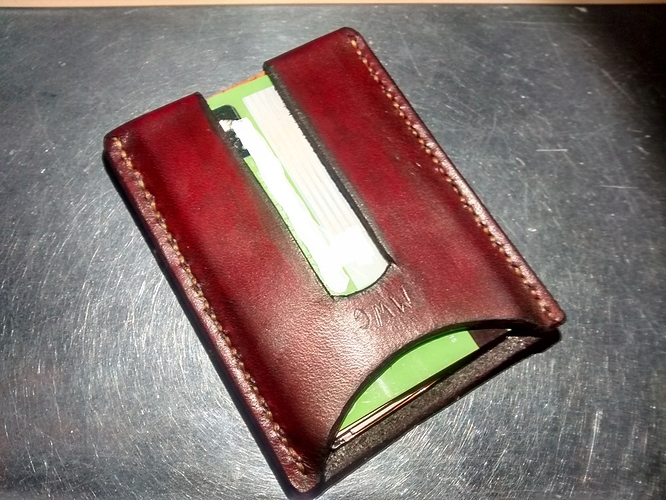 Another way of looking at it is that you’re carrying around a remote-readable, machine-readable token, so with the right hardware I can tell when you walked by where. And said hardware can be a lot more innocuous looking than a camera.

It’s just the walking around, trying to hold an RFID reader an inch away from someone’s butt that might give you away.

The RFID chips used in cards have a short transmission distance, unlike the store security chips, which can be detected from several feet away.

He just woke up, I think… Unless he’s one of those people who spend hours getting his hair to do that…

With fine-width hair that reaches just past my shoulder blades, I could achieve that muss simply by doing nothing with it. Hence my motto: ABC…always be combing, or at least every night and morning. Otherwise the Gordian Knot would have nothing on my hair.

You know what’s a great way to stash your cards and money without having to get a wallet?

Poor Rob. BB is going to be dinning out on that joke for the next five years!

I was just in the Philippines for the first time and felt really conspicuous digging through my standard bi-fold wallet while trying to find the right bills. This reminds me I need to get something that is a bit more subtle.

Your $6 fake id tho? Not so much.
Those things have the DOB field filled out for a reason. You’re never gonna be able to get a keg for this weekend’s senior party without a complex daisy-chain of hijinx and life-lessons.

I’ve used zippered cloth coin purses that are a little larger than the dimension of cards for years. They cost $3 and last at least a year.

Same idea but nice (if I have to use it every day…):
http://www.saddlebackleather.com/front-pocket-id-wallet

This is the one I have. I love it, when I need a bunch more room (like international travel) I toss a large wallet in my backpack.

$70…$6…$70…$6. Though to be fair it’s actually $11 or so with shipping. And theoretically the Saddleback will outlast you by some decades. But my previous wallet was a pleather thing that’d cracked in half and was held together with two remaining threads and duct tape, so $11 one-click was pretty special, and I didn’t even know it was RFUD-proof. Let’s compare notes in thirty years.

I bought a leather double card/id holder type thing 12-13 years ago which currently holds beer tokens (aka folding money), loyalty vouchers, drivers licence, and about 8 or 9 cards and it cost me about £5 from a street vendor in Devon but I’ve yet to rave about it (oops, done it now) but I guess I don’t work for a web-site with advertising to think about

Got mine at Daiso in California. $4. Nylon, with zipper. I like the zipper because it actually thwarted a pickpocket in Barcelona (he couldn’t get my money out while I was chasing him after he lifted my wallet so he eventually threw it back at me.)

I bought 4 of 'em so I hope I never need to find a new one again. Link to photo on Japanese website

I couldn’t agree more. I’ve also have the Saddleback minimialist wallet (though I think they call it the “front pocket wallet” or somesuch) and after 12 years of everyday use, it’s clear that it will easily last the rest of my life. It was expensive - I think it was about 35 bucks when I bought it, but that was more than a decade ago, it’s likely closer to $80 now. But even at that price I can’t recommend it enough.

I bought it at $35 like @TheUnspokenName, and I would still probably buy it at full price from SaddleBack compared to Aonal which is one of thousands of companies featuring Chinese produced goods and spoofed reviews. It has no credibility when it comes to RFID protection, and as I mention I’ve had it for a decade with only a little stretching of the leather and no other damage.

That is beautiful, and I was going to tell you to go to the Maker thread, but I can’t find it anywhere.