Mythbusters is coming to an end

Sad to see it go, but this season just really hasn’t been the same without the whole team. 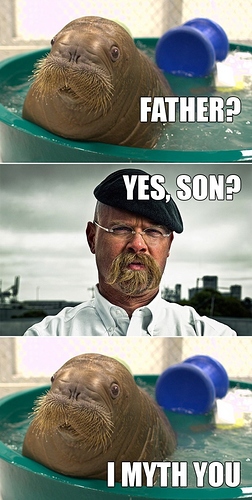 i wish i was a millionth as cool as all the peeps on that show.

I agree. I was hoping in that interview they’d talk about that decision. Maybe I’ve missed it, but I’ve never read anything that discusses it.

Wait, Mythbusters is still running? They’ve been so low-profile since the mishap with the bowling ball, I kind of assumed it had quietly been yanked already.

The only reason I’ll miss the show is for the sake of nostalgia. The show hasn’t been that great for a while now and they don’t really have the kind of “real” myths to bust like they did at the beginning of the program.

I think they do a greater service busting movie myths, as people tend to accept them without much questioning and end up with incorrect ideas about the world.

I will miss the show immensely.

“Mythbusters is coming to an end”

I’ve started watched it more without the Build Team. I loved all four of them, but towards the end the show got formulaic and cramming in both the A and B storylines didn’t leave enough time to show anything other than a few minutes of the build but had enough time to dedicate the last 8 minutes to an explosion. Too bad they couldn’t have expanded the show and given each storyline 45 minutes instead of 30 (or, ya know, cut out the teasers and trailers that people just fast forward though).

This season, they’ve shown more “science content” than I can remember in years and showed more of the actual build, which was half of the reason to watch the show instead of just reading Snopes.

I enjoy the show and wish them well. Their science was at times a bit dumbed down, but better than 99% of what passes for science in the public eye. I know the show is US-based, but for scientists and engineers everywhere, can they please do any future shows using metric units? Include the “six football fields/12 fully loaded 747s/twice as fast as a rifle bullet” analogies to help Americans, Liberians and the good people of Myanmar understand it if necessary.

The movie and TV tie-ins, plus the high count of “let’s revisit a myth from years ago” segments, lead me to think that they’re just not getting as much usable material from the audience.

Still, B- Adam and Jamie is a lot better than A+ most other stuff. Ave atque vale, guys.

I always suspected that was the reason for Dirty Jobs being cancelled by Discovery.

I wish I’d seen more of the series, but I’ve rarely had access to premium cable over the last many years and couldn’t be bothered to seek it out by other means.

One of the few episodes I watched included the “Does toast fall butter-side down?” test, and I found it very disappointing. They made a device that replicated the typical toast-knocked-off-table motion and found that it did indeed consistently result in toast falling butter-side down, which is entirely consistent with established mathematical models … and then quietly disregarded it and continued building something else entirely.

[quote=“anansi133, post:5, topic:67924, full:true”]Wait, Mythbusters is still running? They’ve been so low-profile since the mishap with the bowling ball, I kind of assumed it had quietly been yanked already.[/quote]Gee, I missed that story completely.

A cast iron cannonball rocketed through two homes and landed inside a minivan Tuesday when a “Mythbusters” TV experiment went wrong.

Honestly, I can’t say I’m that bothered. I mean, sure, Mythbusters is great, and I don’t have any problem with the show - but all things come to an end. It’s not like Adam and Jamie are going to stop producing things. It’s been a great run, and I look forward to seeing what they do next.

I look forward to seeing what they do next.

Well, I’d say that depends how much you like slashfiction.