Any records showing that someone has actually been victimized by this horrible idea?

Well, I suppose that after some four decades of newspaper headlines about this, it was bound to happen somewhere in the world.

/ The bars’ wrapper wouldn’t be air-tight any more, it should be relatively easy for older children and parents to detect them.

// Me, this year, I gave out rocks to everybody. Absolutely no danger of needles or drugs in those, eh.

At least in the past it has been the person making the clam type of hoax. And a nail the size shown there would show obvious signs of tampering on the wrapper and bar.

Me, this years, I gave out rocks to everybody. Absolutely no danger of needles or drugs in those, eh.

I wanted to give out scoops of baked beans, but my partners wouldn’t let me. I guess it’s a good thing we were away from home Halloween night.

Snopes lists some real examples of this.

And according to that for all the years of reporting, it wasn’t till 2000 that someone was not doing it as a hoax. Wanna bet this case turns out to be a hoax/prank?

My kids are allergic to needles. Please hand out carrot sticks instead…

You’re one of those anti-vaxxers, aren’t you?

Me, this years, I gave out rocks to everybody.

As long as you called them “blockhead,” that’s kosher.

Just like cyanide in the Tylenol, it must have been true somewhere, once, but the decades of fear are far, far out of proportion. This is the definition of terrorism. Not spreading the rumor is how you fight back.

Sometimes my father would “check” the better candies in my haul by eating them himself.

Maybe this was some kid’s way of getting revenge.

actual rocks? i’ve vowed to buy foam rocks and give them out every year for ages, but i’ve never done it. i don’t want to give out REAL rocks because i’m afraid they will find their way to my windows…

I’m leaning towards prank by some stupid people who crave attention. When reading the news story over at my facebook page, most of the items stated the stuff came up on facebook first, before anyone alerted the police. Only one story I read said someone called the police first.

There are at least two people in my facebook circles that are like the Tamagotchi of facebook, with some new crisis every single week, and I often wonder how far it’s going to go for them to get the attention they seek. I certainly hope this isn’t the reason for these needle/razor incidents. 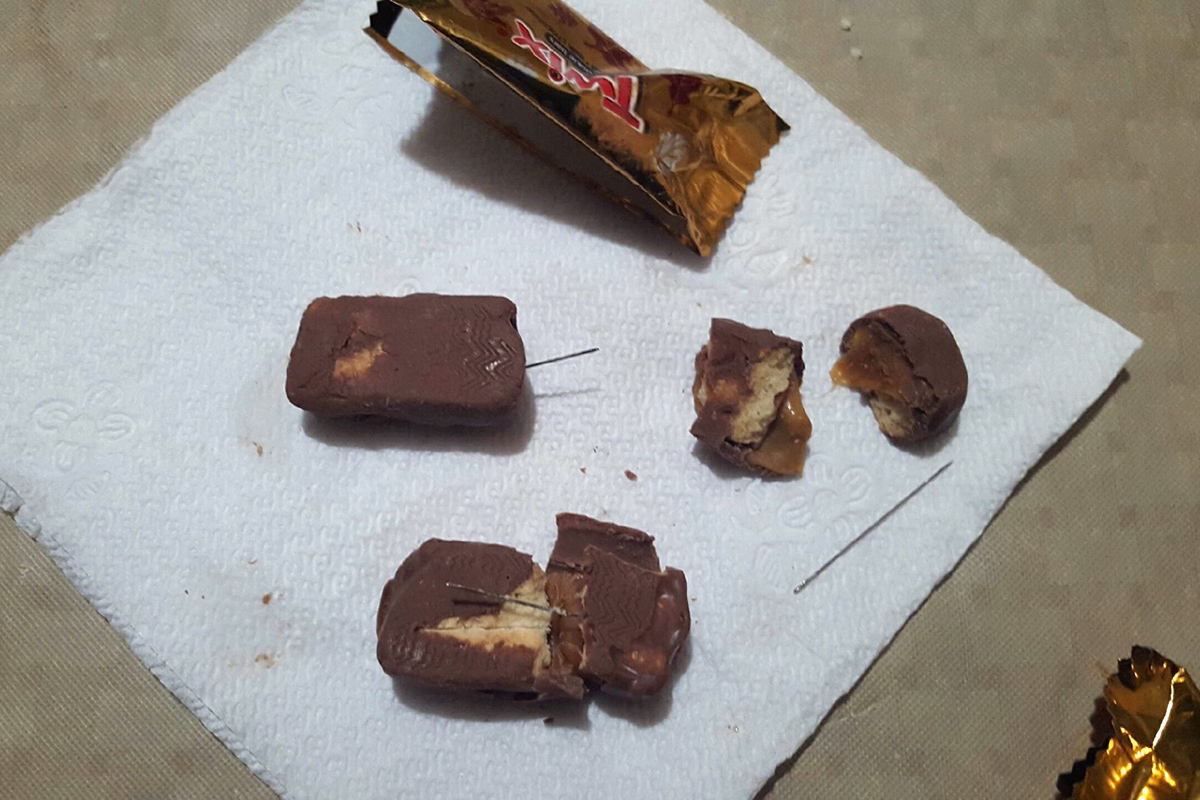 At least one of the reports of tainted Halloween candy in the Philadelphia region this weekend has been determined to be false.

I thought they were talking about this:

The reference in the Snopes article goes to Professor Joel Best who updates his research every few years. Only 92 incidents from 1958 to 2013, with most of those happening before 1983. The incidents are very rare and not serious. You can read more about it at the link. He also concludes that even for the incidents that he found, a large fraction of them are hoaxes. For instance one of the incidents reported right here in this post is a hoax. Here is a plot for the trend minded:

I agree, the real cases are extremely rare and most of the razor blades and needles in candy are urban legends and hoaxes. My single reason to bring up Snopes was to answer @NickSay’s question: Records show that someone was actually victimized by this horrible idea.

I thought the cases of actual tampered candy were soooo rare that they were basically non existent. And IIRC nearly all the cases were from the actual parents or someone the child knew. I’ll have to read that Snopes article later.

Me, in the 70s. I bit into a candy, and got a sewing needle into the roof of my mouth.

With no way to identify which of the hundred houses I got it from, or whether it came from the store that way, there was nothing to do. However, I do use a large neodymium magnet on my daughters candy before she eats any.