sigh There are certainly judgemental Jews–I left my childhood community because of them–but the Christian “Old Testament” is not the Jewish Tanakh, which consists of the Five Books Of Moses, the Prophets, and the Ketuvim (Writings), plus the Oral Torah [1]. The Christians reordered the books, ignored the Ketuvim, and, this is key, didn’t take any of the commentary and scriptural analysis with them when they split off, and especially didn’t take the Jewish traditions of actually interroga…

Video for High on Fire's "The Black Plot" will melt your face off! boing

I almost expected the Loc Nar to make a cameo.

Because there are not enough Heavy Metal references in this world

For combining truth with biting wit:

Even by Chris Christie standards, his lie about Trump's birtherism is a whopper boing

I live in New Jersey so I feel I can call Christie a walking talking human sized turd. The governor of Montana does more for this state by 9am eastern than Christie does in an entire month.

Edited to add: really, a lot of the posts in that thread.

This is wildly incorrect, should read

People upset when a famous black athlete takes a knee, but unaffected when an unknown black man takes a bullet.

White people do love their sportsball. Also if you want to see widespread rage, show a dog getting shot. Humans don’t register as much.

Best Facebook response I’ve seen yet: “If I gave you a bowl of skittles and three of them were poison would you still eat them?” “Are the other skittles human lives?” “What?” “Like. Is there a good chance. A really good chance. I would be saving someone from a war zone and probably their life if I ate a skittle?” “Well sure. But the point-” “I would eat the skittles.” “Ok-well the point is-” "I would GORGE myself on skittles. I would eat every single fucking skittle I could find.…

I agree entirely. But I think that people are sorely out of practice in discussing social issues in any meaningful way and need all of the practice that they can get. Obviously, trolls are people who speak from a dishonest rhetorical position, but this doesn’t prevent one from sharpening their skills (or claws) upon it. IMO honest engagement sets a better example for both the troll and casual readers. Not unlike a debate club, it is still a good exercise even if people are not arguing for/again…

Stumped on a Computer Problem, and talking about radioactive waste incidents

Couldn’t fix it because I don’t have steady hands, so my best solder jobs end up looking like this: 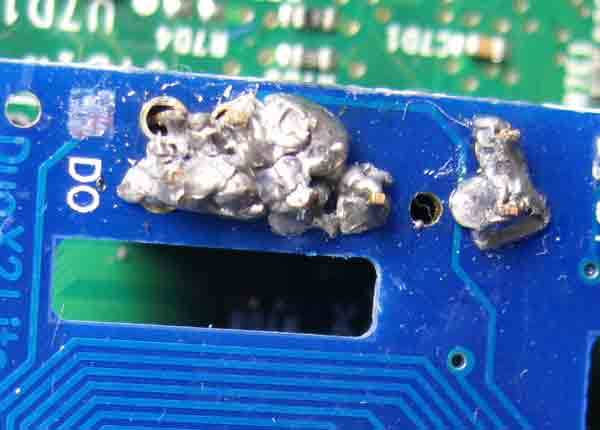 The single best thing I’ve read on the BBS for quite some time:

Putting that dusty liberal arts education to use, FTW!

Imagine the life he’s lived up to now that has made such self-awareness unnecessary. When birds of a feather flock together, they don’t realize how much shit they drop underneath them.

A procedure best left to a URLogist.

A think of beauty!

This is how the inequities of capitalism persist. The people who are struggling the most are convinced to fight each other for scraps, while the wealthy sit above playing them like pawns.

Just don’t let that shit show in prison unless you’re a fully initiated member of the Happy Mutant Nation. You might just find yourself with a banana shank buried in your ribcage before you even get a chance to look at it.

I have to say it is really refreshing to see Clinton-bashing based on her upholding the law and not being corrupt enough.

This literally made me laugh out loud.

Yep, the whole "as a father of x daughters" thing is infuriating. See also "as a husband/brother/uncle/any-man-who's-ever-known-a-woman". How about "as a human being who isn't a misogynist arsehole"?

Yes. A million times this. Then again I also get immensely pissed off by the whole “I’m more important than you because I have kids” mindset.

I’m more likely to respect the opinion, view, emotion, analysis, conclusion of people who don’t attempt to add weight to their views with “as a XXXX”. Their self-professed emotional investment in, closeness to, and expertise on, the issue is purported to make their insight somehow profound. I just see them as conflicted. See also Xtian mom who “as a mother” took offence at some rap lyrics. Another particularly ludicrous example was when a bus passenger, after a bus they were riding in was involved in a crash, was asked to offer advice on road safety.

People who are well-informed and passionate about important issues that DO NOT impact them directly are the most likely to influence my thinking. Sadly, many seem to think these people are unqualified to offer insight. Quite the opposite in many cases.

See also Xtian mom who “as a mother” took offence at some rap lyrics.

She didn’t want her kids listening to those lyrics. I don’t fault her for that, because that’s a parent’s job. It was her over the top ignorant and sheltered response to the lyrics that got us all talking.