The silver lining for Biden: if he were to run against Donald Trump in 2024, those surveyed gave him a slight edge over the former one-term twice-impeached president with 44% vs. 41%.

Ah, so that’s why he’s been so silent about the crimes and perfidy of his predecessor. He wants to run against him again!

Newsom definitely has baggage… but I think those who already have a negative outlook on him and California in general wouldn’t ever vote Democrat anyway.

Again, I am open to others. I guess let’s get through the midterm first. If the Democrats can retain control of the House and Senate, at least not lose seats, it would at least be a thumb in the dike. Those results might mean that more people will get out in the primaries and pick a good candidate for the election.

I thought the point of picking her as Veep was to increase her profile for a 2024 run. Instead, it’s made her disappear.

I don’t know, but my impression of her has worsen in the interviews I have seen.

She may be capable in the role, but has trouble navigating interviews and the like.

Primary voters in wack states winnowing the field of who are considered ‘viable’ candidates before the cool kid states even get to vote is absolutely undemocratic.

I want all primaries on a single election day with ranked choice, I want that so much.

There’s a lot of dems that are fed up with the gerontocracy of the Democratic Party.

The GOP may be a bunch of fascists and enablers, but they developed their “talent” over past 30 years. The Dems are still using the same people from the Clinton administration.

At least the Dems talking about not having the bloody Iowa caucus and New Hampshire be the first primaries in 2024. They also know that they have to be careful about the superdelegate shenanigans. That’s about the best I expect from them, as much as I’d like a single-day nation-wide primary and ranked choice.

In the end, though, the problem remains one of the demographics that allow the party’s Third Way establishment to preserve its hold on the institution. We’re not at the point where enough Millenials show up at the polls to offset the clout of the Boomers, and until that changes the party will continue to favour elderly time-server candidates who still think it’s 1992.

That’s not what happened in 2020 though. It was a field of stillborn campaigns, with Biden coasting by on good vibes from Obama.

The most pathetic moment of the primaries was when Kamala supporters started complaining that Buttigieg should drop out after winning Iowa, because “it wasn’t his turn”. If you’re getting your ass handed to you by the mayor of South Bend, Indiana maybe there’s something wrong with your campaign.

until that changes the party will continue to favour elderly time-server candidates who still think it’s 1992.

I first read “candidates” there as “cadavers.” Sadly, I think it works.

Popular… that is a weird way of describing the establishment’s decision of who they are going to run.

Hopefully Dems and other Lefties recall the horror that comes when people decide to sit it out, or throw a protest vote, or pretend that “both sides suck so it doesn’t matter.”

I’d still vote for a turnip over anything the Republicans have on offer.

Really, no one in that age range should run. I have had relatives who have lived much longer than that but none of them who are 80+ have had the mental focus and processes that a president should have. He doesn’t have the mental presence to do this job. Out of a country of 300 million + people, we can’t find anyone under 80 to do this? I also think he’s not representative of the party and its future.

Primary voters in wack states winnowing the field of who are considered ‘viable’ candidates before the cool kid states even get to vote is absolutely undemocratic.

True and also frustrating. However, it is worth pointing out Biden generally lost those states in the primary and came-from-behind thanks to bigger states later in the primary order.

Has Cory Brooker vanished or did the run last time sink him as a possible candidate?

I think Biden has done a good job as a transitional president. He does seem to be be getting more negative reactions than I would have expected. I don’t think he was ever a viable 2 term president this time except for a really narrow range of democrats.

US politics isn’t polarized, it’s shifted far to the right (this isn’t an opinion, it’s objective fact). As such, centrists have shifted to the right significantly over time. 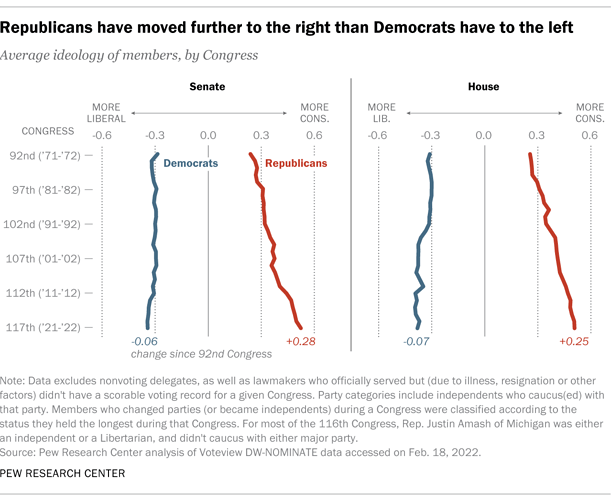 Yes. I always follow my voter guide from George Soros.

Come on dude. You sound like you completely missed the 2008 primary.

I don’t think Biden wants Biden to run in the next election. I also know that there is no way he can say that until at least late 2023 or it will be all that the pundits talk about forever. If he hopes or wants to accomplish anything - or at least allow things to be accomplished like the Jan 6 committee - then he needs to keep his cards to his chest until then.

It is certainly true that my preferences are less popular in the early primary states. Whether that popularity level is reflective of the popularity of my preferences in the wider population is an unanswered question. NH for example is fairly progressive on social issues, but very anti-tax/big government.

The most pathetic moment of the primaries was when Kamala supporters started complaining that Buttigieg should drop out after winning Iowa, because “it wasn’t his turn”.

I have to wonder what people were expecting from Biden. He’s been far more progressive as President than he was as a candidate. His cabinet is the most diverse in U.S. history; he ended the Afghanistan war; passed an infrastructure bill and a gun bill; undone a lot of bad environmental executive actions from the Trump years; had the best available response to Russia’s invasion of Ukraine, etc. Given the almost even balance of power in Congress, and the inevitable economic reverberations from the COVID years and the war in Ukraine, I think the old man has done pretty well. All that said, I wouldn’t mind if he did step aside in 2024, and let a new generation of leadership step up.

In the meantime, please don’t let temporary economic issues – almost none of which can be affected by a President (at least in the short term) – sour you on voting, and voting for Democrats up and down the ballot this November. We cannot let apathy allow these burn-it-all-to-the-ground Republicans regain Congress. Please get involved however you can.