New York Times devotes a 2-page spread to "The 281 People, Places and Things Donald Trump Has Insulted on Twitter"

Don’t you see? The recurring motifs, the repetition…
The full text of these tweets will be taught to future generations of students as an epic poem, along the line of Homer’s Iliad. “Crooked Hillary” is just an update of the format of “grey-eyed Athena.”

That “Full Size” is still illegible.

Do you have a PDF with actual text? The kind that’s movable type?

Or do I have to dig out a high-bit spline resampling filter and blow this up?

Imagetext is the DRM of literature, @doctorow . 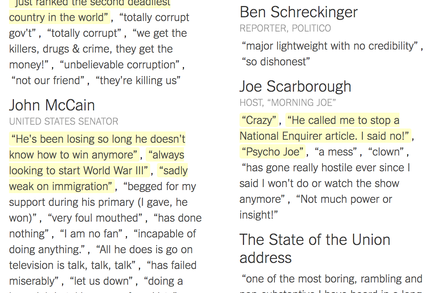 The 425 People, Places and Things Donald Trump Has Insulted on Twitter: A...

An attempt to categorize every insult Donald J. Trump has made on Twitter since declaring his candidacy for president.

Thanks, I think I made it a little better for all of us:

It would be cool if NYT would post an accompanying article highlighting the utter incoherence of his actual campaign platform.

It’s very difficult to get at the substance of either campaign. So much of the media coverage is talk about the latest Kardashian-style scandal or the poll numbers.

Why is the text all in tall narrow columns? It should be in wide short rows. Amiright?

A careful perusal of the list will reveal neither Russia nor Vladimir Putin was insulted even once, but I think he had some rough things to say about puppetry.

Someone should make this into a Cards Against Humanity style game.

I feel like this song written in the 90s was about Trump. Look up the lyrics, it works, I think.

For “fun” I threw this into a word cloud generator. Here you go:

Okay, it has to be in there somewhere, but I can’t seem to find “Corrupt.”

I fixed it. Most of the “corrupt” comments had quote marks which threw off the cloud generator. I put everything in Word and removed quote marks.

Those are just the ones from AFTER he announced his candidacy. I think that works out to a little more than one new thing to insult insult every two days.