and it’s working for him now.

Well there is a difference between making a determination that somebody is insane in a clinical, legal sense and saying that they’re “crazy.” And I, for one, am completely comfortable saying that he is “crazy” and that his personality makes him unsuited for public office even if I am not qualified to recommend a treatment. “Crazy asshole” is not in the DSM, but I find the evidence for that strong enough that I don’t think voting for his is a good idea. There have been plenty of politicians that I have respected despite disagreeing with their policies. Trump is NOT one of those.

You don’t have to BE a mental health professional to be able to form the opinion that somebody should SEE a mental heath professional. But you know the old joke: "What is the difference between insane and eccentric? A few million dollars.

Skip to about 1:35 to get to the Trumpiest part:

Bonus: Nicholas even does annoying and repetitive hand motions like Trump.

I’m worried that if @beschizza keeps up the Photoshop antics, in 3 months I’ll be mentally ill.

Tonight @tropo will dream of the many-mouthed trump head rolling across a nonporous surface, each set of ruby lips suctioning and popping off, like a rubber bathmat being pulled out of the tub.

@Ben_ehlers will have the same dream.

Not so much Vincent Price.

He reminds me more of Broderick Crawford’s performace as Harry Brock. 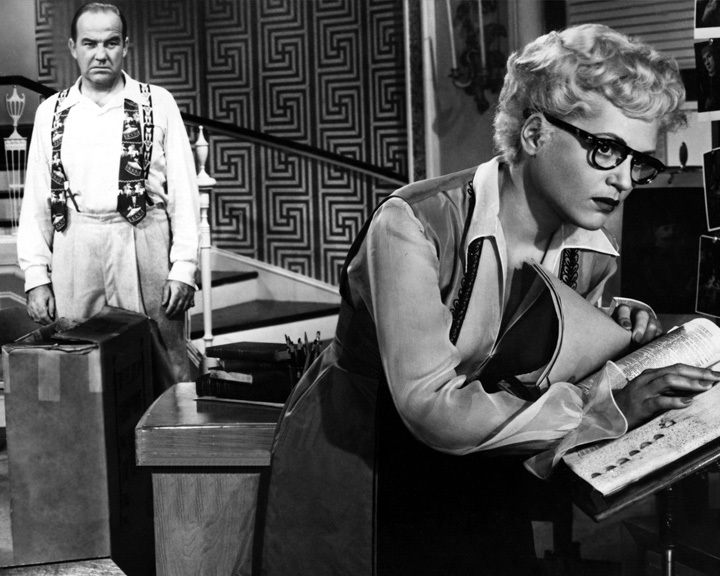 Enough already, we can see the crazy from over here in Australia, and believe me, we have some fucking high standards for crazy. We did after all vote back into government a prime minister who is keen to throw away medicare, against the wishes of everyone else. But I digress, Trump is crazy, batshit insane, a lunatic, howling at the moon, a few suites short of a full deck. This is not something you can sweep under the rug with a “you don’t know Trump” meme.

But he never, ever does.

Enough already, we can see the crazy from over here in Australia, and believe me, we have some fucking high standards for crazy. We did after all vote back into government a prime minister who is keen to throw away medicare, against the wishes of everyone else. But I digress, Trump is crazy, batshit insane, a lunatic, howling at the moon, a few suites short of a full deck. This is not something you can sweep under the rug with a “you don’t know Trump” meme.

Calling Trump crazy is like calling Hilary a bitch. It’s simplistic, and it feeds into stereotypes about marginalized people. It otherizes them, so that you can think that they are exceptional, unique, somehow special. You don’t have to take a “crazy person” seriously (and bitches ain’t shit but hos and tricks).

It doesn’t matter if Trump is actually mentally ill or not. What matters is that half of a country is going to vote for him because he represents their best hope for the country that they actually want to see. And those people have been conditioned by hacks like Brooks to value insults over substantive debate, because that’s what worked to sell them Conservatism for two generations. And now David Brooks is just using it on a target who, in the end, is much better at it than David Brooks.

(As an aside, that system is also at work in Australia, so for you I think Trump might be seen as a potential sign of things to come - stop it before it’s too late!)

Crazy like a fox is more like it. He has people enabling him as many have their jobs and careers to think about, and when so many people prop you up as they never say no to you, perspective gets warped.

I thought he would nominate Caribou Barbie for his veep just to make himself look smarter.

like every other politician? “I don’t know, but I will check” is a line I would love to here more often from my political overlords

Feigning knowledge on a subject someone asks you about is one thing, but Trump will frequently steer discussions TOWARD topics he has zero knowledge of just so he can claim to have a better understanding of them than the experts. His comments on the Ukraine are just one example.

He cannot be contained because he is psychologically off the chain. With each passing week he displays the classic symptoms of medium-grade mania in more disturbing forms: inflated self-esteem, sleeplessness, impulsivity, aggression and a compulsion to offer advice on subjects he knows nothing about.

His speech patterns are like something straight out of a psychiatric textbook. Manics display something called “flight of ideas.” It’s a formal thought disorder in which ideas tumble forth through a disordered chain of associations. One word sparks another, which sparks another, and they’re off to the races.

There are long standing rumors that Trump is a habitual user of amphetamines/stimulants in the form of diet pills. Now I do not generally take that sort of thing too seriously. Especially for cases like this. The original reporting of the rumors came from the same Spy magazine coverage that spawned the “short fingered vulgarian” description. They had a pretty big interest in trolling Trump. And I haven’t seen any coverage of the renewed rumors from anything that doesn’t reek of tabloid.

But as much as Brooks might be a hysterical asshole rather than a respected investigative reporter, he isn’t wrong about Trump’s behavior and speech patterns matching up curiously well with various forms of mania. And from what I can tell they’re pretty similar to the sort of mania that comes with long term amphetamine use, or heavy amphetamine binges. The more erratic he gets the more plausible the prescription speed rumors seem.

Now I don’t want to “I’m just asking questions” myself. But it strikes me that at this point the idea could use a little more scrutiny. So far I’ve only seen the idea crop up again among notable shit slingers as a kind of “laugh at Trump” easy headline. Especially over at Gawker. Because seriously those guys have been resorting to just lazy shit the last few months. They’ve been regularly pushing articles with beyond click baity headlines on the “Hey look at this asshole, he’s an asshole” formulation (and I mean that literally) to push articles that are little more than vacant nastiness targeted at noone. While everyone else was reporting on the novel (and apparently successful) use of bike cops for crowd control in Cleveland, Gawker went ahead and published a piece mocking those police officers for not riding their bikes like the cool kids do. Fucking seriously.

All in when diagnosing Trump with (more bat shit for brains) mental illness but, using Robin’s William’s name in the same sentence is just not right.

He is considering Ivanka for a cabinet position. No shit.

I think that cosplayers would refer to him as a “genderswitched Sarah Palin.”

Incredibly, even Palin is more qualified for the office. At least she has SOME record of public service, albeit a short and nutty one.

All in when diagnosing Trump with (more bat shit for brains) mental illness but, using Robin’s William’s name in the same sentence is just not right.

When internet laymen suggest that Trump is manifestly mentally ill … there are yet fair grounds for concern. You’re not a doctor. You haven’t examined him. Well, ladies and gentlemen, it’s quiet time: give a warm welcome to David Brooks!

How is this not just another layperson’s non-expert opinion (however much I agree with it)?

I think everyone in NYC had already diagnosed him as having Narcissistic Personality Disorder by the 1980s: 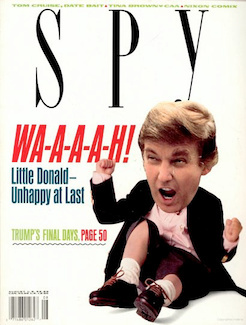 And Clinton is a pathological liar, but 50% of the voting population adore her. I fail to see the difference?

It doesn’t matter if Trump is actually mentally ill or not.

Not only for the reason @Daedalus mentions, also because the problem with Donald Trump is not any mental issues (chemically induced or not), but rather the horrible ideas he espouses.

50% of the voting population adore her

I wouldn’t say “adore her.”

“Trust her more than Trump to not start World War III” would probably be more accurate.