Very hard, not impossible. I haven’t read anything saying much more than that a lot of tow companies are sympathetic and that towing brake-locked trucks require special equipment, which the tow companies have. Cancel their contract with the city, bring in equipment from other cities or municipalities (I can’t believe the entire nation doesn’t own at least one truck capable of it). Hell, the city buying a capable tow rig would be a net gain.

Point is that everyone’s coming up with pretty feeble excuses and doing what appears to be nothing at all.

Well, until now; blocking external funding, freezing corporate and personal bank accounts, suspending insurance and… towing them. Which all sounds like something that could have been done two weeks ago. 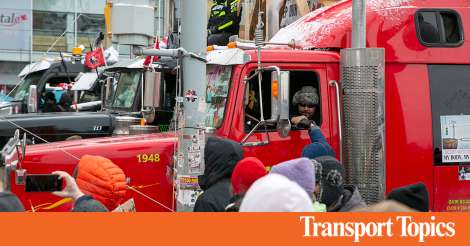 Prime Minister Justin Trudeau is invoking emergency powers across all of Canada to quell protests by demonstrators who have paralyzed Ottawa and blocked border crossings in anger over the country’s COVID-19 restrictions.

Wow, it’s like nobody ever heard of Yoko Ono. I used to co-host rather large parties in college, and when we were ready to shut the party down, on went the Yoko Ono LP, and out went our last guests. Amateurs!

I heard that when Ian and Will from Echo and the Bunnymen shared a place, Will would put on either Captain Beefheart or The Residents when the hosts wanted to end a party. That would have made me want to stay well past dawn.

Also:
There have been children present at all these assholes’ “demonstrations.” Why TF aren’t they in school/in virtual school?! WTF is wrong w/their parents [besides the obvious, that is]??!!

No one can keep the trucks from driving right back to some inconvenient location after they’ve been towed either.

If they are impounded, they won’t be back.

They should be using Pepper Coyote, he already given permission for shit like this: