NFL team traveled to England with its own toilet paper

I believe they actually play a few games there and have been for a few years now as while there isn’t a audience for an actual team they do have one for a few games. shrug

Here is Wikipedia on it.

Starting in the 2007 season, the National Football League (NFL) has hosted regular season American football games outside the United States every year. Collectively officially known through 2016 as the NFL International Series, from 2017 the series currently has two sub-series, the NFL London Games in London, which has been in place since 2007, and the NFL Mexico Game in Mexico City, which began in 2016 with a predecessor game in 2005. Initially, all games in the International Series were held in...

"Some may say that’s a little over the top or whatnot, but it didn’t really cost that much, so why not?” Aaron Degerness

A poet in the making!

They’ll have a team before too long, I reckon.

Jacksonville will be moving.

I remember the London Monarchs with the Fridge playing for them in NFL Europe.

The Australian Football League also plays demonstration matches in other countries, including the US. Not sure if they take their own TP though. The focus is usually on keeping the players out of drunken bar fights.

Whilst I agree that most publicly accessible toilets in the UK do seem to substitute a form of grease-proof paper for the TP, I assure out American friends that triple-ply can, in fact, be had at the local supermarket.

What kind of horrible diet they follow? Stones and grit?

If you were in charge of a something-billion-dollar team, would you balk at pampering them a little? It would be different if England was legendary for the cushiony softness of their nether tissues.

“We’re basically trying to replicate everything that we’re doing here over there.”

You don’t need special toilet paper to lose games and not make the playoffs every year.

But maybe they’ll do better in ye Olde England than they typically do in New England.

But the first time I visited America, I had two interesting experiences:

Of course, I had to contradict this insult to my continent’s toilet paper. It’s not true. Our toilet paper does NOT immediately dissolve upon contact with water, like my uncle’s roof apparently did.

I can understand people missing their “own” toilet paper no matter which direction they cross the Atlantic.

Always welcome in any discussion.

Hotel toilet paper does not count, nip to Asda and get a 18 pack of Andrex, sorted

I thought football was supposed to be a macho sport. 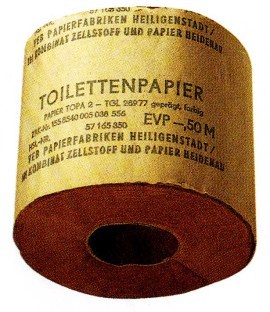 It’s not as bad as the brits holidaying abroad surrounded by other brits in their stupid union flag shorts getting a lobster colouring and spending all day in british-style pubs. Why! Just try the local cuisine and use their loo roll damn it.

When you’re eating half a chicken at every meal (or whatever their high-protein diet is, in support of muscle mass) I can see TP taking on special significance.

That sounds like the special non-absorbing napkins offered in American movie theaters. I would believe part recycled plastic. Just what you want with buttered popcorn.

This kinda reminds me of one of our bogan cricketers who travelled to India with his own supply of canned baked beans because he was scared of the food there.

My memory of my American visit: “holy shit, have you people never heard of water conservation? A toilet flush does not require a bathtub full of water.”

(the other memory was “given the ridiculous quantity of cheap food available everywhere, it’s astonishing that Americans aren’t even fatter than they already are”)

My memory of my American visit: “holy shit, have you people never heard of water conservation? A toilet flush does not require a bathtub full of water.”

I am convinced that the flushing toilet was actually independently invented on both sides of the Atlantic. The basic principle behind the device’s operation is different. European toilets just dump water on top of it, while American toilets use a strong stream of water to suck everything away.

The two designs seem to be pretty much equivalent. Unless they break when used with the wrong type of toilet paper. And, the water conservation thing, of course. Here in Austria, we’ve got no water shortage problems, so… Hey California, you’re not getting our water, but would you like to swap toilets? Maybe Arnie can organize something.

But there are still things that only exist on one side of the Atlantic. I have never seen a crushed ice dispenser anywhere in Austria. Instead, we fill water in those strange plastic things, put them in the freezer and wait for a few hours. A cold drink in summer takes some planning. As a consequence, most of us prefer their drinks without ice.

But, on the other hand, every household around here has one of those convenient electric bread slicing machines. They’re a really good invention. If we didn’t have them, then bakeries would need to slice the bread for us. And once the bread is sliced, the slices start drying out unless you add insane amounts of preservatives and plastic packaging, so selling sliced bread would be like the worst invention ever. I wonder who would ever consider that a good idea.

“And, the water conservation thing, of course.”

Around here, if you’re taking a piss in the forest and don’t aim it at the nearest thirsty-looking tree, you’re a selfish arsehole.

We aren’t real keen on policing “obscenity”, but throwing away potable water is about as obscene as it gets.