NSA has transcripts of Flynn talking to Russia about Obama's Sanctions

The NYT and WashPo both reporting from multiple sources that Flynn clearly had discussions with Russian officials regarding Obama’s sanctions in response to Russian interference in our election. Flynn was clearly undermining the standing president. This must be the start of the end for Trump. 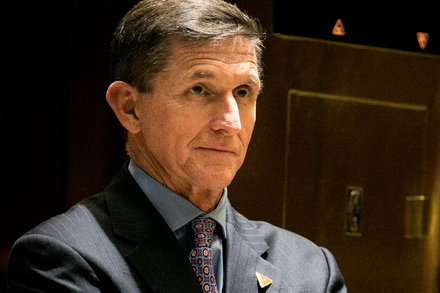 Flynn Is Said to Have Talked to Russians About Sanctions Before Trump Took... Flynn holds call with Pence amid calls for probes of contacts with Russian...

Then Pence, and Spicer, all went on television and baldly lied about this, saying Flynn did not discuss the sanctions on the call in question. To which the NSA replied - TRANSCRIPTS. Then suddenly Flynn said - “I don’t remember what we talked about”.

There are also reports of collaboration dating back to the campaign, with Trump communicating and coordinating efforts with Russia.

It is time to start the discussion of taking down this Admin, trials, prison, and an unprecedented re-do of our Election. GOP senators and congressment that failed to do their job to defend the nation from these criminals should also go down. Time to clean house.

This must be the start of the end for Trump.

But this gang of blatantly corrupt scumbags are apparently above the law - they should already have been hit with a ton of bricks.

After Snowden I never thought I’d be HAPPY to see the NSA in the news.

an unprecedented re-do of our Election

Will never happen. “We have a process.” The House certified, etc. Even if Congress hadn’t already been subverted in similar ways over the last few deca—, er, centuries, there’s a process: Pence goes in, Pence gets impeached, Speaker goes in. By the time the rubble stops bouncing, it’s midterm time, if not time to gear up for 2020.

Trump isn’t going to be removed from office unless a sizable portion of his own supporters turn against him—especially not this early in his presidency. If you thought they were angry before, can you imagine how out for blood they’d be if the “Washington establishment” forced their guy out of office “before he even got a chance?” The Republicans simply aren’t going to unleash that upon themselves.

This Russia stuff may well do him in, especially given that he’s made an enemy of the intelligence establishment, but it will take time to develop. There’s no quick fix to this. There is light at the end of the tunnel, but it’s most likely years away.

Horrifying health care will do it. Concerted anti-employee action will do it.

The Magical Honky (rich “problem solver” arriving in a helicopter) must be seen by the staff to be ordering in the Pinkertons and hooting gibbon-like at the misfortune of regular people. At that point, grabbing his daughter’s pussy and throwing feces at other celebrities will become visible jokes to the people “giving him a chance”. Bigotry will finally seem like a luxury. For a few.

Those few may be enough to finally cause a collapse of the Buchanon consensus.

no, not a succession process. The election invalidated, the whole lot of them go. GOP leaders implicit in supporting all go as well.

Never concede this, or nothing will happen for certain.

If the NSA brings forth evidence that Trump was coordinating with Russia to manipulate the election, as well as undermining the standing president before he was sworn in, then what happens?

GOP ignores it? Refuses to act on it? They can’t wish it away.

It depends on the strength of that evidence. If it’s a smoking gun that sparks universal outrage, then they can’t ignore it. If there’s deniability—if he can claim that it was just a rogue adviser acting alone—then it will only wound him. It’s easy to envision the Democrats taking the House in 2018 and spending the next two years bogging him down with probes and investigations. If nothing changes he could be a lame duck in two years.

no, not a succession process. The election invalidated, the whole lot of them go. GOP leaders implicit in supporting all go as well.

There’s no Constitutional process for that. The nearest equivalent might be to impeach their way down to Pelosi in 2018, but for that to fly they’d have to be caught eating babies or something. And the babies would have to be white.

This must be the start of the end for Trump.

Then Pence, and Spicer, all went on television and baldly lied about this, saying Flynn did not discuss the sanctions on the call in question. To which the NSA replied - TRANSCRIPTS. Then suddenly Flynn said - “I don’t remember what we talked about”.

How did this happen?? I thought the Trump admin used:

It depends on the strength of that evidence. If it’s a smoking gun that sparks universal outrage, then they can’t ignore it.

Both Pence and Trump, so far, have said (directly and indirectly) that Flynn “went rogue”. Do you see him being fired? I don’t see that happening today.

Best news is that once fired, which will happen after Trump sees the crater, NSA dude won’t be able to work as a domestic lobbyist for 5 years (and never again for a foreign power). The one good thing Trump did so far was that order.

If the NSA brings forth evidence that Trump was coordinating with Russia to manipulate the election, as well as undermining the standing president before he was sworn in, then what happens?

there’s a process: Pence goes in, Pence gets impeached, Speaker goes in.

because that. I’d hope Ryan would be smart enough to choose someone like Warren as a mark of humility for what his team has tried to do to our nation and the world. A guy can hope.

Followed by his supporters howling this is Obama trying to become king by way of the intelligence apparatus he propped up after the snowden leaka… Never mind we thought snowden was unamerican before you wanted us to see him as a hero right?

Do yourself a favor and wait for this to play out before you bring this up with the people you have to keep churning this stuff with IRL. Don’t argue this one with them. Let them come to their own doubts, then reinforce those! “Keep Your Powder Dry”.

While I agree we never should have gotten here, that this detour was very clearly marked, that more than half of us did not want to go off path, and we all (to some degree) ignored the signs at our peril – it’s only been 24 days since Inauguration and 97 since Election Day. In political corruption investigation terms, this is moving at space travel speeds, not freeway rush hour speeds.

It depends on the strength of that evidence. If it’s a smoking gun that sparks universal outrage, then they can’t ignore it.

Unfortunately, the idea of a President Elect talking to foreign leaders about what he will or won’t do when he takes office, either directly or through surrogates, no matter how illegal, is not going to cause outrage. At most this will result in the removal of Flynn. However, if this does get tied to more direct influence over Trump by the Russians, that’s where I think it blows the whole administration wide open; the idea of a Manchurian candidate, put in office through manipulations by a foreign government with blackmail material on him, who starts to roll back sanctions even before he takes office, would be the biggest political scandal in US history.

You are ignoring Trumps aversion to loosing. Once the writing is on the wall he will suddenly have more important things to do in his business and will resign. The rest will fall like a house of cards then.

Unfortunately, the idea of a President Elect talking to foreign leaders about what he will or won’t do when he takes office, either directly or through surrogates, no matter how illegal, is not going to cause outrage.

One of the presidents extremely vetted security officials lied to the president and VP, who then repeated those lies, about potential undue foreign inflence on the election, from russia, and it’s not going to cause outrage?

Not among the 20% that are happy to see things burn because they think it upsets librulz, no, but if you think the McCain wing of the party will stand for that I think you might be surprised. I hope so at least, hope mixed with some knowledge that responsible conservatives exist *(even if they’re not in charge at the moment).

This is a huge blow to Trump’s credibility. Maybe maybe not with the bulk of the people, but I feel comfortable there are a few senators who, on any issue, might now be shaken loose. I also expect this to lead to the call for his tax returns under that obscure rule that says the Senate can demand it under penalty.

Don’t get me wrong; I am outraged. I just don’t see the American public getting up in arms, because of course the new administration is going to have different policies, so who cares if they tell the russians that before they take office or after? There are some Reblicans who believe in the inviolate nature of the institution and decorum of the Presidency, but there are many who are happy to throw that out so long as they’re winning. What we’ve seen so far from Republican lawmakers is an attitude of collusion, constitution, law, and consequences be damned. I don’t see that changing unless it’s 100% verifiable that the Russians have used improper influence to get Trump to make policy changes on their behalf.

As for McCain, who can tell with that guy. One day he’s up in arms, shouting from the rooftops, the next day he’s on his back moaning like a whore. He’s as much of a self-aggrandizing opportunist as any of them.