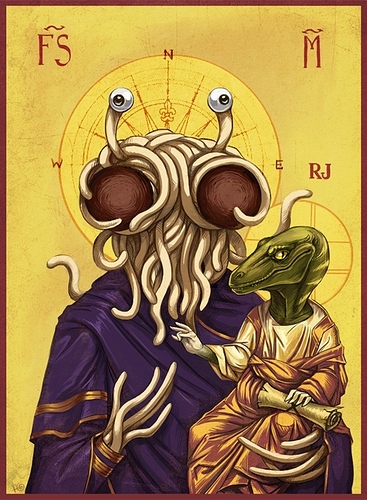 Let us faithful discuss the teachings, doctrine, dogma, and lessons from the one true church.

I will start us off. Are the Beer Volcanoes a literal or figurative description of paradise? Is there any evidence for the actual existence of beer Volcanoes, and if so, where does the barley grow? Are the Volcanoes a result of over active fermentation?

14 Likes
Quotes on religion and the mythical Christian solar god Jesus's association with the Sun
ChuckV December 29, 2015, 3:12am #2

That both the Italian pasta and the Arab are made from a style of wheat originating in Africa rather than European wheat renders that origin story even more likely.

My son, all of your questions shall be answered as you tread the Holy Lasagna road to pepperonichi gates of heaven. You must have faith to gain the strength to stride the straight and very narrow. Until it becomes a tangled mass with the great flying spaghetti monster.

Remember, when you see only one set of footprints in the sand, that’s because the flying spaghetti monster floats. As it won’t denigrate itself to the 5 second rule.

Thus saith but a humble mouthpiece. In the holy name I prey, Ra’men.

Don’t you think that stories of the monster naturally occur in humans, due to hunger, tomatoes, fresh herbs, and cheese?

I am still holding out and waiting for the pleasure ships of JHVH-1 to take me away to live with my yeti descendant kind.

“I don’t practice what I preach because I’m not the kind of person I’m preaching to.” - J.R. “Bob” Dobbs

I remember as a younger me visiting local bookstores and moving copies of the Book of the Subgenius and moving them from the “Humor” section to their proper home in the Religion section.

The only reason I’m not an ordained Minister of the Church of the Subgenius is that I keep forgetting to pay my $30.

There are no rules against Red Wine in the Church of the FSM? Are there?

The beer volcanoes are literal and just are. The beer will taste as you desire it to.

I’ll be hanging out at Mt. Old Rasputin if anyone needs me.

Are the Beer Volcanoes a literal or figurative description of paradise?

Poor little deluded dupes…
It all flows out of Egypt.
The ancient ones gave us the power to create heaven on earth - all it takes is soaking the pyramids with liberal quantities of water. All of the stored grain then ferments until it bubbles forth from the top - beer volcanoes!

So the pyramids aren’t for grain storage, but for malting!

I mean, there are so many other options!

This topic was automatically closed after 417 days. New replies are no longer allowed.