Dude, what the fuck? 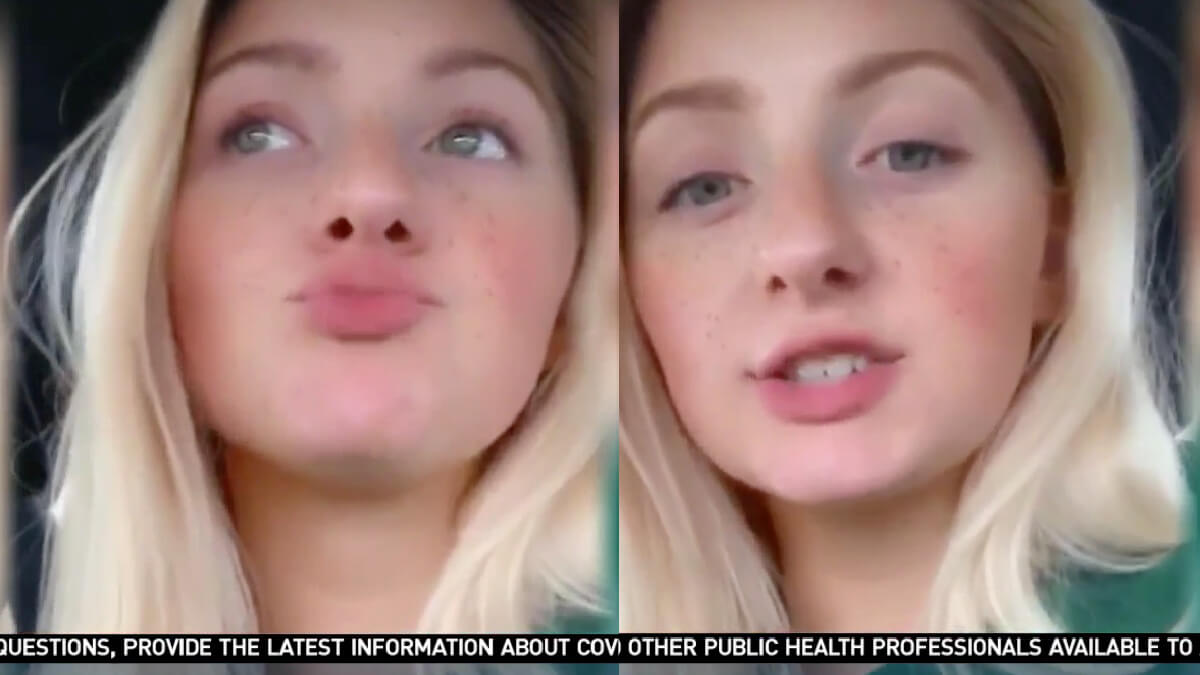 Woman who bragged about not social distancing catches coronavirus

Young Americans are starting to realize the seriousness of the coronavirus. This week, it was a 21-year-old Nashville woman Ireland Tate.

Maybe the resident of the White House shouldn’t have been dismissive of how serious this is. This may not stop for her even after she hopefully recovers - she could have limited lung function for the rest of her life. 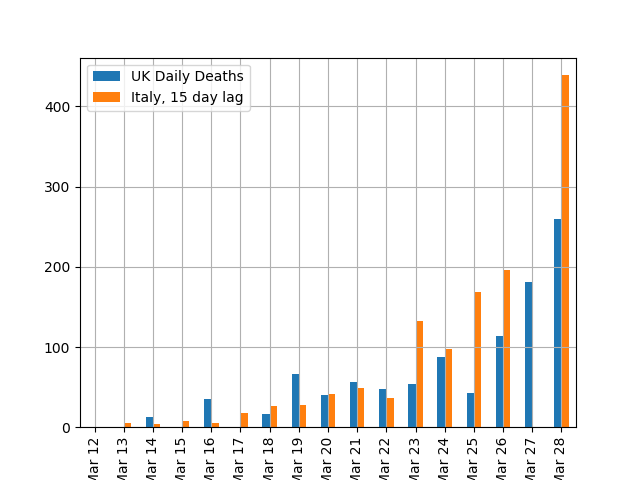 The data is still a bit rough in both cases, but by my reckoning, the UK is about 15 days behind Italy on the deaths curve.

Unless you filter for senior government officials, then the UK pandemic seems to be well and truly ahead of Italy.

meanwhile, in the united states 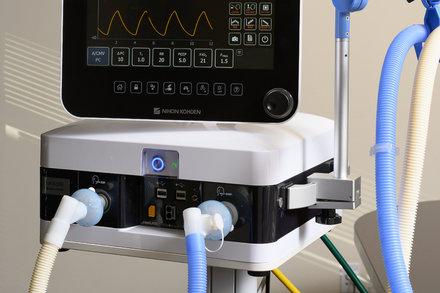 The U.S. Tried to Build a New Fleet of Ventilators. The Mission Failed.

As the coronavirus spreads, the collapse of the project helps explain America’s acute shortage.

In April 2012, a senior Health and Human Services official testified before Congress that the program was “on schedule to file for market approval in September 2013.” After that, the machines would go into production.

The medical device industry was undergoing rapid consolidation, with one company after another merging with or acquiring other makers. Manufacturers wanted to pitch themselves as one-stop shops for hospitals, which were getting bigger, and that meant offering a broader suite of products. In May 2012, Covidien, a large medical device manufacturer, agreed to buy Newport for just over $100 million.

Covidien — a publicly traded company with sales of $12 billion that year — already sold traditional ventilators, but that was only a small part of its multifaceted businesses. In 2012 alone, Covidien bought five other medical device companies, in addition to Newport.

Newport executives and government officials working on the ventilator contract said they immediately noticed a change when Covidien took over. Developing inexpensive portable ventilators no longer seemed like a top priority.

Newport applied in June 2012 for clearance from the Food and Drug Administration to market the device, but two former federal officials said Covidien had demanded additional funding and a higher sales price for the ventilators. The government gave the company an additional $1.4 million, a drop in the bucket for a company Covidien’s size.

Government officials and executives at rival ventilator companies said they suspected that Covidien had acquired Newport to prevent it from building a cheaper product that would undermine Covidien’s profits from its existing ventilator business.

This probably should have its own thread.

Agreed. Best I can do for the next coupla days is this:

Continuing the discussion from A round up of Trumpian events

and it looks like you’re on that thread (yay!).

If Trump is really forcing the disestablishment of a reservation for personal gain, that might just be the worst thing he has done while POTUS.

I’d add his approval of construction/operation of the Keystone XL pipeline over one of the biggest freshwater aquifers in North America–definitely right up there, regrettably. Irreversible contamination would damn untold generations in some far lengthier version of Flint. That pipeline has dumped petroleum twice already.

Is that name a just a coincidence?

Yes, it’s a coincidence. The name goes back to 2007 when Tyco Healthcare was spun off the conglomerate Tyco International, when the three main Tyco branches scrambled to re-brand after the Kozlowski scandal. Tyco Healthcare was a combination of a huge number of acquisitions, including Kendall, US Surgical, Mallinkrodt, and Puritan Bennett.

Covidien is now under Medtronic. 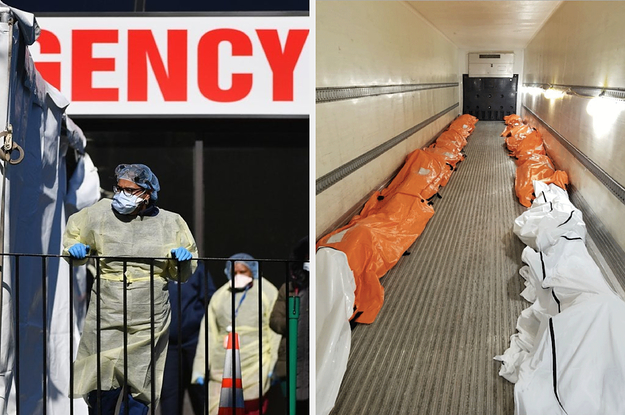 A Nurse Shared A Harrowing Photo Of COVID-19 Victims To Show How Horrifying...

“It is the ghastly reality of what we deal with and where some of us have ended up already,” the New York City nurse said.

Hah! It’s one of those bullshit trademarkable kinda-words that companies paid consultants millions for back in the early aughts. See also “Altria”.

Looks like infants may not be immune, although investigation is pending and one can never be certain about statistics from China. 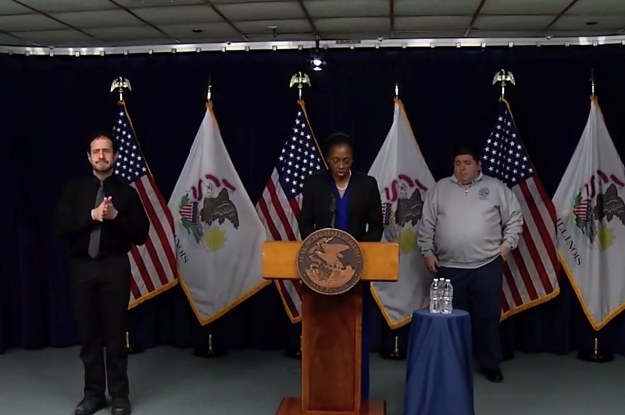 “If you haven’t been paying attention, maybe this is your wakeup call,” said Illinois Department Of Public Health Director Dr. Ngozi Ezike.

They still do. It’s just that the trend in branding/naming has shifted from cobbling together a nonsense word from 2-3 real words (Covidien - cooperation - provide - ambien(?)) to a completely unrelated word that you take over (Uber/Bird/Lime/Twitter/Slack).

Well, the “problem” with the latter is that they are regular words, and therefore not completely trademarkable: only in conjunction with a subject or logo.

I’m sure the people who dreamt (hey Google, dreamt is a fucking word you stupid, lazy twits) up Covidien hoped that they could then use that trademark to prevent journalists from referring to them. Not an unreasonable idea given the direction of IP law in the last 30 years. 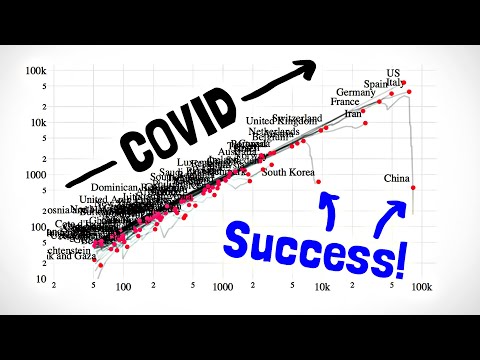 This is a good explanation of how to spot bullshit graphs in all the horrible news stories you're reading, and how to interpret them properly. Minute Physics: It's particularly egregious that so many news reports are comparing number of reported...

Just one thing re:data gatherers - while I haven’t had the time to play with the numbers myself, colleagues and friends are. And the report they are livid due to the delivery of the data, e.g., by the ECDC. Badly standardised Excel files, e.g. proprietary software and no checks of data consistency. Changing variables. Changing location of the files.

I’ve seen similar from people in the US. Someone complained on twitter that even the DATE wasn’t standardised.

The media noticed some two weeks ago that Johns Hopkins University data and Robert Koch Institute data weren’t comparable, and some media even tried to explain why.

However, communication-wise and for all analysts, this situation is not only annoying. I find it at least slightly dangerous. Conspiracy stuff will grow on this like hallucinogenic mushroom on a bull’s faeces.

Not surprised. I worked for the US census in 2010 and the federal gov. sent us data in the form of a huge text file. Some of us cobbled together a program to extract the needed info and put it in a spreadsheet file.

On Wednesday, Republican County Commissioner Marvin Rodriguez suggested that the new coronavirus isn't serious in Kansas because the state does not have a lot of Chinese people.