Overgrown sheep caught in a bush is sheared back to safety

Argh. We need closure on this with a well shorn sheep and a pile of wool by the side. Looks like all of it is pristine other than the stuff on the outside. Wonder how many sweaters you can make…

I’m not even a marxist animal husbandry theorist and I can still recognize the absurdity of a breed that can only survive by exporting its contradictions.

It only survives and thrives because of its ridiculous hair growth.

If it didn’t do that, the species would be an obscurity, possibly heading to extinction.

Evolution. The way to survive it to provide large amounts of hair for a hairless ape.

Well there is a difference between species and breed. Wild sheep survived without people to sheer them. But sheep have been bred to grow more hair. The characteristics that we have selected for in many species, from wheat to dogs have created breeds that could not survive in the wild. But the species survived before us and if they could make it through a few generations, they’d probably survive if we disappeared.

If a few of these sheep get together, might they form the semi-legendary Sheep King? “Are you going to shear that sheep?”
“No mate, I’m keeping her for myself.”

“Are you going to shear that sheep?”“No mate, I’m keeping her for myself.”

Amazing! The most recent ep of “Running Wild With Bear Grylls” (which I’m in the middle of right now) has Grylls and Michael B. Jordan literally sleeping with a sheep. For the heat, of course.

Maybe it’s not all that amazing.

Here. Before and After pics. http://edition.cnn.com/2015/09/03/asia/sheep-record-wool-shearer/index.html?eref=rss_topstories

found wandering in the woods near the capital.

It must have escaped from Parliament.

I wonder if I could get a plushie of this sheep? And maybe have it stuffed with wool from this sheep? Would that be cannibalism, of some kind of meta-hipster artefact? Curated! Artisanal!

This article doesn’t mention it, but his name is Chris.

Peadar Lamb as Fargo Boyle Peter Dineen as Giant Reid Pat McGrath as Hud Hastings Patrick Drury as John Rynagh O'Grady as Mary Eamon Rohan as Judge "Chirpy Burpy Cheap Sheep" is the second episode of the third series of the Channel 4 sitcom Father Ted. The episode's title is a reference to the 1971 song "Chirpy Chirpy Cheep Cheep," made famous by Middle of the Road. 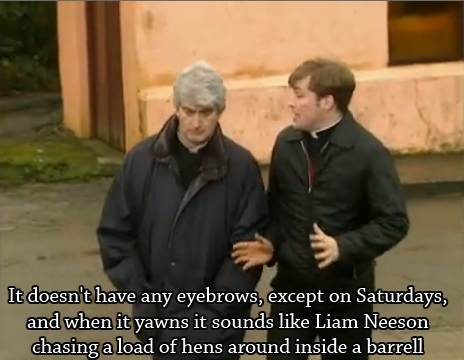 Along the board our gaffer walks
His face all in a frown;
And passing by the ringer says
“You watch, me lad, keep down!”

Ok thanks for the after pics - though they didn’t take one with the final pass and its all super short. What is the red stuff poking through? Skin issues?