Owner of oldest US brewery wins the hearts of trumpkins

haven’t drunk Yuengling in years and now never will again. I can find much better beers to imbibe.

No more Yuengling for me. Sort of disappointing.

Beer is not good for Younglings…

Beer is not good for Younglings…

Britain disagrees. It is legal to give a beer to a five year old here, as long as it is in a private space, although I expect that social services will get involved if you give a bottle of vodka to them.

Why even post this here? We only drink PBR.

Obama gives them all sorts of free publicity over the years, and this is how he’s repaid?

I hate Yeungling…I think their beers suck so bad its ridiculous.

This sort of makes it a permanent thing.

See, I’m torn. Their lager is one step up from a macrobrewery lager, and is served as such all over the Mid-Atlantic and outwards. It’s really not that great, and I bypass it most of the time. Same thing with most of their beers.

Their porter (and by extension their black and tan) is excellent. Can they branch that off to the Biden family (Yuengling is based not far from Scranton) so I don’t feel horrible drinking it?

Oh well, I guess I’m not trying that, then.

Which may be a shame because it always had a reputation as a better American beer, back in the day. However, now there’s been an explosion of smaller, innovative brewers, I’m not going to miss its absence one bit.

it always had a reputation as a better American beer

It’s pisswater on the order of Coors, you’re missing nothing. (Should this go in the unpopular opinions thread?)

(I say this as a Canadian - back in the day, good Canadian beer was just as rare)

A pretty good breakdown of it at Good Beer Hunting: http://goodbeerhunting.com/sightlines/2016/10/26/yuengling-brewery-wants-trump-to-win-which-is-weird-unless-you-know-aything-about-them

This sucks. My favorite is Yuengling Black & Tan. Not anymore. Fortunately, I have plenty of alternatives…but Yuengling B&T is, to me, the best cheap beer around.

Lagers are the worst…so this makes perfect sense.

Provides great context, thanks for the link.

Contra @IronEdithKidd, it’s a teeny tiny little step above pisswater like Coors or Bud. It was my choice for cheap beer before reading the goodbeerhunting article linked by @baker2gs. I don’t actually care about whether the owners prefer Trump or Clinton, but that article convinced me it’s not a business worth supporting regardless of the owners’ politics.

Also, I’d like to plead for others to be less polarized by the Trump vs. Clinton divide. Politics in this country is already hopelessly polarized and if people decide to boycott businesses and similar due to political differences, this polarization will only get worse and so will governance. Never mind it’s hopeless.

Damn. Now I won’t be able to think of Yuengling anymore without seeing Douchbag Von Fuckface standing next to the owner (or is that Thurston Shitbag the 3rd)? We actually did get it occasionally as the “at least it beats bud lite” fall back choice at restaurants with severely anemic beer selections.

But… no more. Maybe boycotting a business for their owner’s politics is overly polarizing–and I’m sure a lot of products I regularly buy come from companies run by idiots and/or racists and/or misogynists–but most don’t make it so obvious. Why wouldn’t I choose another beer given a choice now that I know they stand by Trump and all he represents?

And there’s so many better options out there… 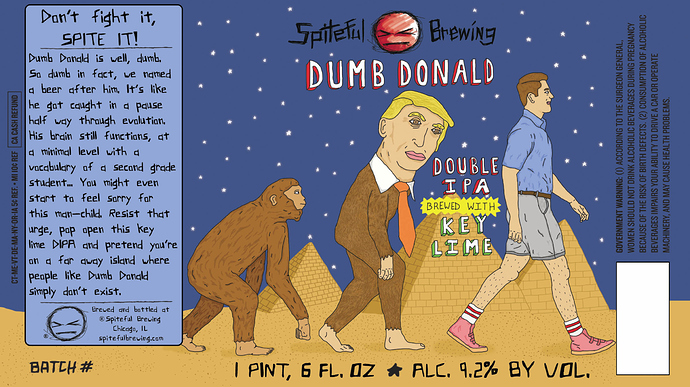 Pabst is only good out of keg. But if you really want beer, come to Germany.

In case you have never had one and were wondering what it’s like, or are planning on boycotting the brand now, here is a simple formula so you can mix your own: