Pies Are Round: why a big pizza is a better deal

I am always disappointed when I see somewhere offering pies and then it turns out to be pizza.

That said, when we do get pizza, we get large ones. Provides breakfast and lunch the next day too

Sorry but that’s not what exponential means. If it grows like r^2 then it is polynomial

This is news? The only thing that chart teaches me is there is an untapped market for 22" pizzas.

I figure they ought to have pizzas in all the sizes TVs come in nowadays.

I’ve always known this, and while I’m not one of those “I’m so smart and that’s old news!” people, I’m really trying to keep this fact under the radar of Big Pizza.

Quantity of food/calories, sure. But the crust near the center (IMO) tends to suffer on larger pizzas. And even though I’m a big guy, I just prefer small food. But that’s just like my opinion, man.

What about pizza weight as a function of number of toppings? 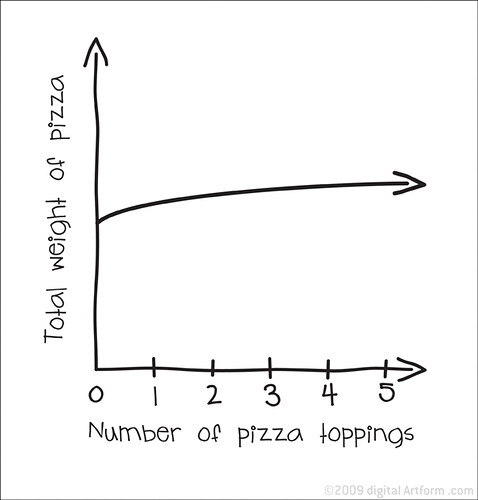 I don’t know about going bigger than a large, but one thing is clear to me:
Never order a small or medium pizza.

Smaller pizzas suffer from the wrong crust to non-crust ratio. Additionally, they often end up too thick/bread-y and without any crisp crunch.

*Does not apply to artisanal pizzas, which are a different beast altogether.

So, something like 20 data points per restaurant? Small, medium, large, extra large… what else? It wouldn’t make sense to talk about toppings in this context, would it?

Yesterday I saw generic coffee on sale - 25oz $5.99. The smaller can was 11oz for $5.99. Yes, they were actually the same price; even the regular price was only a dollar higher.

I’ve always assumed that meant the cost of the can far outweighed the cost of the coffee, but it’s more likely the cost of marketing and shelf space. I’m trying to figure out a way to arbitrage the two and get paid for not drinking any coffee at all.

Unless you chose the same topping set across all pizzas.

Thanks for pointing that out. Words have meanings There are rules. This isn’t Nam.

Leaving aside that minor usage gaffe, why has this story been picked up by so many sites? It’s usual for the larger package to have a lower unit price. Pizzas are no exception. It doesn’t have much to do with the formula for the area of a circle. And ignorance of that formula is not the main reason for ordering a smaller pizza.

One of the lessons I learned (that stuck) as a 14-year-old in basic economics was Marginal Utility when our excellent teacher had a volunteer eat as many chocolate bars as he could, and rate how much better each one made him feel.
Bigger may be better in a raw cost-benefit analysis, all other things remaining equal, but if you end up struggling to get those last slices down, you are setting yourself up to be unhappy with the experience.
Leaving waste brings me down (though leftover commercial pizza is also a good thing says science)

This is probably because energy and labor inputs account for the largest slice of the pizza-baking ahem pie, and ingredients are way down on the balance-sheet.

Based purely on this remark, it sounds like a solar powered robotic pizza oven would drastically increase your profit margins. (At least until competition brings the price down, in theory passing on the savings to the consumer.)

Someone get on this. I want cheap, clean, solar pizzas.

The weight of toppings will still increase on the square of the diameter assuming they’re equally distributed.

Having used a calorie-counting app before I was aware of this. It´s better not to log pizza at all though, takes the fun right out of it.

of course most volume per dollar isn’t my definition of a better deal, i don’t order the thickest crust possible to get the most cubic inches, more volume isn’t always more, capiche?

better deal = loaded toppings with all the toppings you love plus extra cheese if you like that because better pizza is the better value. I’d rather have less of something i like better then more of something crappier. i don’t eat at the cheapest pizza places or only frozen pizza because volume per dollar isn’t the real indicator of value. quality has to be the primary factor or forget it. not to mention that all this gets way more complicated when you consider that most pizza places offer a second pizza at a discount, and cheaper addons that add more volume filler (if that is what you are going for) at a lower price then bigger pizzas like bread sticks etc.

I’ve found a bottle of generic bottled water (I avoid advertised generic/commodity products - I hate the ads and I refuse to pay for them) where the 4l jug was the same price as the 1l bottle. Yikes!

Worse still: I was looking for a small bottle of javel water. It was priced higher than the three-times-as-much bottle! Now, I buy it in dollar stores.

/how is it that the spellchecker never heard of the word ‘javel’?