Pilot of single engine plane loses engine, glides into airport like a boss

I was thinking, didnt i just read this? 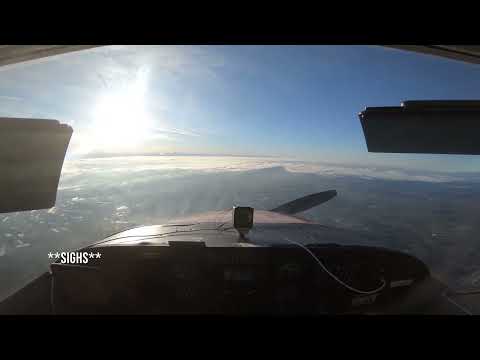 Watch a Cessna pilot land with no engine | Boing Boing

The pilot of N78Z handled this engine failure with nerves of steel. When his engine dies and pumps smoke into the cabin, this pilot remained calm and in control. It is almost routine.

Pretty crappy that his insurance won’t cover the engine repair, but I’m pretty sure that if my truck’s engine quit while I was driving down the road my insurance wouldn’t cover that either. Of course I’d have the option to pull to the side of the road usually. He may as well use his internet fame to crowdsource funding, because why not.

Call me paranoid, but I’m immediately suspicious of of any “brave pilot captured on YouTube” since this happened.

Not to belittle or detract from the pilot’s cool handling of the crisis, but an aeroplane doesn’t just stop flying in the event of an engine failure. It turns into a less than perfect glider.

9,000 ft is pretty high up for a Cessna and all that altitude gave the pilot both time and distance to work a solution.

But well done to the pilot for keeping cool and putting his training into practise.

Following up what is an interesting story with a request for GoFundMe donations to fix the broken engine (because they have no other choice) does make it seem a bit sus.

GoFundMe donations to fix the broken engine (because they have no other choice) does make it seem a bit sus.

The photos at the end of the video show a comprehensively damaged motor. I expect that there would be interested parties on the ground who would have taken a look at it after he landed.

So it seems likely that the story is true, 'cos the motor was obviously working when he went up there.

I hope he was wearing the brown pants.

A gofundme is a refreshing alternative to the typical lawsuit against any party who may have touched the engine previously, regardless of liability.

Maybe he can still pursue a lawsuit if the cause of the catastrophic engine explosion can be determined. Unless he services his own engine, and he is at fault (with or without negligence).

I expect the FAA is gonna want to know a LOT about an in-flight engine failure THAT catastrophic so the issue isn’t just “my insurance did cover it” but WTF happened! Yeah, a 9000 feet in a Cessna there was excellent opportunity to walk away from the failure… Even so, the FAA takes VERY seriously the most minute possibility of planes falling out of the sky. Unless it’s a 737.

I’ve glided into airports (mostly like a boss) hundreds of times in aircraft that could (if the weather gods cooperate) fly faster, higher, and farther than these Cessnas, but they were gliders, that is their nature. Most people aren’t really aware of the real costs of owning a small Cessna (or equivalent), roughly:

A full engine rebuild for your Cessna 172 is now around $25K. A rebuilt engine can last 2000 hours if you are very careful, or 1 hour if you mess up (check your oil!). If you plan on keeping the plane, it’s smart to set aside a certain amount of dollars every flight hour towards that inevitable cost. Or, keep it until the overhaul is near, then sell it to the next victim. Engine failures happen, one needs to be prepared for them. I live in an urban part of the Bay Area and lots of pilots like to buzz overhead in their new toys at 1000 ft or so to show off for their friends. All I can do is shake my head and wonder what they’ll do if the music suddenly stops.

Exactly right. From 9k feet you can glide many miles, perhaps many airports are in reach. And pilots train to land with power off after unexpected engine stoppage as well. Old timers flew tight traffic patterns and routinely landed deadstick from unreliable engines. Still, most pilots do use power on final approach, except for gliders, so kudos for doing it right with your pilot skills in a high stress situation. Only one shot at it.

I know it seems really cool that this pilot landed safely, but honestly, if a pilot CAN’T do this, they shouldn’t be flying a plane.
My Mom and Dad were not far into their pilot training, when his plane stalled just after takeoff. They were at only 500 feet. He turned around and landed on the runway he just left.
He had time to call the tower, but not enough time to hear back the approval to land.
But ya gotta do what ya gotta do.
He kept flying from age 60 until the week before he died at 86.

Regarding the landing on display; I always find it shocking how fast things get as the ground gets closer.

A full engine rebuild for your Cessna 172 is now around $25K. A rebuilt engine can last 2000 hours if you are very careful, or 1 hour if you mess up (check your oil!). If you plan on keeping the plane, it’s smart to set aside a certain amount of dollars every flight hour towards that inevitable cost. Or, keep it until the overhaul is near, then sell it to the next victim.

Not unknown, but based on what I have seen, there’s not as much FAA interest in General Aviation incidents as I’d thunk. Here’s a good series on an engine failure and aftermath

(spoilers: everything turns out ok)

I don’t doubt your figures but, from the context of cars, the idea of an engine(not even a terribly big one, under 200 horsepower doesn’t put you into the realm of terribly heavy equipment or crazy mining gear) where 2000 hours of operation after $25k worth of maintenance counts as being on the high end feels very low.

Is there something fundamentally more demanding about being an engine for aviation purposes; or is it a product of being a relatively niche market where regulatory certification for changes is expensive; and so GA engine reliability exists largely unchanged from the time when periodically doing fairly invasive things to your engine, rather than expecting life-of-vehicle barring external violence or egregious failure to replace consumables, was also normal for vehicle engines?

THAT is merely perception… Movement looks slower where things farther away. Up close the speed become more evident. It’s part of what pilots are trained to compensate for.

Daddy was a pilot.

Just because we don’t hear a lot about it doesn’t mean it doesn’t happen. The FAA does an investigation on every incident, pulls every available log and make records of it all. It may be a year (or more) before the records become available, but they’ll be looking into this.

Pilots and aircraft mechanics HATE this so they work REALLY hard to make sure things don’t happen the FAA will look into.

or is it a product of being a relatively niche market where regulatory certification for changes is expensive; and so GA engine reliability exists largely unchanged from the time when periodically doing fairly invasive things to your engine, rather than expecting life-of-vehicle barring external violence or egregious failure to replace consumables, was also normal for vehicle engines?

Yes. The FAA is basically a huge bureaucratic system of certifications for pilots, planes, engines, mechanics, replacement parts, and airports. All mostly in the interest of making sure planes aren’t falling out of the sky all of the time. It may be overkill, but for the most part it works (737 Max 8 excluded). When a certified engine is rebuilt (a “major overhaul” in aircraft terms) every replacement part used must have been manufactured under a specific certificate for installation in that particular engine design and all work must be logged and signed off by a certified mechanic. Cheap knock-off parts do make their way into the system which does sometimes result in premature failures.

Oddly, there is a parallel universe of “experimental” aircraft that fly without these certifications under “special airworthiness certificates”. Most of the gliders I flew fell in that category, as it’s hugely expensive to obtain FAA certification for aircraft that will only be produced in tiny numbers. A full-on aircraft certification, even for a glider, is a multi-million dollar multi-year process. There’s a price to be paid for taking that route, I’ve lost friends to things as simple as use of a non-aircraft grade bolt in a critical control system.