Police detain kangaroo on the loose in Florida

I’m sorry, but after “Tiger King”, animal-related nonsense in Florida is really going to have to step up its’ game to impress me.

You probably can’t own a kangaroo in Florida, but since Florida’s unofficial state mottos are, “You aren’t the boss of me,” and, “Hold my beer and watch this,” well…

That kangaroo should have known better before trying to buy at McDonald’s without a mask.

Oh, man, I’ve watched enough T.V. to know the police horses were using the kangaroo to smuggle in drugs, probably PCP. This just seems so blatant that I would be surprised if Internal Affairs weren’t already looking into this.

I was struck by how (relatively) calm and gentle the officers were with the kangaroo. Now, compare that with the videos we’ve been seeing of humans (especially BIPOC/protesters/etc) being arrested and subdued.

In particular, note how no one put their knee on the kangaroo’s neck for 9 minutes…

A Davie man who was moving and did not want the animal anymore.

One shouldn’t own a pet if one is not willing to be responsible for its care for its lifetime. Just sayin’.

He may have been “moving” into one of Florida’s state penitentiaries.

This looks like a very small, very tame kangaroo. It let the police walk right up and catch it. Last time I saw something like this was in the high rise parking structure at Melbourne Airport, where a kangaroo had gotten lost, and people were trying to catch it without scaring it enough that it would try to jump out of the building. It took at least an hour that time.

I forgot to tie me Kangaroo down, sport.

This looks like a very small, very tame kangaroo. It let the police walk right up and catch it.

The trick to catching a small marsupial is to appeal to its natural love of pouches.

Well yeah there was a video on reddit a few days ago where these guys went to a lot of trouble pulling a small 'roo out of a trench. It hopped a small distance away and dived straight back in. Probably the reflex you allude to here. 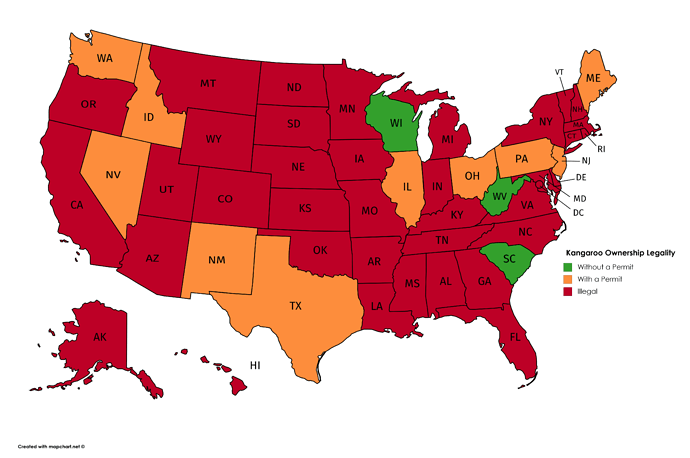 Has a darker tone that song when you consider it was written by a convicted pedophile aka Rolf Harris.

This looks like a very small, very tame kangaroo.

Yep, that it is. I find nothing sadder than to see domesticated roos, such weird and powerful animals that only seem to make sense in their pack or ‘mob’ and on their land.

Even in semi-suburban areas if you were to approach this fella in a ‘mob’ of roos, it would be the alpha roo that would try to eviscerate you.

Also, fun fact… the males have an articulated penis and the females have 3 vaginas.

Why are police doing this instead of Animal Control? Putting an animal in the back of a squad car is difficult and unsafe and they don’t have the right equipment or training to capture an animal like that (which could have been wild for all they knew). This so symptomatic of everything that’s wrong with the police right now. We’re sending them out to do everything.

This, exactly. People ask “well, who are you going to call when…” Hmmm… I don’t know. Maybe people who are trained as specialists in that area. So, if we take the police budget and divvy it up on well-trained specialists instead of terrified and heavily armed trigger happy power-trippers for everything, we might see suddenly just how little we do need police.

Feral tigers would solve a lot of problems with “Florida Men”