Police have trouble busting down door

Maybe they should have started on the hing side? I bet there was a bar across the center of the door horizontally and maybe even vertically. That door seemed quite resistant to their advances!

I don’t think they heard them knocking.

Maybe it opens out and wasn’t even locked.

This should be an advertisement for that door. Also, I kind of wish this would’ve ended with them just trying the knob…

The door eventually swung open from its top edge, which says something about where the extra hasp was placed.

No, it doesn’t open outwards. That’s really obvious by its placement deep into the jamb.

Perhaps they should have tried the doorbell.

I love the little pat on the shoulder the last guy in line gives to the door-slammer on the way in. “Attaboy Pablo! That was a real humdinger, huh?” 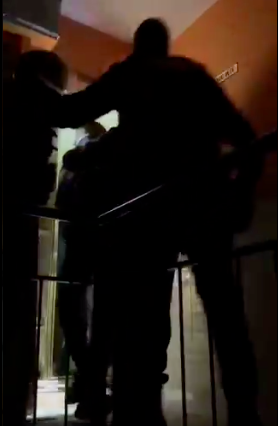 dammit, WHERE is the gif of Fezzik busting open the door for Inigo when you need it??

That’s one hell of a door. Wonder how it was secured. I’m sure mine would be knocked in with one blow, but I have one of those things you put under the knob that makes it much more secure. Only works when I am home, though.

That reminded me of the scene in the book, Ready Player One, where the protagonist is waiting behind his titanium-plated War-Door, as the IOI forces start trying to enter.

The tail end clues one in on what’s going on with the door, approximately. It has latches on what would usually be the weaker points of the door as far as busting one in, makes for a very amusing video and if anything its a good demonstration on properly securing a door. 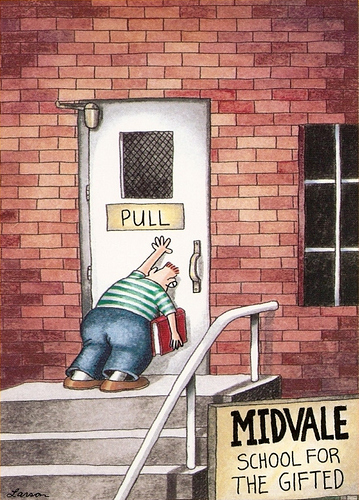 I’m so confused by the doorknobs in the center of the door. What’s the benefit to that?

THANK YOU. i looked, i swear. i knew it had to exist somewhere!

Resistance of the door aside, it certainly appears the cops are mistaking that apartment for a clown car, if not the Tardis.