Sounds like somebody screwed up and marked her car as “searched” when it hadn’t actually been searched. Whoopsy!

All I got returned when I got back my stolen car was everything that wasn’t bolted down missing and a fucked up steering column I had to replace.

Wait, I know this one!

'Fred buys a second car at a police auction,
unaware that the vehicle is also being sought by a gang of jewel
thieves, who think stolen jewels are hidden inside. Fred is captured by
the gang and sends Dino for help, then manages to escape. Wilma, Betty, and the police arrive on the scene just as the gang catches up with him a second time.’

Wouldn’t it be more logical to pocket the stuff, sit on it for a while for case somebody realizes what did happen and comes asking, then using it as found fit? Having a stash of a local anaesthetic and a weapon can be handy when times get tough.

Damn, why don’t I ever fall ass-back into drugs and money like that. I gotta work for it and everything.

Leave the gun take the cocaine.

/Just kidding, I hate cocaine. I just love the way it smells.

You’re gonna have to dissolve that crack in a non-polar & recrystallise it with HCL if’n you want a topical anaesthetic. Personally, I’d have gone, ‘Sweet! Free crack!’ and smoked it. I mean, how often do you get free crack?

Personally, I’d have gone, ‘Sweet! Free crack!’ and smoked it.

Gotta dispose of it one way or another.

Exactly. Think of the children. Actually, I’d be trepidatious of crack these days because of the tachycardia and the ‘fuck there’s no more crack’ feeling when it’s gone, but if I found opiates, I’d ring in sick til they were all gone.

You’re gonna have to dissolve that crack in a non-polar & recrystallise it with HCL if’n you want a topical anaesthetic.

“First one’s free!”, just like with that anti-virus software.

A knife sounds useful, but especially in Canada, I’d rather the police officially take back the gun and give me a receipt saying it was their mistake that left it in my car. Don’t know if lead pipes count as illegal hazardous waste like they would here in California.

Never tried cocaine (caffeine’s about as far as I go in that direction.) If they’d had the decency to leave a bag of weed instead, I’m sure I would have totally not noticed until later. 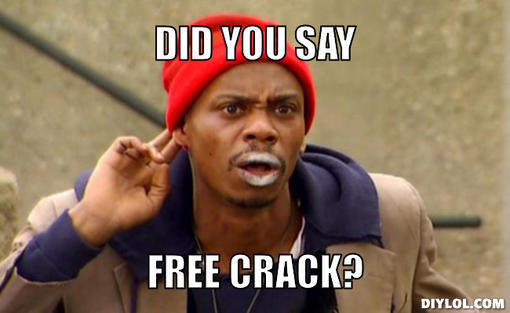 Sorry about that Creedance tape.

Don’t know if lead pipes count as illegal hazardous waste like they would here in California.

You can’t have even a stupid lead pipe in Californistan? How do they think it counts as freedom?

Legal or not, lead pipes are TERRIBLE for smoking crack.

Legal or not, lead pipes are TERRIBLE for smoking crack.

Glass is better. Lead pipes are better for xray collimation, some electrochemistry electrodes, or beating the dealer who provided substandard goods.