of course it can, especially if the coach–and presumably the administration-- is white and the players are black. 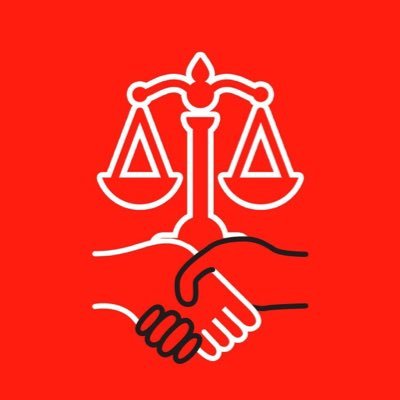 Made it into the news lawnewz.com/first-amendmen…

One wonders: what was he fighting for, if not freedom?

One wonders: what was he fighting for, if not freedom?

This is the ultimate irony for me. If you’re fighting for freedom (and I am all about respecting those who have fought for my freedom) this is what you were actually fighting for. 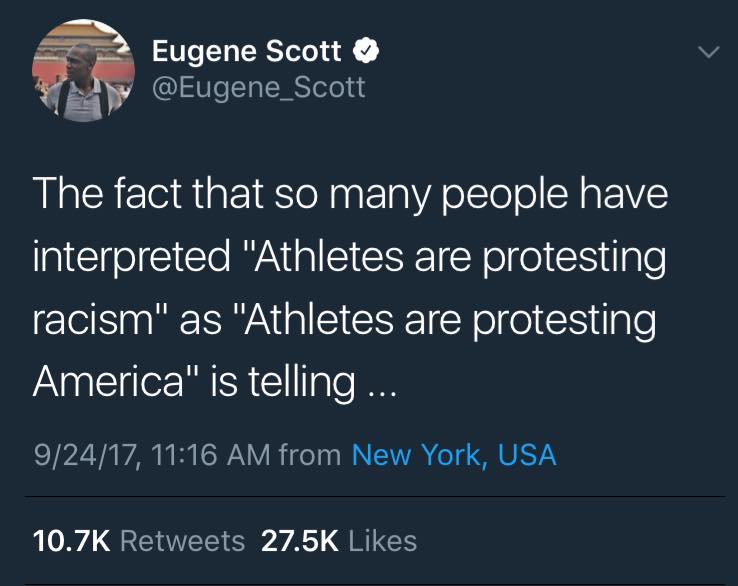 Works both ways, doesn’t it?

If he wants to claim he was “fighting for freedom” (and no way is he old enough to have fought in WWII, much less the War Against Slavery) then why is he not respecting it? And if he was not fighting for freedom, why should we treat that as deserving of deference?

It’s been a while since “I killed people in other countries for the profit of John Company” was openly respected.

"If you miraculously find a place to protest, find an inoffensive phrase and include people from all groups, you should still be mindful that there is a list of things that the overprivileged value more than your life, freedom, equality or happiness. Your civil disobedience must not offend or disparage any of the following: flags that represent America, flags that represent traitors to America, monuments, names of buildings, statues, stained-glass windows, cats, American flags, 150-year-old songs, freedom of speech (but only their freedom of speech, not yours), bathrooms, dogs, the children (not children, but “the children”), the Founding Fathers, first responders, blue lives, religious freedom (Christian only), traffic and troops.

Especially troops. Wypipo love troops. They can watch a cop shoot an unarmed person in the head and see the brain matter splatter on his or her baby in the back seat and feel no empathy, but burst into tears when someone shows them a clip of a dog licking a soldier’s face when he comes home from killing brown people somewhere in the world protecting their freedom."

How to Protest Without Offending White People

Many people were surprised when President Donald Trump suggested that NFL team owners fire players who quietly choose to sit out the national anthem before games, but I was not one of them.

You know, the important freedoms that are always at risk.

It should be obvious, but enforced patriotism is not sincere.
Wouldn’t these fans and coaches be happier if people saluted the flag because they really-really wanted to?

This why I’m not a fan of patriotism or sportsball.

I don’t think anyone with a lick of sense buys the idea that they’re fighting for anything except the goals of the wealthy.

However, the main propaganda point the military fetishists tends to beat on is “Fighting for American freedom”. Which makes, “You using your freedoms insults the military!” something that needs to be slammed repeatedly into the faces of the people using vets/the flag/ freeeedoommm! as a way to keep black people from protesting.

Are you working within the system of American militarism, or are you trying to bring the whole system down?

Once it was stated that a private school removed them from protest it was unnecessary to identify it as christian.

Oddly I thought ol’ jezuuz was all about protesting shit…pissing off the government big wigs and religious assholes. These two kids had the balls to stand up in texas and mock flags and football. Good on them. The flag is just a rag until the alleged values it’s supposed to represent are upheld.

As a retired Veteran of the USAR, I take no issue with what we’ve seen Kap and other athletes do as of late. I didn’t serve so that people would salute me or thank me. I didn’t serve to get a day off once a year or a discount at a restaurant.

I served to honor and protect those rights.

“The science of government it is my duty to study, more than all other
sciences; the arts of legislation and administration and negotiation
ought to take the place of, indeed exclude, in a manner, all other arts.
I must study politics and war, that our sons may have liberty to study
mathematics and philosophy. Our sons ought to study mathematics and
philosophy, geography, natural history and naval architecture,
navigation, commerce and agriculture in order to give their children
a right to study painting, poetry, music, architecture, statuary,
tapestry and porcelain.”

I didn’t serve so that people would salute me or thank me. I didn’t serve to get a day off once a year or a discount at a restaurant.

I served to honor and protect those rights.
{emphasis added}

Fuckin’ A dude, fuckin’ A

My own service was solely in the USAR, so my exposure was low, but I totally honor what you have just said.

If you’re fighting for freedom

Freedom? He was fighting for the flag - murderin’ folks so they’d show some proper respect for a piece of cloth! That piece of cloth represents the sacrifices of people like him who fought for the flag, of course, and thus the Ouroboros of flag worship disappears up its own butt.

Barry O did a lot of shitty things in the name of militarism… modern center right Democrat that he is… but the worst you can say about his full remarks at that townhall was that it’s very “Can’t we all get along?”

That he expressed that viewpoint after almost a decade of dealing with the Republican party is eye-rolling.

Yup, that quote is old and out of context.

The critique is valid, though. Obama’s first instinct was always collaboration and surrender. If you’re going to base your ideology on compromise and deal-making, you need to be good at it.

The NFL I can understand, but these are schools that employ history and government/civics teachers. At least I hope they do. But if they do, somebody’s not making any effort to set the record straight.