It’d be funny, if it weren’t so… unfunny.

“Just another demonstration that the Trump administration continues to actively try and divide the country over race.”

Race would have flown his own plane there.

Pence is no Race Bannon!

So…I keep asking this question to people who get outraged about kneeling…Did you serve? Were you ever in uniform, did you take the oath? If you saw yes to these questions and still feel outraged I then ask…Why do you think you served?

But its no…always seems to be no. The most outraged people are always NON-veterans (anecdotal evidence ofc).

Stop it. Stop deciding what is offense to a veteran if you aren’t one. Just shut up right then and there.

It’s the rules that are on the book in my opinion. 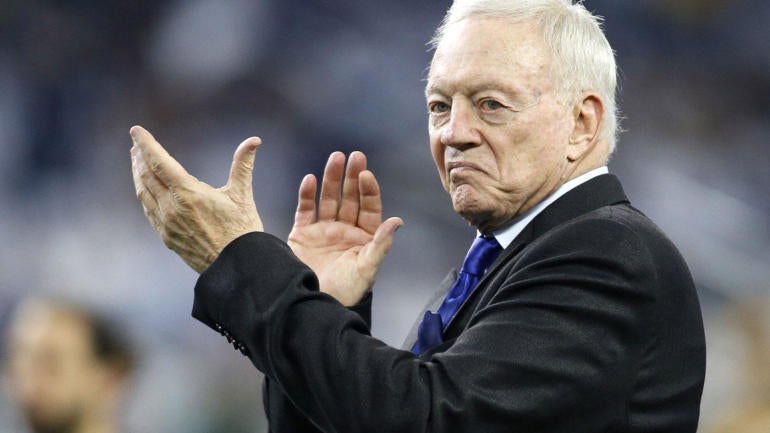 Cowboys owner Jerry Jones: Players who disrespect the flag won't be allowed to...

'If there is anything disrespecting the flag, then we will not play. Period,' Jones said

WHERE JERRY?! What rule is this? Can you point me to the law or rule on ANY legal document that says you must stand for the anthem? Which one?
.
.
.
This is why Alan and I are best buds…

So… it’s OK for the Vice President to stage a political protest during the national anthem, but not black people. Duly noted.

Trump is defending the transparently awful PR stunt as having gotten “great praise” (from whom, he doesn’t say) and accuses NFL players of not only disrespecting the flag, but “disrespecting the country”.

As they say, Trump, this is why they’re kneeling.

This is another textbook example of how the Right is allowed to co-opt, redefine, and eventually smother legitimate protest. Some tropes are so embedded in the American psyche that it’s necessary only to redefine the issue in those terms: Respect our Flag! Honor our Veterans! Support our Police! It never fails.

A network news crawl this morning announced that NFL moguls will punish players “disrespecting the flag.” See? It’s worked already. I’m sure the owners are breathing a sigh of relief. The few moments during which they pretended to back their players (locking arms, etc.) happened only because the fat cats hadn’t yet figured out how to protect their multi-million-dollar asses from public criticism. No problem now. The players are once more Scary Black Men threatening “our” nation, not American citizens reminding the country that the Constitution guarantees justice for all.

So…I keep asking this question to people who get outraged about kneeling…Did you serve? Were you ever in uniform, did you take the oath? If you saw yes to these questions and still feel outraged I then ask…Why do you think you served?

But its no…always seems to be no. The most outraged people are always NON-veterans (anecdotal evidence ofc).

No, I did not serve. But by Pence’s standard I think my father’s service puts us on equal footing.

Never once in training did anyone tell US Service people that Flag or the Anthem represent their service. Never once. The Flag and the Anthem belong to America. America is not solely service people and a bunch of leeches.

I have asked USAF, West Point and USNA grads if this protest reflects NFL players not respecting their service. I also asked friends who served as enlisted. Every single person I spoke to said no.

People who did not serve, like Trump, are making this up to distract from the real issue players are protesting.

I suspect we’ll see a whole lot of kneeling or players willing to be benched en masse.

absolute truth. Every one of my friends from my military service I have spoken to feel the same way about it as I do…
“I don’t like it, but it is their right to choose. I served to protect those rights.”

There is only one set of rules. ONE and it is for active service members. During the anthem we stand at attention and salute the flag (or its general direction) when outdoors, ensuring cover is on. If not in uniform, stand not at attention but at parade rest instead.

There is not a single other law or rule regarding this.

The current line of succession is a clown car:

Compared to what we’ve got, President Hatch doesn’t sound terrible.

Regarding the Dallas Cowboys, it would appear that the Stadium is owned by the City of Arlington Texas.
So CAN the owner of the Cowboys regulate their First Amendment Rights while in a Publicly Owned Building?

I seriously want to know because there are plenty of other Venues that I thought were Privately Owned but it turns out they are actually owned by either by a state, county, city government or a local authority.

Here is the issue though, he is saying “this is the rule” but it isn’t. And unless he and the NFL have rules governing this that are approved by the NFLPA…well…GOOD LUCK ENFORCING JERRY. Because the NFLPA will go after him on this and labor courts will absolutely side with the players on this one.

I have asked USAF, West Point and USNA grads if this protest reflects NFL players not respecting their service. I also asked friends who served as enlisted. Every single person I spoke to said no.

You can add another veteran’s “no” to your list.

the Anthem belong to America

Like so many things that are “American”, the Star Spangled Banner isn’t even American in origin. To Anacreon in Heaven

"The Anacreontic Song", also known by its incipit "To Anacreon in Heaven", was the official song of the Anacreontic Society, an 18th-century gentlemen's club of amateur musicians in London. Composed by John Stafford Smith, the tune was later used by several writers as a setting for their patriotic lyrics. These included two songs by Francis Scott Key, most famously his poem "Defence of Fort McHenry". The combination of Key's poem and Smith's composition became known as "The Star-Spangled Banner",...

Came across it on fb