I feel nothing but sadness and compassion for the people in Florida who did not vote this man DeSantis into office. I feel the same for the rest, just to a slightly lesser degree.

Well, there goes the last little cobweb of a shred of something resembling respect I had for the Republican Party. This whole pandemic has only proven what I thought were my most outlandish ideas about them being entirely corrupt, self serving and just plain ol’ evil.

Set aside all the back room dealing, corruption, and general Florida-ness of this, the idea that people can’t find enough to entertain themselves for a couple of months when we have instant access to the vast cumulative history of television, music, movies, book publishing, video games, social media, and on and on that we absolutely MUST risk an unknown number of people’s lives to have live wrestling twice a week is just plain gross. And I say this as someone who has spent the majority of the last 30 years watching wrestling. The people who are this desperate for entertainment aren’t actually looking to be entertained. They’re looking to pretend this reality isn’t happening. Distraction is one thing; this is delusion.

I am so glad I live in the opposite corner of the continent from Florida, and also not in the USA. My condolences to my family living in the States and to the rest of you living in the American madhouse.

I would love for Live Stream Wrestling.

I don’t mean the ability to watch Wrestling via a live stream, I mean both people are in a Zoom party, the camera set up to be the opponents view point, but being held by the wrestlers significant other or housemate, so it can be dynamic.

Part way through the match could be Zoom bombed as someone invades the match.

I mean, if the two wrestlers weren’t in the same room, it wouldn’t change that much…

XKCD has you covered …

Under my system, boxing and football suffered, pair figure skating still worked but had to adapt by dropping some moves, and pro wrestling was actually completely unaffected.

What? Are they talking about full stadium shows, with a crowd? I was watching a video about empty-arena wrestling; where they’ve been doing shows in an empty auditorium. It struck me that the Wrestling channels could use the lack of an audience to make their fights safer and more cinematic, by doing walkthroughs, retakes, framing shots, etc.

Whatever happened to that Marconi guy’s invention? Did that catch on?

The people who are this desperate for entertainment aren’t actually looking to be entertained.

As if they can actually remember that a repeated bout is one they’ve seen already. I mean, they are all exactly the same anyway. If WWE wanted to make fortune to could just deepfake the costumes on two wrestlers and then just show the same bout over and over, with different costumes imposed. Nobody would know.

It has what plants need.

Wow, thanks for posting. “My Girls” is still on my regular playlist. Haven’t heard from them in a while, so I guess it’s time to check-in.

The world of association football has coped, WWE can too.

Vince McMahon continues his decades long streak of being an unmitigated scumbag with no regard for the lives/health of his employees.

As I cast my eyes downward in shame, I just keep muttering to myself, “I do not know these people.”
~ Jefe (just Jefe today, please) 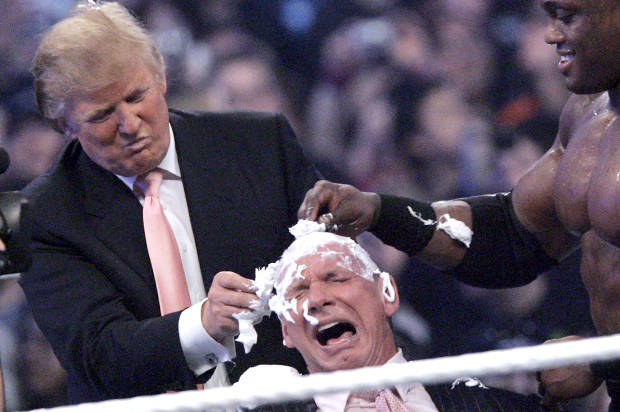